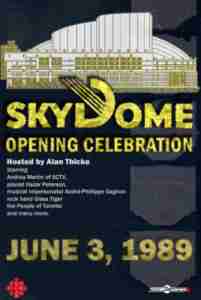 Broadcast nationwide on the CBC, The Opening of SkyDome: A Celebration — Andrea Martin and Alan Thicke co-hosted the 90-minute event on June 3, 1989, complete with songs written specifically for the celebration.  I was Stage Manager, responsible for marshaling over 5,000 performers and coordination on the stadium floor, staging and dressing areas.  During 4 months pre-production, I was stage manager for rehearsal space and scheduling.

Months of rehearsals in a huge Nut & Bolt factory in Browns Line preceded the event.

SkyDome (now called the Rogers Centre), the world’s first stadium with a fully retractable roof — is a multi-purpose stadium in Downtown Toronto, Canada, next to the CN Tower on the shore of Lake Ontario.  It is now the home to the Toronto Blue Jays of Major League Baseball (MLB).   A 1987 public contest (sponsored by the Toronto Sun) to name the stadium drew over 150,000 suggestions.

Construction began in October 1986 with EllisDon winning the lucrative lead contractor bid, and spearheaded by Chuck Magwood, president of the crown corporation formed to run the Dome.  Two years and $570 million dollars (in 1989 dollars) later, it was the first new stadium to open in the city in decades. It had that singular cutting-edge, retractible-roof technology, which was the only one of its kind worldwide. The multi-purpose stadium was a massively big deal at the time.

SkyDome opened on June 3, 1989 and the opening show aired live on the CBC hosted by Brian Williams.  It was a thunderstorm/lightning ridden night.  But we were prepared.  We thought.

The wet weather plan was to crack the roof open by a couple of metres at the northern end, over an unseated area (reserved for performers earlier in show), with special lighting effects and video of the roof opening test from the days before on the jumbotron screen, then a voice over “due to the rain, now we can close the roof to keep you warm and dry” to allow the show to continue.  The skydiving segment would then be cancelled by phone call to the airport to relay message to airplane above, replaced by fireworks from the roof for the TV segment, and the choreography adjusted accordingly for the 5,000 performers to space over the entire stadium floor.

Premier David Peterson ignited a button (actually a last minute prop made from a crew maglight flashlight with upturned dixie cup attached) for the roof to open, while Oscar Peterson played on a brand new grand piano centerstage supported by the Toronto Symphony Orchestra, as the lightning storm and rain came strong, sheeting down, but against pre-approved wet weather plans, the roof continued to open (at the insistence of Skydome President Chuck Magwood without our knowledge, and roof operators locked themselves in control rooms).

50,000 audience members in black tie got soaked while the show did its best to perform in a leaky boat, with stage dancers sliding down ramps like waterfalls to the concrete floor, roller skaters with metal rollers sparking on the steel plates covering high voltage electrical traps in the stadium floor now filled with water, TV cameras being covered with plastic sheets, millions of dollars of audio, lighting and other technical equipment scattered throughout the stadium was frantically being shut down, exploding or being successfully covered, and the skydivers seeing the roof continuing to open from their airplane above, and no way to contact us, assuming we changed our minds, decided to jump anyway, and drifted through a barrage of fireworks to land on top of performers, many in hand-made ancient ethnic costumes being soaked on the stadium floor.  Our crew (IATSE union from Ainsworth) were desperately racing around the stadium trying to get into the roof control rooms to stop them, while also shutting down all electrical that wasn’t absolutely required for basic safety.  Eventually even our clear-com communications system failed, and we migrated to walkie talkies only.

The continuation of the performance of the show became an afterthought, re-directed on the fly, much without stage audio or lighting effects, with safety taking priority.  We used multiple stadium voice overs to re-choreograph performers in stadium to clear areas once we noticed the skydivers were shockingly coming in.

All attendees of “The Opening of Skydome: A Celebration” received stuffed animal versions of the Skydome’s official mascot, Domer.  Lawsuits from both attendees (for dry cleaning bills of tuxedos and sequined dresses), suppliers (for equipment destruction or damage), performers (having traditional costumes destroyed, or medical bills from falls in stadium) resulted in SkyDome forking out $$$ to all and became the news for the next year while a disgraced Magwood disappeared into the ether.