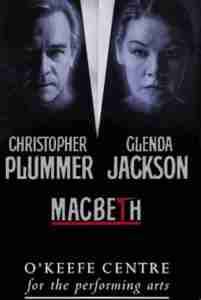 Engaged by Melinda Howard & Kevmar Productions as Production Supervisor for the Toronto segment of the Broadway-bound production of Macbeth by William Shakespeare from March 8 to March 20th, 1988 for 16 performances at the O’Keefe Centre, Toronto prior to a Boston & New Haven tour as part of its transfer to the Mark Hellinger Theater on Broadway for a 12-week run from Apr 21, 1988 to Jun 26, 1988.

As Production Supervisor, my job was largely focussed on making the new physical production fill out the cavernous stage of the O’Keefe, using the bulk of the set from Philly (with refurb) and some new builds with the local IA shop to prepare to tour on a pink card back across the border onward to Boston, and ultimately to downscale again for Broadway. The greatest thing to come from this experience was meeting the brilliant Martin Onrot, head of the O’Keefe Centre, who would later hire me a few times to help with future troubled shows. 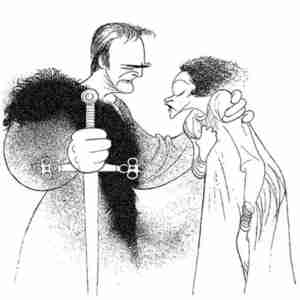 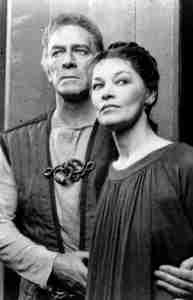 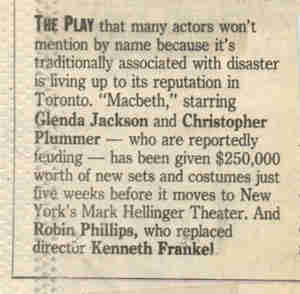 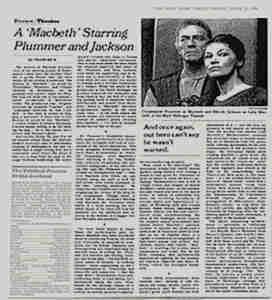 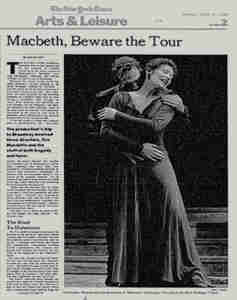 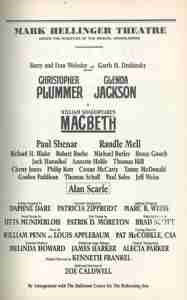 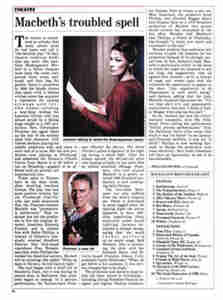 Some interesting backstory
to the exhausting metamorphosis
curse of Macbeth…

When three witches deliver some surprising prophecies, Macbeth hatches a plan to murder the king and claim the throne for himself. Provoked by his wife and preoccupied with greed, Macbeth begins his tragic descent into madness.

Initial concepts of witches from outer space and men in kilts, all set in the future, eradicated the idea of the first director, Ken Russell, who quit the project before rehearsals began.

Kenneth Frankel, the Assistant Artistic Director of the Long Wharf Theater in New Haven was brought onboard as Director.

Original designer Tony Walton wanted a forest like romantic look in an open-spaced gargoyle environment with massive difficult to negotiate under stage lighting conditions jagged staircase, until Ms. Jackson nixed that by the end of the first tryout in Stamford, while Mr. Plummer twisted his knee and tore ligaments on a fake grassy rubberized floor covering.  Half a dozen other cast members similarly had ankle twists and torn groin ligaments from the same floor covering.  The Stamford run was sold out and got mixed reviews.  The 2nd tryout leg opened on January 26 in Baltimore for a 3 week run.

On its opening day in Baltimore, Kenneth Frankel found out that co-producer Garth Drabinsky (at the Cineplex Odeon) was bringing on Robin Phillips, the former artistic director of the Stratford Festival.

After the Baltimore opening at the Morris Mechanic Theatre, the producers met with the original creative team, along with Robin Phillips, where it was agreed for a new set, new lighting, new costumes would be developed with Robin Phillips as new Director.  Designer Daphne Dare (who has a history with Robin Phillips) was brought to Baltimore from the UK with a new set based on 3 gray walls, abstract pillars and steps.

The Morris Mechanic Theatre run in Baltimore was followed by a 2 week run at the Benedum Center for the Performing Arts in Pittsburgh (where I came on board) — the first week Macbeth I was performed, the second week, with only 2 weeks rehearsal,  the massively different Macbeth II was performed, to which local critics raved.

By this time, Toronto O’Keefe Centre had amassed a box office record of $1 million in advance sales, often involving two-hour lineups, around a quarter of a million dollars in new physical staging of sets and costumes were implemented from the Pittsburgh run with refurbishment in Ontario.  The pressure was on to deliver the goods.

Sadly, by the time we opened Macbeth II in Toronto, the local Canadian critics were a little harsh, particularly on Canadian Christopher Plummer, seemingly due to a weird nationalistic pride in the Canadian press. During the run in Toronto, Christopher Plummer accidentally has a front tooth knocked out onstage by a fellow actor Thomas Schall (one of Macbeth’s hired murderers) during a scene change.

At the black tie opening night in Toronto, Robin Phillips was nowhere to be seen.  He had quit the project that day, citing contractual breaches.

Robin Phillips later came back to Boston to help with rehearsals at the Quality Inn Empire Ballroom (the ballroom was adjacent to construction of a restaurant with jackhammers and drilling each day).

However, making it even more interesting, now Barry and Fran Weissler had engaged Zoe Caldwell to take over as Director in Boston at the Colonial Theatre, where it had also sold out its run from March 22 to April 3.  As the company moved onto the Shubert Theatre in New Haven, which was also a complete sell out, April 5-10, they essentially re-blocked the show again, before a single week of previews in New York.

Opening night on Broadway at the Mark Hellinger Theater, with a very exhausted company, was my birthday on April 21, 1988.

Summary by the numbers

3 productions of 1 show, 4 directors, 3 Macduffs, 5 Banquos, 6 cast changes, 2 set designers, 2 lighting designers, 26 bouts of flu amongst 58 touring company members, plus assorted injuries — ‘the curse of Macbeth‘ was real, and has haunted the play since it was written in 1606.