Xiamen (厦门) (also called Amoy) and its surrounding countryside is known for its scenery and tree-lined beaches.  It is an island city with a rich and dramatic history, replete with pirates, rebel leaders, and European merchants. Now linked to mainland Fujian by a causeway, Xiamen retains a strong international flavor.

Xiamen has a long history as a port city, and became a center of British trade in the 19th century. Their foreign settlements, later taken over by Japanese invaders at the start of World War II.

Xiamen was founded in 1394 at the beginning of the Ming dynasty as a center of defense against coastal pirates. In the mid-17th century, Xiamen became a stronghold of Zheng Chenggong, known in the West as Koxinga, a Ming loyalist who held out against the Manchu invaders until being driven to Taiwan.

After the Opium Wars Xiamen became one of the first treaty ports to be opened to foreign trade and settlement following the Treaty of Nanjing in 1842.

Xiamen is headquarters of the 31st Group Army of the People’s Liberation Army, one of the 3 group armies under the Nanjing Military Region, which is responsible for the defense of the eastern China, including any military action in the Taiwan Strait.

The Jinmen Islands, still controlled by the Republic of China from Taiwan, lies only 6 kilometers off Xiamen.

Xiamen was designated one of the four Special Economic Zones (SEZs) in the early 1980’s.

You can enjoy Xiamen’s unique scenery not only in the day but also in the night. Take a breather and walk beside Yuandang Lake in the evening and you can see how Xiamen transforms into a different setting: lighted artistic sculptures, scent of the sea, and romantic lovers by the lake. Enjoy your stroll and notice that some buildings even have a light show at night, simple laser/light shows that attract attention, which is some form of an advertisement mostly done by newly opened commercial buildings and some residential complexes to draw attention to their business. 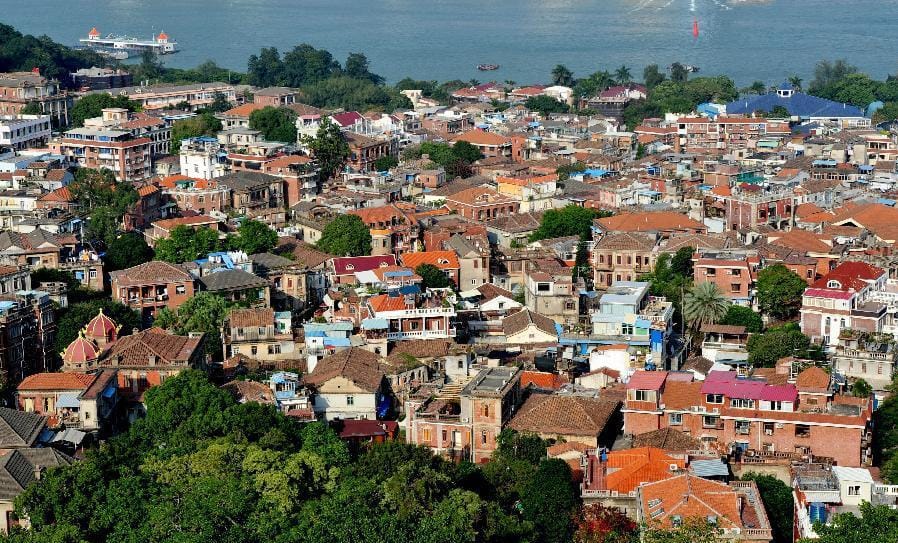 A 5-10 minute ferry ride from Xiamen, the 2 square km Gulangyu Island aka “Piano Island”, was the center for foreign communities who settled here after 1842.  Renowned for its beaches and winding lanes, many built Western-style mansions, churches, warehouses, and government buildings where more than 1000 historical buildings with different styles still survive today .

Gulangyu Island is known as the piano island because people here love the piano. As early as 1913, students in schools run by foreigners started learning the piano. The enthusiasm for music later spread to more people on the island. Many piano families have since then come into being and produced accomplished musicians.

No road vehicles are allowed here, bicycles are the only means of transportation. In recent years, some battery-powered sightseeing vehicles commute from the beach to the port.

What to see on the island: