The formative years of my childhood in Washington D.C. in the early 1970’s while living in suburban McLean, Virginia. It was during this stay in Washington, much to my childish know-it-all chagrin, I saw my first theatrical show. 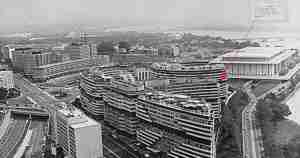 When we arrived in Washington, while awaiting the Australian Embassy residence to be built, we lived in the presidential suite of the Watergate Hotel, during the famous Watergate scandal.  This was the first time I saw snow, the first time eating boxed cereal, the first time with color TV, my first use of a remote control, all the time when I was coming of age.

I vividly remember standing on our Watergate Hotel balcony and looking down at the ice skaters on the Potomac River. I was in awe. To my left, I could see the façade of the Kennedy Centre, directly across the river in front of me, was the Theodore Roosevelt memorial. I could see Arlington Cemetery and the Iwo Jima Memorial. I didn’t know it at the time, but directly behind the Watergate was the Old Naval Observatory and the district of Foggy Bottom, the epicenter of all spy activity.

Coming from Australia, Washington D.C. was remarkable. The distinct seasons of winter, spring, summer and fall, the extremely modern technology (at the time). The department stores of Bells, Best (my favorite) and Sears were places of wonderment and excitement to me. The massive shopping centres such as Tysons Corner in nearby Virginia, housing every style of restaurant a little boy could imagine. 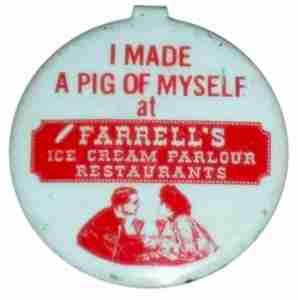 My favorite was Farrell’s Ice Cream Parlor at Tysons Corner where the menu was printed as a tabloid-style newspaper. It featured burgers and dozens of sundaes. Specialty orders were delivered with great fanfare by groups of waiters carrying the order replete with plastic zoo animals attached to the food, paraded wildly around the restaurant while singing and to the sound of ambulance sirens.

My life was good. As the son of an active and strict army father and a retired air force mummy, I was lucky to get special treatment. I was the precocious, excitable youngest child living alone with my parents in Washington D.C. during my father’s posting.

My coming of age in Washington DC

The years in Washington were definitely my formative years, and the ones that likely set my life’s trajectory.

Of course, while evolving into a teenager, at this stage I was already gay, but I had no idea about that, these things were not spoken about nor were given any media attention.

I remember when I was about 10 or 11 years old looking at the black-and-white advertisements in the back of my older brothers seedy girlie magazines where they offered mail order sales, along with sketches and short descriptions of dildo’s, penis pumps and other sexual toys to assist their sex lives, and my being somewhat imaginative laying under the covers of my bed reading these with a flashlight.

By daytime I focused on typical school things. I absolutely hated school, particularly mathematics, physical education and science. My math’s teacher at Chesterbrook Elementary School was from the state of Georgia, and to this day I speak and count numbers with a southern USA drawl.

Just like I thought all boys my age did, after school and homework, I would play with my G.I. Joe or Evil Knievel doll secretly in our backyard or spend time with Peter, our neighbor, and son of the Danish ambassador, playing army games in a nearby forest, making forts, climbing trees, or looking at page after page of boys & male models in underwear ads in the Sears Roebuck and J.C. Penny catalogs.

However, I was immensely proud of being a school bus monitor. Perhaps it was because I was the only one allowed to wear a bright orange sash and shiny silver badge. As the son of a high-ranking foreign diplomat, I took great pleasure in bossing around the bigger USA boys on the busses to and from the nightmarish schools.

To be 100% honest, I also enjoyed looking up the short sleeves of the older boys fascinated by (perhaps jealous of) their armpit hair. As a school bus monitor, I was the only boy allowed to stand while the bus moved, so this gave me a terrific way to find the best viewing angles.

One day my mummy announced it would be a good idea to take me to the Kennedy Center to watch a musical show. At the time I thought this was a horrifically boring idea but of course I had no choice… Off we went. Halfway through the Jerry Herman overture of Hello, Dolly! I was enthralled by the uplifting songs, movement, costumes and scenery — it was a revolutionary, fantastical and wonderland experience for me. By the end of the show, I wanted more. It was at this moment that the magic and excitement of live theatre determined my life’s path.