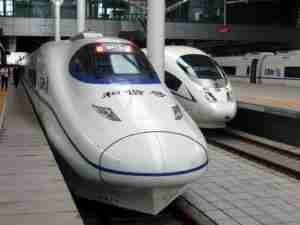 Train travel is the major mode of long-distance transportation for the Chinese themselves. China is in the process of building a network of high-speed trains, I only recommend these..  They are called CRH and train numbers have a “G”, “C” or “D” prefix

Business class seats are the most luxurious and expensive seats on some, but not all of the high speed trains. They are like first class on an airplane. The sofa-like leather seat can be adjusted flat and are equipped with complete facilities. A mini LED TV set with many movies is folded in the left arm of each seat, and there is a power outlet under each seat. A tray table is hidden in the armrest. Some trains also offer free snacks, drinks, disposable slippers, back cushions and blankets. On a few high speed trains, there is a sightseeing area in the business class carriage or VIP carriage, which is in the front or the rear of a train, just next to the operation cab and separated from the common business class carriage by a toilet, a locker room and a bar. The sightseeing area usually has only 2 rows and oversized windows, and is generally a “silent” area.

Foreigners must present ID (passport) in order to purchase a ticket. The passport name is printed onto the ticket and each individual is required to be present, with passport, to pick-up their ticket.  Do not expect English-speaking staff at station desks, even in big cities. It may be better to get tickets in advance through an approved agent who sells tickets with a nominal markup. The convenience of avoiding a trip to the train station and waiting in the queue is well worth the small increase in cost.

On most CRH trains pre-recorded announcements are made in Chinese and sometimes English. You’ll need your ticket to enter and exit the station – usually there will be an inspection at the departure hall entrance or the boarding gate and another at the exit gate. Once in the departure hall, follow the digital indicator boards to find the right boarding gate (they are in Chinese but will display the train service number which is printed at the top of your ticket). Approx 10 minutes before boarding your train and platform will be announced and the gate will be opened, just follow the crowd to the platform – at larger stations the train will already be waiting, in smaller stations look for your car number written on the platform edge – make sure you’re waiting in the right place because often the train will only stop for a couple of minutes.