In 1996, as part of the lead-up to a key project for the Broadway musical TITANIC in 1997, I spent 6 months researching and compiling the world’s largest (at the time) historical archive and library of RMS Titanic information online from multiple sources.  Each character in the musical was mapped to the original real life person to assist character development.

I compiled the 1st comprehensive database of all passenger detail (from immigration records & passenger manifests) and ships crew (from White Star Line manifests and newspaper archives) along with transcribing the cargo hold provisions & food orders. I curated news articles sources and images from various newspapers & global museums as background and marketing support.

My database and scanned image collection was so comprehensive (about 2,200 pages) that the forthcoming Titanic film (directed by James Cameron) 20th Century Fox producers asked permission to use.  Since then, hundreds of other places online have copied my data.  Here below is just a tad of the highlights of this information from my archives. 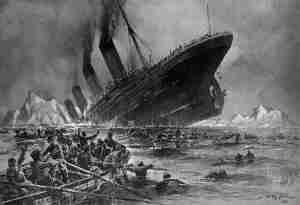 The White Star liner Titanic, the largest ship ever built at the time, bound for New York on her maiden voyage, collided with an iceberg 400 miles South-East of Newfoundland, on Sunday April 14th at 11.40 pm at Lat. 41° 46′ N. and Long. 50° 14′ W. (between Sable Island and Cape Race), and then sank in water 2 miles deep 2½ hours later.

According to the U.S. committee investigating the sinking, 1,517 lives were lost, and its British counterpart determined that 1,503 died (815 passengers & 688 crew) while 705 people were rescued by RMS Carpathia.  68% of people on board (passengers and crew) were lost in the disaster. 80% were male passengers who perished.

Did you know?
Passengers traveling 1st class on RMS Titanic were roughly 44% more likely to survive than other passengers.

For 1st class passengers there were 69 suites and 2 special ‘Parlor’ suites. In all there were 350 1st class rooms. 100 of which were single-berth rooms. There was accommodation for over 750 1st class passengers, over 550 2nd class, and over 1100 3rd class. A 1st class ticket aboard the ship cost passengers $2,560 at the time, the modern equivalent of which would exceed $61,000. What did these expensive cabins include? Two bedrooms, a sitting room, two wardrobe rooms, and a bathroom.

Amongst the vessel’s special features were private promenade-decks, a gymnasium, a Turkish bath, a swimming pool, and a squash-racquets court, with a spectators’ gallery.  The vessel cost upward of $5 million, and her fittings and furnishings nearly $3 million more in 1912 (that’s about $180 million today), she was insured for $3,7 million, of which her owners carried $750,000. The total money loss of the disaster was estimated at not less than $27 million in 1912 dollars.