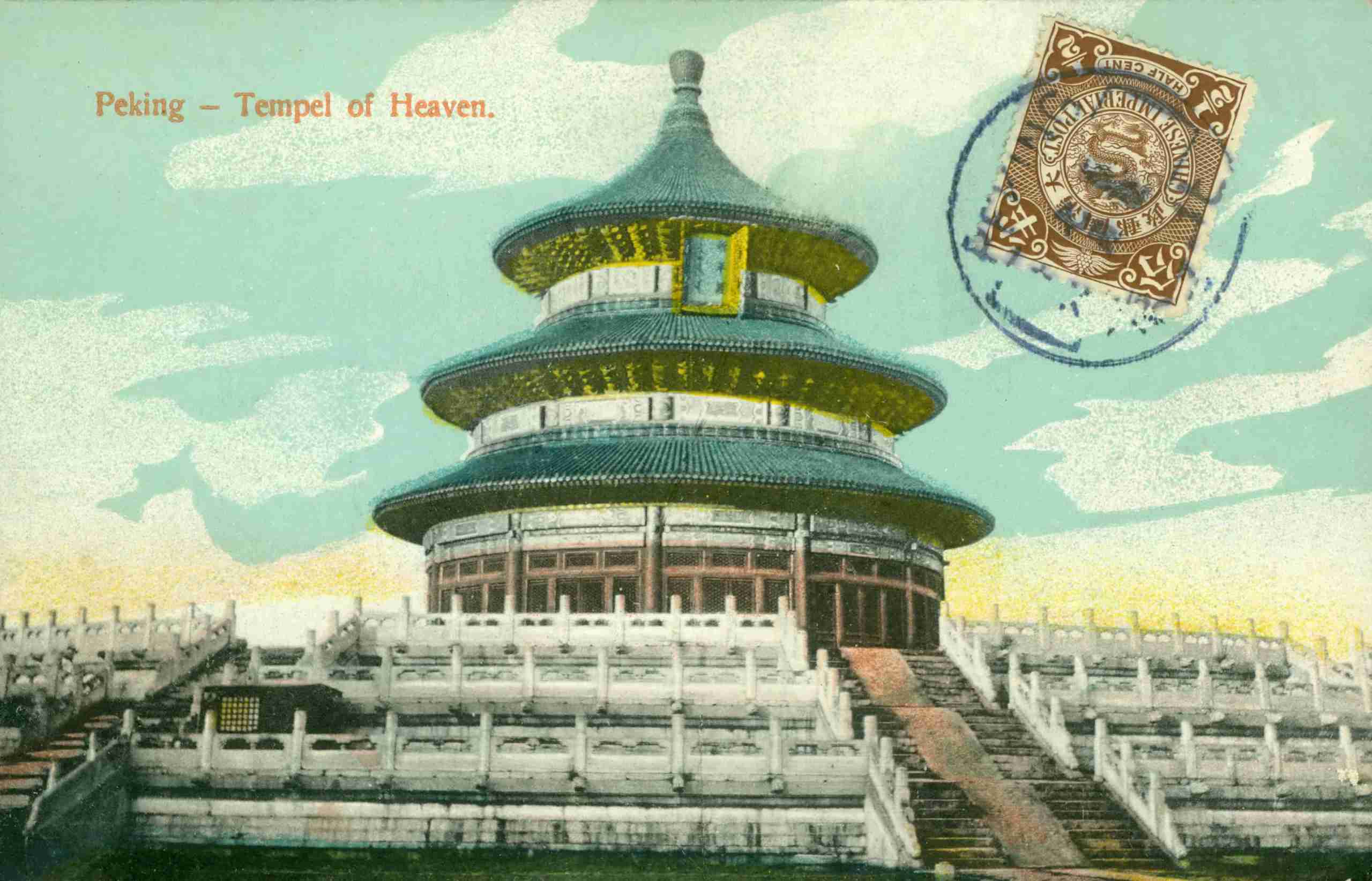 The Temple of Heaven (天壇 Tiāntán) is an imperial complex of religious buildings situated in the southeastern part of central Beijing. The complex was visited by the Emperors of the Ming and Qing dynasties for annual ceremonies of prayer to Heaven for good harvest. The Temple of Heaven has been regarded as a Taoist temple. 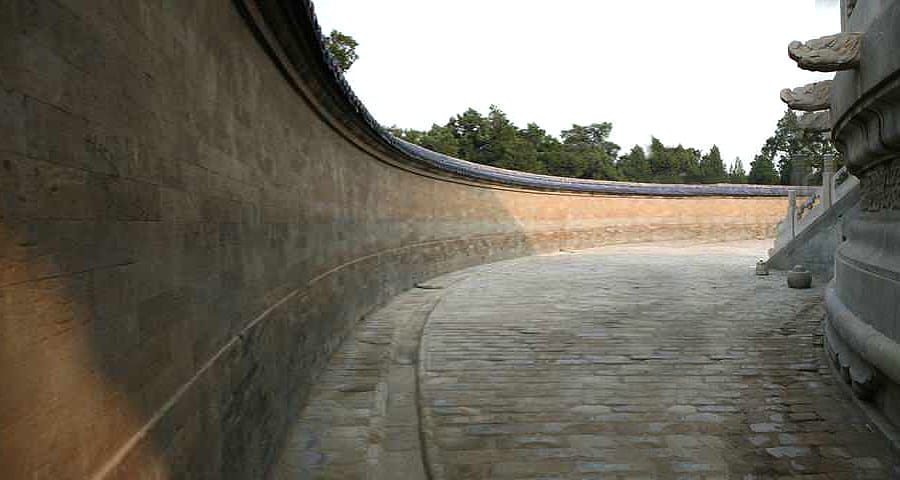 The Whispering Wall (or Echo Wall) is the wall surrounding the circular courtyard. If you whisper close to the wall the sound will travel around the wall back to you.  The eaves of the wall and the hermetically laid bricks make wireless communication possible between two people who speak in normal voices.  To be the most effective, the courtyard cannot be too noisy and both people must face north.  So it is better to stand by the wall at the back of the two side chambers. The entrance of the courtyard prevents the voices from being heard by others.  Supposedly the Emperor would use this method to secretly confer with Inner Court members. 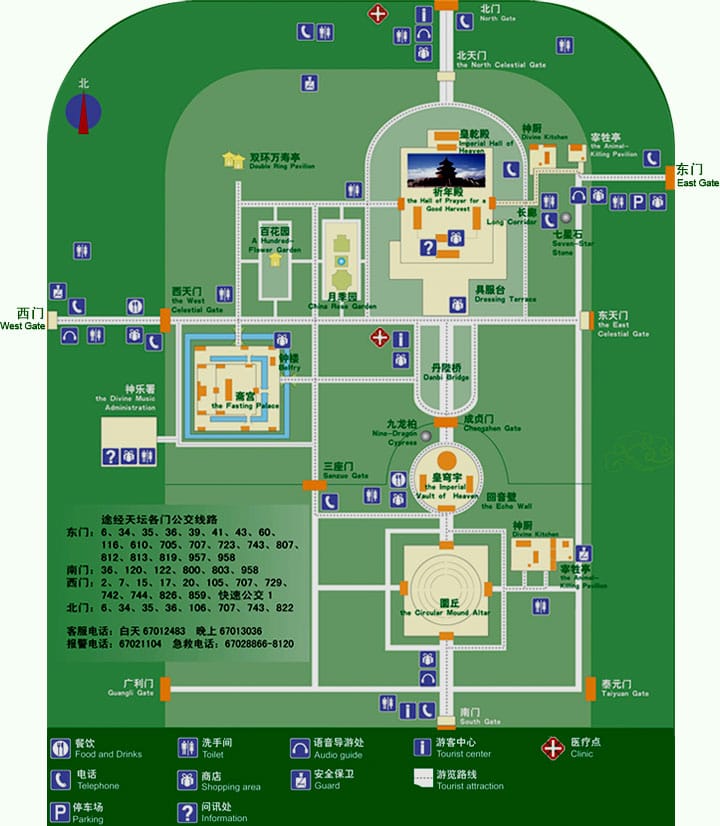 5 architecture groups in the Temple of Heaven are given respective features while the Hall of Prayer for Good Harvests is the major focus.   The temple is divided by inner altar and outer altars. The northern part of the temple is circular while the southern part is square, which reflect the ancient Chinese belief that Heaven is round and Earth is square.

Located in the northern part of the Temple of Heaven is the Altar of Prayer for Good Harvests, where the emperors sacrificed animals and burned incense sticks to pray for good weather for the crops; while in the southern part is the Circular Mound Altar (also known as the Altar for Worshiping Heaven or the Sacrificial Altar) where emperors held ceremonies for worshipping the Heaven. Two clusters of worshipping buildings are connected by the Red Stairway Bridge. Additionally, in the temple are the Hall of Abstinence where emperors held fasts before the ceremony and the Divine Music Hall, an imperial organization in charge of performing during the ceremonies.

Sacrifices to Heaven were arranged in winter every year. On the 15th day of the first lunar month, on the winter solstice (22nd solar term), and some time during the first month of summer, the emperor would go to the Temple of Heaven to worship Heaven, to pray for good harvests and rainfall, and to offer sacrifices to the ancestors, to the gods of the sun, the moon and the stars, and to the gods of the clouds, wind, rain, and thunder and lightning.

Sacrificial ceremonies followed complex procedures. First, the whole altar area had to be renewed from end to end, including the roads to be taken by the emperor. Second, the sacrifices, including oxen, goats, piglets, fruits, etc., had to be properly prepared and displayed in front of seven groups of spirit tablets. In addition, 700-odd items of utensils and other sacrificial facilities, as well as more than 60 musical instruments of 16 kinds, including bells and chimes, had to be placed in order. Third, one day before the formal ceremony, the emperor was obliged to burn joss sticks in the Imperial Vault of Heaven, to check the spirit tablets in the Circular Mound Altar, to examine the sacrifices in the sacred kitchen, and to begin fasting in the Palace of Abstinence.

The ceremony began before sunrise. The emperor proceeded from the Palace of Abstinence, amid the sound of bells, to the Circular Mound Altar, when drums and other instruments took the place of the bells. At the formal opening of the sacrificial ceremony, oxen were roasted, lanterns were raised, and a mystical aura would soon cloak the scene. The whole ceremony was divided into nine procedures — from receiving the Heavenly King to seeing Him off. Different music would accompany different parts of the ceremony.

Every sacrificial ceremony was a grand occasion to solicit welfare for the country, as well as respect and awe from the people towards the emperor, who was sanctified as the Son of Heaven (Tianzi) throughout ages. 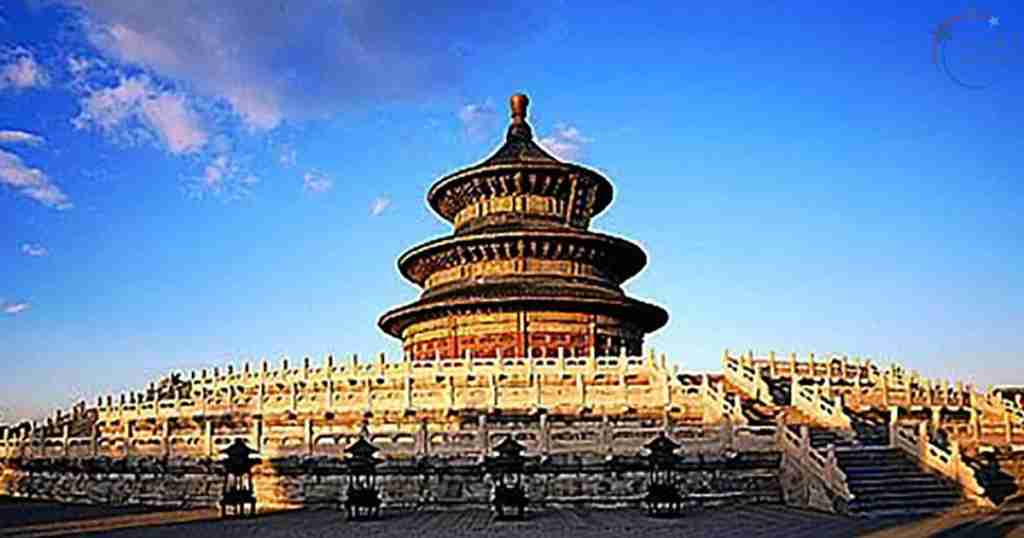