The Crazy History of the Teddy Bear

Everyone agrees that the “Teddy Bear” was invented in 1902, and is named after Theodore ‘Teddy’ Roosevelt, then President of the United States, however a dispute between America and Germany has continued for a century as to who made the first Teddy Bear…

highlights of my 🧸 Collection

Origin of the “jointed bear”

The story begins in Germany, in late October 1902, where Richard Steiff, a toy designer working for the family firm in Giengen, went to a touring American circus in search of an idea for a popular new toy. Among the animals he saw there was a troupe of performing bears, and they sparked off the original idea. The following day, he put his thoughts down on paper for Margarete Steiff, his aunt, who had founded the firm in 1880.

Richard saw an opportunity to make a bear toy, standing upright, and jointed in a similar way to dolls. There had been bear toys before, of course – often made from real fur, but these had all been copies of real bears on all fours. Richard’s bear would be able to walk upright. Richard set to work on visiting the Nill’scher Zoo in Stuttgart to sketch the bears and come up with some proper designs for a jointed bear codenamed Steiff Bär 55 PB (“Bär” is German for “bear”, 55 = the bear’s height in centimetres; P = Plusch, plush; and B = beweglich, moveable limbs).

Origin of the “Teddy” bear

Meanwhile, several thousand miles away, President Roosevelt, visiting Mississippi to settle a border dispute, decided to go out hunting on November 14, 1902 near the town of Smedes. After several hours, he still hadn’t bagged anything, when one of his aides discovered a lost bear cub wandering through the woods. Catching it, the aide tied it to a tree, and brought the President to it. To Roosevelt’s eternal credit, he couldn’t bring himself to shoot the defenseless cub, and ordered it to be set free by declaring, “Spare the bear! I will not shoot a tethered animal.”

The press pack following Roosevelt’s visit heard about the story, and it inspired cartoonist Clifford K. Berryman to draw a cartoon of the incident, entitled ‘Drawing the Line in Mississippi’. This cartoon was printed in The Washington Post, and triggered a moment of inspiration for Brooklyn candy store owner Morris Michtom, a Russian Jewish immigrant and his wife Rose. 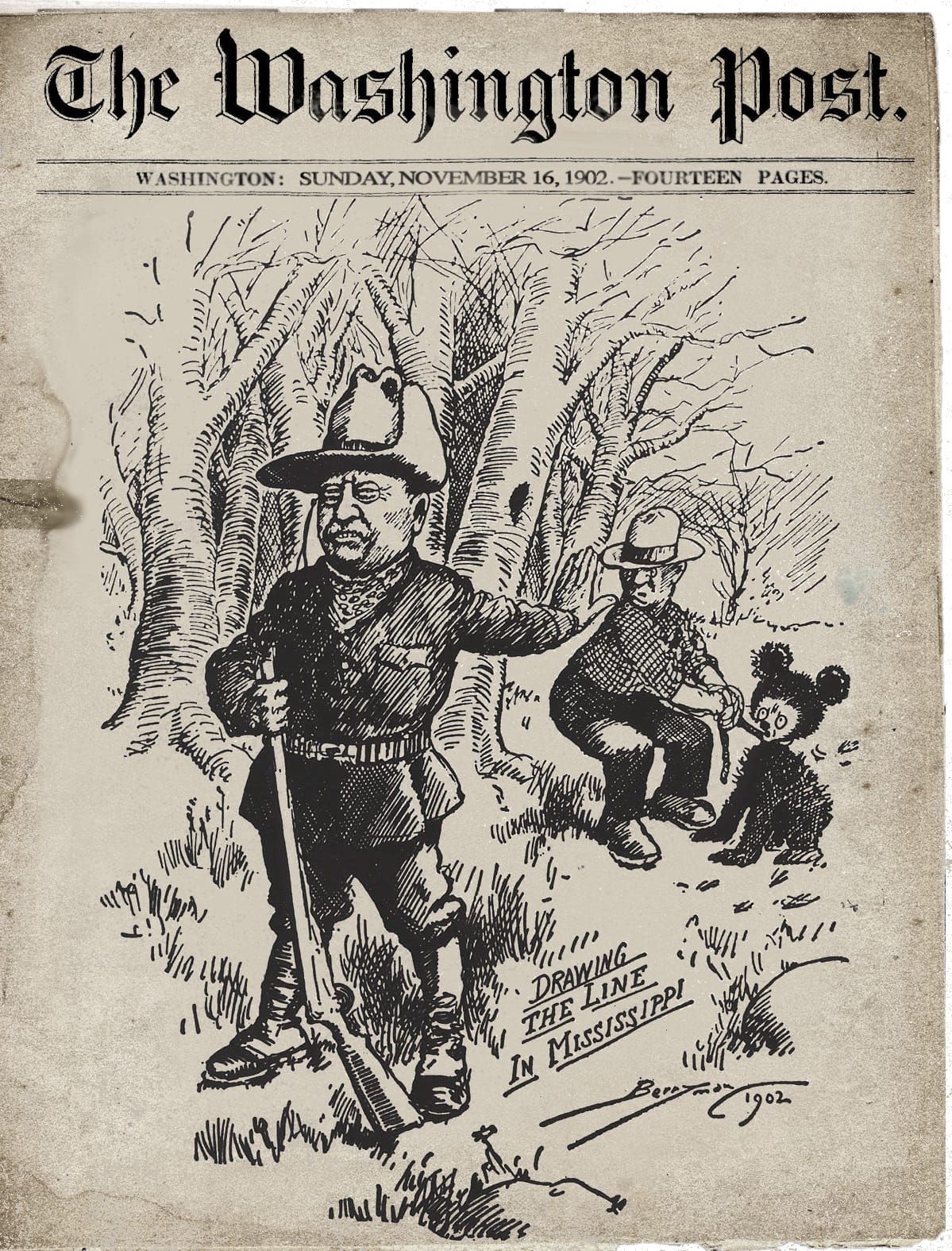 Using Berryman’s cartoon as a guide, he quickly worked out a pattern, and, his wife, Rose cut and stuffed a piece of plush velvet into the shape of a bear, sewed on shoe button eyes, creating a little jointed bear cub. On February 15th 1903, Morris put into his shop window at 404 Tompkins Avenue in Bedford-Stuyvesant, Brooklyn with a copy of t