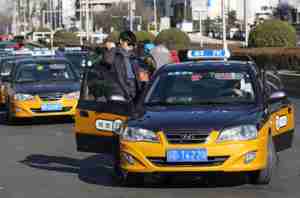 Taxis (出租车) are are available at all hours yet sometimes difficult to get in major cities due to the preferred DiDi service (see below).  Starting fares differ from each city and may be as cheap as RMB 6 in a small city and RMB 17 in Shanghai for flag fall.  Average total taxi cost in downtown Shanghai is usually less than RMB 25.

Your driver will not speak English. Keep the name of your hotel or destination written down in Chinese characters.  A mobile phone text message, brochure, business card or receipt will also work well.  Then you can easily show it to a driver.

Be warned, flagging a taxi in the street in Beijing and Shanghai these days is difficult – have patience. Most use various Chinese only smartphone apps to be pre-booked. While technically illegal for them to do this, they keep their light on to reduce police detection, and will not stop if booked.

Best to find a high trafficked location like a hotel, restaurant or shopping centre and look for taxi’s dropping off customers — be warned, you will be fighting with many Chinese also trying to grab the same taxi — stand your ground, and get to the taxi door first, while the existing customers pays and gets out.  This is particularly a problem at peak hours (8am-10am; 4pm-8pm and 11pm when subways close).

Taxis are metered, so just get in the taxi and pay the fare when you get out. The machine will also print out receipts automatically for you if you need it.   Get your receipt (in case you want to make a complaint later, track something you forgot in the taxi or for reimbursement purposes) by saying “FaPiao” or gesturing at the meter and making a writing motion.

You can pay by WeChat, Alipay or cash.

Taxi’s can hold a MAXIMUM of 3 (small) people in the back seat, and one in the front for a maximum of 4 passengers.  Taxi trunks are often tiny, and usually half filled with propane or natural gas tanks, so do not expect you can get a suitcase into a trunk.

You must enter the taxi on the passenger side ONLY.  The rear driver door is usually disabled for safety.

Tipping is not very popular in taxis and is officially discouraged.  However, as a foreigner, you will be expected to leave coins or change or round up in taxis if paying by cash.

While it briefly worked in 2015/2016, UBER has now been sold in China to it’s Chinese competitor (DiDi), and a Chinese only UBER APP was created.  Later in 2017, Didi launched an English service within its app that only works with Chinese mobile phone number, being used within China, with an operating system defaulting as English.   The service allows you too book regular taxi’s, shared private cars, or premiere cars in English using your phones GPS.  You can use Didi from within WeChat — Me -> Wallet -> Order Taxi, however the English service only appears in the standalone Didi App.

Be warned, even with English ordering service, the driver may still call your mobile phone and typically only speak Chinese, so have a Chinese speaker next to you when ordering.  To minimize this, I send the driver a message in WeChat in Chinese the moment I book, to say I will am at the precise GPS location and will wait for him — 9 times out of 10, this works and they do not call me.

NOTE: Vehicles with government or military plates (typically identified with a red WJ on their license plate) are not subject to the Road Traffic Safety Law of the People’s Republic of China (中华人民共和国道路交通安全法); they may run red lights, drive in the wrong direction, drive on sidewalks to cut through traffic, or weave in and out of traffic. Communist party officials and People’s Liberation Army members are also exempt from paying road tolls and adhering to parking regulations.