“I was a male stripper in a go-go bar“

OK we all have a past and did something that we are not altogether proud of.  Here’s my stripper story…

In 1984, in my “big hair” and alcohol / substance infused days, I lost a bet with my peers and agreed to be a male stripper — I did this for a (very) short time in Brisbane, mainly as a lark, at the sleazy local burlesque theatre called World By Night next to the Orient Hotel at the juncture of Ann and Queen Streets in the Fortitude Valley (it was later mysteriously burned down) — the show was called “Pisstols”.

We think this was the first ever male strip show in Brisbane.

This was during the time when the Queensland government banned depictions of nudity. So, a live strip show to reveal nudity was definitely an arrestable offence.

The work around, to become compliant with the law, and not be fully nude, was to wear what we called a “cock sock”, almost like a skintight single foot sock that was carefully wrapping penis and genitals, yet still terrifyingly revealed girth, length and other details. 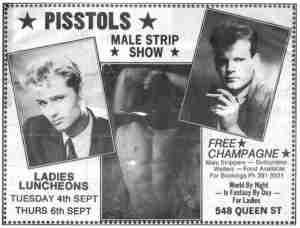 I performed two segments in the show.

First, massively over-dressed in a cape and leather jacket, white dickie front & bow tie, faux leather top hat, white gloves, monocle, cane, quick rip-off pants with Velcro down the side seams and a “cock sock”, I performed my rather desperately camp routine to Irving Berlin’s “Putting on the Ritz” (1983 version by Taco). Somewhat like a scene from the musical GYPSY, I spent most of the act strutting the stage with the cane and glass of champagne and spent 2 minutes removing my white gloves, finger by finger.

The second was my beginning the segment dressed in leather, head to toe, in a designer jacket, shirtless under it, leather chaps, also with Velcro quick release, and leather underwear, and under that, a pleather cock sock. This was performed to “Relax” (1983 version by Frankie Goes to Hollywood). While “Relax” was interpreted as an upbeat celebration of gay sex, the female audiences never connected the dots.

Both segments of my show ended in total nudity (except for the cock sock) with a back lit lighting flash and (fast) blackout.  The Full Monty ahead of it’s time.

At least the ladies (and the press reviewer) liked it for the couple of weeks I did it. 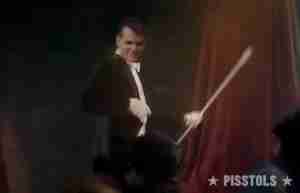 Putting on the Ritz
by Irving Berlin 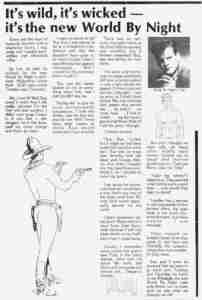 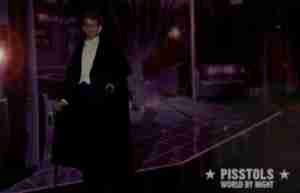