It’s nearly impossible for consumers these days to determine value for money and quality of show prior to seeing it, since it’s become easy to market a show these days by merely licensing the original Broadway or West End productions logo with their performance license, and to include the pedigree of the original production in the marketing of the tour.  For example, often in China we see “Tony Award winning musical” branded on marketing for non-union shows.  While it may be true that the original production by the same name (and logo) won a Tony Award, it has no relation whatsoever to the the musical production currently touring.  Indeed, I’ve seen many a show in China at major theatres labelled as Broadway tours that were actually on the Actors Equity do not work list (“black list”).

In general terms, one single Broadway or West End musical production may spin off, over time into multiple tours — typically starting with a high quality tour in North America or the UK while the show is playing on Broadway or in the West End, or immediately after it closes.  Once this tour has done it’s rounds, often a cheaper tour is developed to play slightly smaller theatres/cities, using a scaled down set and company.  After this tour has it’s done it’s rounds, the show is often put out for licensing, allowing 3rd parties to create a version of the show, licensing the original logo, and touring to even smaller markets and international cities using a much smaller set and company.  This process repeats for as long as the market can sustain.

USA based professional union musicals are classified by the producers and union associations based on the productions weekly base guarantee (the fee paid by the local presenter to the shows producer).  For example, and in generalized simplistic terms, from best to worst:

Internationally, it gets murkier, generally West End of London is the pinnacle of quality, followed by a 1st class licensed “sit down” production in a global city (such as Amsterdam, Toronto, Hamburg, Tokyo or Melbourne).  Thereafter, usually the 1st class tours are next best quality — for example, British, European or Australian touring productions.  Thereafter, the 2nd class tours are next best, using largely companies of actors and crew from places like South Africa, Eastern Europe or Mexico — often non-union, yet semi-professional.  What follows, and often the lowest quality productions are those utilizing non-union and often precariously paid companies of actors and staff.

SOME presenters in China, capitalize on this confusion and mislead the general public by marketing a low quality non-union show as if it was the original Broadway or West End production which has never been the case.  This is doing significant damage to the Broadway brand in China, and is dramatically hurting the audience development of the market.  I plead with Chinese presenters to be honest in the marketing in future.  However, I predict this issue will get worse as China places lower cost, regardless of quality as a priority, and as more theatres open, with more shows competing with each other. 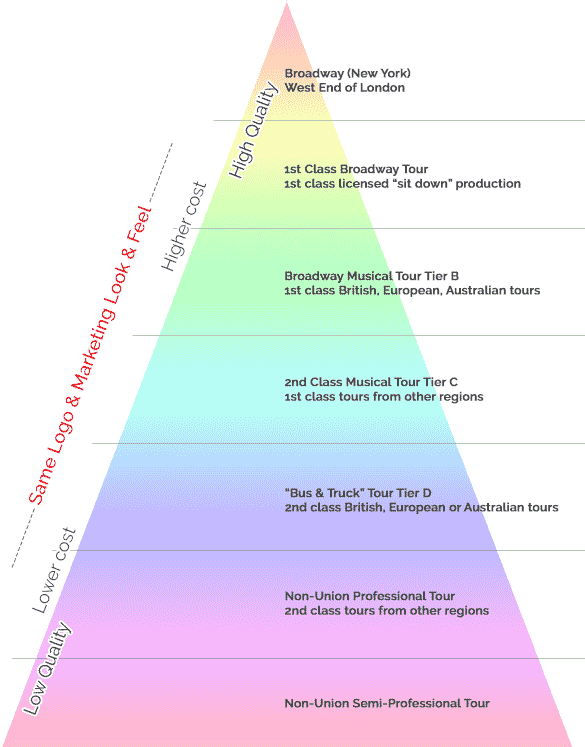 Unfortunately, MOST of the musicals seen in China too date fall into the blue/purple/pink zone.  (and a couple at the very, very bottom of the chart)