The Shanghai Culture Plaza is a space in Luwan district, within the former French Concession of Shanghai. The site has a remarkably turbulent history, that despite its sometimes uneasy history, is important to remember.

The original Canidrome built in 1928 included a hotel with the largest ballroom of the time, plus a stadium structure intended for greyhound dog racing.  It quickly became a multi-purpose entertainment space for the Shanghai elite pre-war.  During the war, it was converted to Japanese military horse stables.  After the war, it became a place for political rallies after the founding of the People’s Republic of China and a mass execution facility.

Then, after a fire, it was rebuilt in 1972 and once again it became a theatre and exhibition space, a stock exchange and finally a huge flower market before it was demolished in 2006.

Today, the theatre covers the area like a white wave flowing over its fascinating history.

The awarding of the Expo in Shanghai caused the Communist Party to think about the planning of Shanghai.  Thanks to well politically connected Fang QuanLin the day before my birthday in April 2005, I was involved in an interesting meeting with the local cultural and propaganda authority in determining the principle purpose and ideal size for a new theatre to ultimately establish spec out for future RFP for architecture firms.

Fang QuanLin was an ex political and ex-military leader, who also had aspirations to be just like Leo Bloom in The Producers wanting to produce long lines of showgirls and fill his pockets with lots of cash in his retirement. He had created a local Shanghai cultural development company called Shanghai 999 to position himself, and became a consultant briefly during my last Nederlander days, but I digress….

The meeting was held in large room with a long rectangular table, with the Shanghai Propaganda head sitting in the centre, next to the Shanghai Cultural head.  At one end of the table were the leaders of the Shanghai Grand Theatre (at the time, the largest and most prominent theatre) and at the opposite end was my friend Wang Jingbo of the Majestic Theatre (a medium size Art Deco treasure).  I was seated directly opposite the Shanghai government leaders, with my assistant Wang Chao to my left and Fang QuanLin to my right.  Scattered between us all were the managers of most of the other Shanghai theatre’s, typically small size.  The symbolism of the seating was not lost on me — it was like a boxing ring.

To my far right, the leaders of the Grand Theatre wanted the new facility to be tiny so as not to compete with their venue and were pushing for a tiny local drama theatre of 500 to 999 seats, while to my far left, the smaller theatres in Shanghai, seemingly taking their lead from Wang Jingbo of The Majestic, wanted it to be massive, in the 3,000+ capacity range to focus on grand spectacle, opera and ballet to stick it to the seemingly uppity management of the Grand Theatre of the time. I was the lone voice in the room that recommended it be in the middle of the 2 opposing voices, at 2,000 seats, with a focus on international quality productions with ability to house musical theatre shows.

What made this funny, at the beginning of a very long 2 or 3 hour, and rather heated meeting, where Wang Chao was having difficulty keeping up with translating the yelling between the small and large theatres, I had written down “2000 seats” on a napkin, folded it, and placed it on the centre of the table, told Wang Chao to only give me highlights, and sat back, smoked a few cigarettes, sipped a terrible coffee or 2 and waited… and waited…

Towards the very end of the marathon meeting, the Shanghai Propaganda Minister asked me for my thoughts.  The room fell silent, all eyes on me, and I simply pointed at the folded napkin (how theatrical!).  The Minister reached for the napkin and revealed what I had recommended 2-3 hours before.

The government approved the plans almost immediately to issue the instruction for the cultural space to focus on musical theatre with 2,000 seats.  The concept for the park began in 2003 and after a series of international design competitions were held, won by Beyer Blinder Belle & Balmori Associates whose theatre and refinement to the park was designed in late 2005, and was completed in 2011 with a 2011 seat musical theatre venue, over 3 levels, in 65,000 sqM of largely underground space. 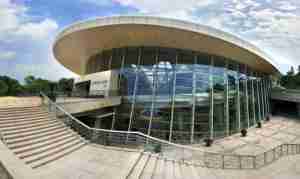 The Shanghai Culture Square Theatre is the largest & deepest underground theatre in the world. The 65,000-square-meter theatre with a seating capacity of 2,011-seat (a nod to the year of its opening) has been built at a cost of 1.3 billion yuan (~USD $170 million).  Turning local planning restrictions to their advantage (the theatre could be no higher than the surrounding five and six story buildings), the architects dug 26 meters down to create what is, at the time of writing, the world’s deepest underground theatre – 570,000 square meters are underground.  It features a theatre largely dedicated and optimized to musical theatre programming. Plush maroon-velvet seats, stage that lifts and sinks and rotates and can even be turned into an ice rink or water pool.

The design keeps a low profile in the garden and sinks the main part of building underground. The aboveground section is no more than 10 m. Surrounded by expansive, tree-lined pathways, the main structure sits like a giant white wave among the neighboring buildings. Beautifully lit at night, the most striking design is a huge glass funnel in the center of lobby, where light, water and air converge, against the the glass walls emitting a soft blue light, the source of which is a floor-to-ceiling blue-stained-glass mural. Audience members enter the building from the street level and find themselves already at the theatre’s 3rd floor balcony.  Most audience members when entering go immediately down via grand staircase to the main lobby.

The very large lower lobby is often used for corporate events, product announcements, sponsorship activities, announcing future shows and other press events. In addition, the management publish a magazine that is distributed to VIP guests throughout Shanghai 2-3 times a year that gives updates to their programming and information about what is happening with the facility.

The theatre is state-funded to the tune of RMB 50 million but receives no other subsidy, and so it is reliant on ticket sales, rentals and sponsorships.

The venue is largely a state-owned enterprise, and the Cultural Plaza is listed as an asset of the state.  Designed by US architectural firm Beyer Blinder Belle [originally designed by architect Richard Blinder who died in 2006] whose design the “White Wave” became a sort-listed finalist after a 2003 competition to create a new iconic park and theatre — a signature project undertaken by the Chinese government for the 2010 World Expo.  The theatre and park design were refined in later 2005 prior to construction.

* to conform to Chinese law, a local Chinese firm must be the architect, so foreign companies engage a local firm to consult. 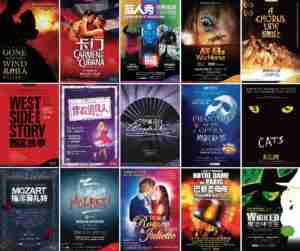 Shanghai Culture Square Theatre opened in September 2011, and was China’s first theatre designed and constructed especially for the performance of musicals at the time. Since its opening, the theatre has systematically introduced musicals from various parts of the world, as well as popular plays from the West End, yet mostly most B and C level touring shows with the suggested appearance they actually came from Broadway.

Originally, the theatre was to exclusively present musical theatre, but the government issued a new directive to maintain musicals at 50% of the programming time, and the balance to be made up of jazz festivals and small concerts (such as Diana Krall).

The theatre opened with an “Ultimate Broadway” concert (~ RMB 10 million) it produced itself (engaging South African GWB to put it together, after their original plan to present the Dutch version of Disney’s Mary Poppins fell apart over language and logistics rendering it prohibitively expensive.

The physical seating capacity is on the low end for international musical theatre, however, the Culture Square Theatre works around this issue by booking 2nd and 3rd tier, lower quality touring shows.  With a surprisingly low level of theatrical marketing not yielding enough demand for very long runs (measured in months, not individual performances), they do not yet think that large high-quality shows are economically viable as evidenced by the Mary Poppins cancellation and lack of any 1st class Broadway touring shows.

The Culture Square Theatre began to produce its own shows, and created the “Ultimate Broadway” series, a concert of musical highlights. The Ultimate Broadway concerts cost about 10 million yuan to produce. The Culture Square creates the set design, props, costume, projection, light and sound designs, hire designers and directors (from South Africa) to work with 2nd tier actors with some form of credit from either a Broadway or West End show in the program bios. This concert is far cheaper and easier to produce than a full-length musical.

The Culture Square Theatre itself has an international class stage area. However, the physical location is off the beaten and visible path of most Shanghai residents and tourists, making it more difficult (and expensive) to market and sell the shows. If the theatre was located in Peoples Square or directly off the bund, it would have been ideal.

Having said all this, by comparison to other theatre’s in the Chinese marketplace, the key strength of the Culture Square Theatre is its forward thinking creative management. 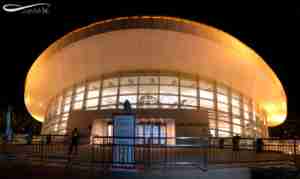 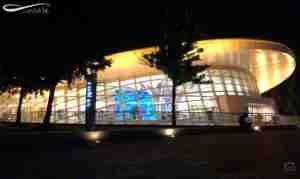