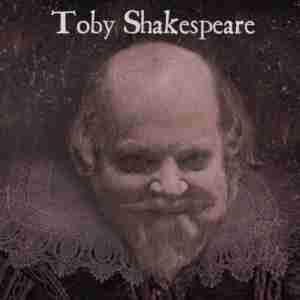 An April 23 (May 3 in today’s calendar) tribute from Toby to the bard — William Shakespeare was born & died on the same day… born on April 23, 1564 and died April 23, 1616 (age 52) in Stratford-upon-Avon.  English poet, playwright and actor, widely regarded as both the greatest writer in the English language, and the world’s pre-eminent dramatist.  He is often called England’s national poet, and the “Bard of Avon”.  His plays have been translated into every major living language, and are performed more often than those of any other playwright

No one knows really what Shakespeare looked like. No written description of Shakespeare’s physical appearance survives, and no evidence suggests that he ever commissioned a portrait, so the ‘Droeshout engraving’ (used in the First Folio), which writer Ben Jonson approved of as a good likeness.

Shakespeare’s father was probably a common tradesman. He became an alderman and bailiff in Stratford-upon-Avon, and Shakespeare was baptized in the town on April 26, 1564. At age 18, Shakespeare married Anne Hathaway, and the couple had a daughter in 1583 and twins in 1585. Sometime later, Shakespeare set off for London to become an actor and by 1592 was well established in London’s theatrical world as both a performer and a playwright.

He became a member of the popular theater group the Lord Chamberlain’s Men, who later became the King’s Men. The group built and operated the famous Globe Theater in 1599. Shakespeare ultimately became a major shareholder in the troupe and earned enough money to buy a large house in Stratford in 1597.

Although pirated versions of Titus Andronicus, Romeo and Juliet and some other plays were published during Shakespeare’s lifetime, no definitive collection of his works was published until after his death. In 1623, two members of Shakespeare’s troupe collected the plays and printed what is now called the First Folio (1623). 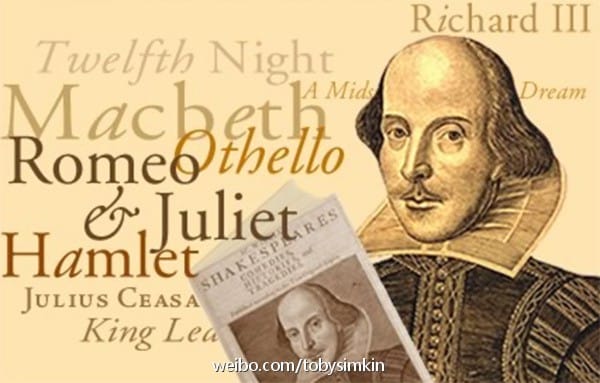 “All the world’s a stage,
and all the men and women merely players:
they have their exits and their entrances;
and one man in his time plays many parts ...”
—As You Like It, Act II, Scene 7, 139–142

To Be Or Not To Be, that is the question

HAMLET for Shakespeare’s 400th starring (in video order) Paapa Essiedu, Tim Minchin, Benedict Cumberbatch, Harriet Walter, David Tennant, Rory Kinnear, Sir Ian McKellen, Dame Judi Dench and HRH the Prince of Wales (Prince Charles):  “To Be Or Not To Be” that is the question! Quite brilliant…

Hamlet is the longest of Shakespearean plays, lasting about about 4-5 hours.  The soliloquy where Hamlet contemplates suicide is written in iambic pentameter in the scene, Act III, Scene I,  often called the “nunnery scene”.   Theatre history suggests that it was first performed by Shakespeare’s friend, actor Richard Burbage as part of the acting troupe called the King’s Men in about 1600 at the Globe Theatre in London.

While Polonius and Claudius hide and eavesdrop, Hamlet breaks into this most famous soliloquy, perhaps the best-known speech in the English language. Hamlet returns to the question of suicide, wondering if it would be preferable to end his life or not:

To be, or not to be: that is the question:
Whether ’tis nobler in the mind to suffer
The slings and arrows of outrageous fortune,
Or to take arms against a sea of troubles,
And by opposing end them? To die: to sleep;
No more; and by a sleep to say we end
The heart-ache and the thousand natural shocks
That flesh is heir to, ’tis a consummation
Devoutly to be wish’d. To die, to sleep;
To sleep: perchance to dream: ay, there’s the rub;
For in that sleep of death what dreams may come
When we have shuffled off this mortal coil,
Must give us pause: there’s the respect
That makes calamity of so long life;
For who would bear the whips and scorns of time,
The oppressor’s wrong, the proud man’s contumely,
The pangs of despised love, the law’s delay,
The insolence of office and the spurns
That patient merit of the unworthy takes,
When he himself might his quietus make
With a bare bodkin? who would fardels bear,
To grunt and sweat under a weary life,
But that the dread of something after death,
The undiscover’d country from whose bourn
No traveller returns, puzzles the will
And makes us rather bear those ills we have
Than fly to others that we know not of?
Thus conscience does make cowards of us all;
And thus the native hue of resolution
Is sicklied o’er with the pale cast of thought,
And enterprises of great pith and moment
With this regard their currents turn awry,
And lose the name of action.—Soft you now!
The fair Ophelia! Nymph, in thy orisons
Be all my sins remember’d.

prefixed by “Thou“, combine a word from each column…. 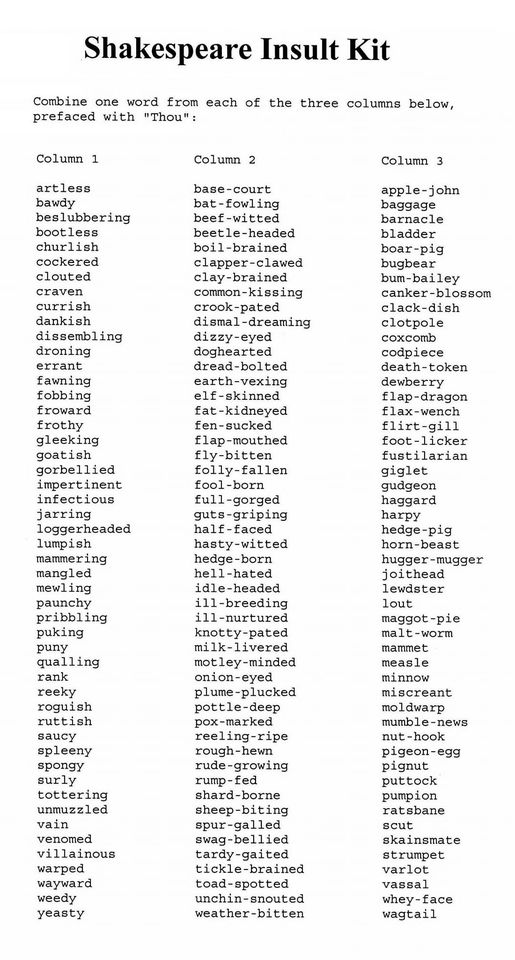 Shakespeare has stood the test of time

We owe a lot to Shakespeare — more than you think.  Here’s some popular sayings we say or write so often, that have become clichés:

IN A PICKLE
Meaning: a difficult or uncomfortable situation.
From: The Tempest (Act 5, Scene 1)

IT’S ALL GREEK TO ME
Meaning: that something is indistinguishable or incomprehensible.
From: Julius Caesar (Act 1, Scene 2)

FIGHT FIRE WITH FIRE
Meaning: Respond to an attack by using a similar method as one’s attacker.
From: King John (Act 5, Scene 1)

ONE FELL SWOOP
Meaning: Doing a lot of things all at once, with one action
From: Macbeth (Act 5, Scene 3)

LOVE IS BLIND
Meaning: an inability to see shortcomings in a lover; doing crazy things when in love.
From: The Merchant Of Venice (Act 2, Scene 6)

A HEART OF GOLD
Meaning: a very kind or honorable person
From: Henry V (Act 4, Scene 1).

BREAK THE ICE
Meaning: to start conversation.
From: The Taming Of The Shrew (Act 1, Scene 2).

LAUGHING STOCK
Meaning: a person subjected to ridicule.
From: The Merry Wives Of Windsor (Act 3, Scene 1).

WEAR YOUR HEART ON YOUR SLEEVE
Meaning: to express your emotions openly, especially when others notice without much effort.
From: Othello (Act 1, Scene 1).

METHOD TO HIS MADNESS
Meaning: Someone’s strange behaviour has a purpose.
From: Hamlet (Act 2, Scene 2)

SEND HIM PACKING
Meaning: Send away ignominiously.
From: Henry IV, Part I

THE WORLD IS YOUR OYSTER
Meaning: being in a position to take advantage of life’s opportunities.
From: The Merry Wives Of Windsor (Act 2, Scene 2)

MAKES YOUR HAIR STAND ON END
Meaning: Something alarming or frightening
From: Hamlet

LIE LOW
Meaning: Keep out of sight; bide one’s time
From: Much Ado About Nothing

CATCH A COLD
Meaning: To get sick.
From: Cymbeline (Act 1, Scene 4)

ALL THAT GLITTERS IS NOT GOLD
Meaning: Things that seem most valuable on the surface are often deceptive
From: The Merchant of Venice (Act 2, Scene 7)