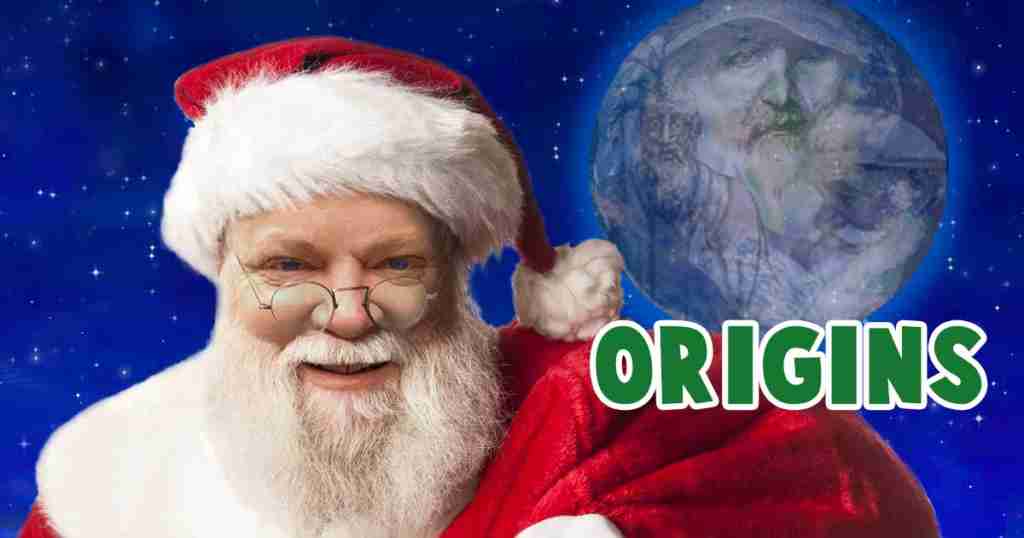 The Development of the Jolly Man

The Origin of St Nicholas 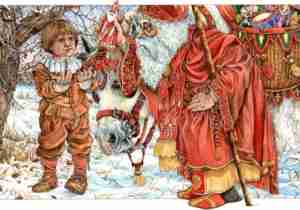 St Nicholas was born in 280 AD, in Patara, a city of Lycia, in Asia Minor. He became the gift giver of Myra. His gifts were given late at night, so that the gift giver’s identity would remain a secret.

St Nicholas was a Christian priest, who later became a bishop. He was a rich person, and traveled the country helping people, giving gifts of money and other presents. St Nicholas did not like to be seen when he gave away presents, so the children of the day were told to go to sleep quickly or he would not come! Nothing has changed and Santa Claus will not arrive this Christmas unless the children go to sleep early.

A famous story about St Nicholas, is about a poor man who had no money to give to his three daughters on their wedding day. St Nick dropped bags of gold into the stockings which the girls had left to dry by the fire. The sisters found the gold and ever since, children have hung up stockings on Christmas Eve hoping that they will be filled with presents by Christmas morning.

Despite being quite young Nicholas had earned a reputation for kindliness and wisdom. In the year 303, the Roman emperor Diocletian commanded all the citizens of the Roman Empire, which included Asia Minor, to worship him as a god.

Christians believed in one god and one god alone, so their conscience would not allow them to obey the Emperor’s order. Angered by their stubbornness, Diocletian warnd the Christians that they would be imprisoned. The Emperor carried out the threat and St Nicholas who resisted too was also imprisoned. For more than five years, St Nicholas was confined to a small cell. He suffered from cold, hunger, and thirst, but he never wavered in his beliefs. In 313, when Diocletian resigned, and Constantine came to power Nicholas was released, and he returned to his post as Bishop of Myra. He continued his good works and became even wiser and more understanding by the time of his death on December 6, 343.

In the eyes of the Catholics, a saint is someone who has lived such a holy life that, after dying and going to heaven, he or she is still able to help people on earth. They often become patron to different groups of people – one such was children and many legends sprang up to explain his presence.

By 450, churches in Asia Minor and Greece were being named in honor of him. By 800, he was officially recognized as the a saint by the Eastern Catholic Church.

In the 1200s, December sixth began to be celebrated as Bishop Nicholas Day in France.

By end of the 1400s, St Nicholas was the third most beloved religious figure, after Jesus and Mary. There were more than 2000 chapels and monasteries named after him.

The origin of Santa Claus

Over the centuries, St Nicholas’ popularity grew, and many people in Europe made up new stories that showed his concern for children.

As children from other countries tried to pronounce Sinter Klass, this soon became Santa Klass, which was settled as Santa Claus. The old bishop’s cloak with mitre, jeweled gloves and crozier were soon replaced with his red suit and clothing seen in other modern images.

The picture of a pot-bellied, bearded and well-ringing Father Christmas that we know more recently was an origin of Santa Claus. He was created by Thomas Nast, a North American cartoonist, in drawings he made for Harper’s Weekly during a period of 20 years from 1863 onwards. He based the pictures on Clement Moore’s poem, gradually developing Moore’s small fat, elf-like creature into the Father Christmas / Santa Claus now known to all.

Images of Santa Claus were further popularized through Haddon Sundblom’s depiction of him for The Coca-Cola Company’s Christmas advertising in the 1930s. The popularity of the image spawned urban legends that Santa Claus was in fact invented by Coca-Cola or that Santa wears red and white because they are the Coca-Cola colors. In reality, Coca-Cola was not the first soft drink company to utilize the modern image of Santa Claus in its advertising – White Rock Beverages used Santa to sell mineral water in 1915 and then in advertisements for its ginger ale in 1923. Furthermore, the massive campaign by Coca-Cola simply popularized the depiction of Santa as wearing red and white, in contrast to the variety of colours he wore prior to that campaign; red and white was originally given by Nast.

The image of Santa Claus as a benevolent character became reinforced with its association with charity and philanthropy, particularly organizations such as the Salvation Army. Volunteers dressed as Santa Claus typically became part of fundraising drives to aid needy families at Christmas time.

In this day and age, many non-believers contest the physics of Santa, and even Father Christmas himself is concerned about budgets in these modern times.