Upon arrival in Australia in 1965 (from England on the SS Oriana), we took possession of our family home located at 137 Mugga Way, Red Hill, Canberra, Australia.   The home had been custom designed and built, and was located in a very upmarket area of Canberra.  Red Hill, a typically outback rocky outcrop laden with deadly snakes & spiders as well as kangaroos, was literally across the street.

It was from this home I had my first memories of seeing the newspaper photo of Neil Armstrong walking on the moon, learning to swim, my father heading to the war in Vietnam, and it was the only time in when our entire family was living together under a single roof in my memories.  We played “army” and “cowboys and indians” on Red Hill (with my older brothers nearly killed me by making me sit on a log that under it was a redback spiders nest).   My oldest brother, Richard used to be naughty by “mooning” cars passing by at night.  It was in this house that I learnt that my mother was actually Santa Claus, when my brother Tim took me into my parents bedroom the night before Christmas and showed me the closet behind the door had all these fabulous toys, that the next morning I would awake too thinking they were from Santa.  It was from this house that I first went to school, and first learnt about volunteering, doing “rag drives” for my school (collecting clothes from homes in the area for underprivileged) 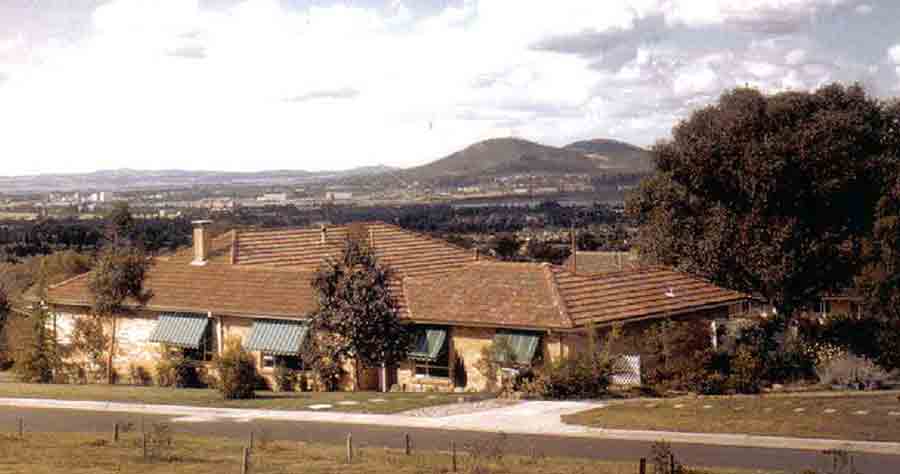 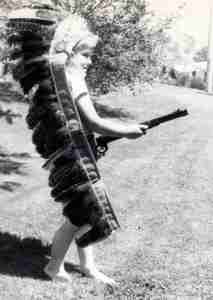 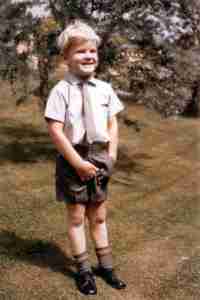 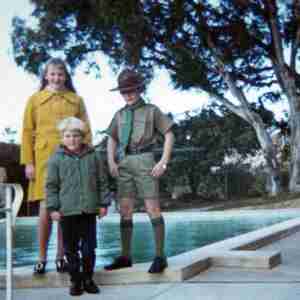 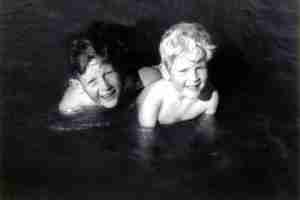 Before we left Australia in 1962 we decided that it would be advisable to build a house in Canberra, as Defence Headquarters was moving from Melbourne to Canberra. Canberra at this stage was still being built (and still is!) and Commonwealth Bridge and King’s Avenue Bridge were in place but were built over paddocks and the lake wasn’t flooded. The Scrivener Dam finally closed in September, 1963, but it wasn’t until the heavens opened in the following year that the space prepared for the lake filled up.

We visited Canberra and found a suitable block of land in Mugga Way. At that time all land was auctioned and the successful bidder had to build within six months or the land reverted to the Crown. Max’s father (Roy) went up from Melbourne for the auction, and the first indication we had that we had been successful was when we saw the headlines in a copy of the “Canberra Times” in Australia House in London, which read “Record price paid for block by Major Simkin”. We discovered that we had paid £3,600 pounds for the block, which in those days was a lot of money, but on present day values is laughable. We proceeded to build the house by post, which was a nightmare, particularly when it came to choosing all the small fittings! 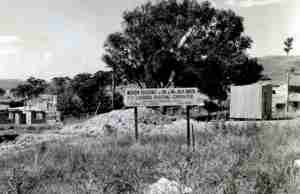 Through my R.A.F. connections I was able to get a free flight to Australia on one of their planes to finalize the furnishing and decorating of the house. I then found that I was pregnant with Toby and unable to fly with the R.A.F. so Max (my father) took my place. He organized carpets, curtains, etc., but couldn’t stay long enough for them to be installed. Since we were in England for another two years we decided to rent the house until our return.

Once again Roy Simkin went up to Canberra to oversee the unloading and installation of our household effects, and my friend Jean Scott helped him. It wasn’t until we eventually came home two years later that we discovered that a lot of things which came out of store weren’t ours, and that we had lost some of our good possessions. At that stage it was too late to do anything about it.

We were anxious to see our house, but found it in a disgraceful state, filthy and with furniture broken and covers ripped. It was a nightmare. An American couple had been renting it whilst we were away, but had moved out a few months earlier and left their teenage son in charge. Apparently he had been a nuisance to the neighbours, holding loud parties and had a band practicing and playing frequently. Their favourite party trick was to go all round the house without touching the floor. Consequently all wall sconces were broken, furniture was wrecked, and everything was dirty. The new carpet was burned where embers had fallen out of the fire without any protection. My dishes were smashed and dirty plates were piled high all over the place with congealed food and hundreds of cigarette butts. It was disgusting. My cooking dishes had been used on the barbecue and even years later we were digging up knives and forks, etc., in the garden.

It was so bad that the Canberra Times planned to do a two page spread with photographs, telling of the dangers of leasing properties, but their lawyers stepped in and stopped it as it would apparently lead to all kinds of trouble. However I still have the photographs. We had to get in a team of cleaners, fix up all the damage, and early in the piece had to replace the carpet.

We had appointed an agent to look after the house but she obviously hadn’t lifted a finger to check on things. We were able to get information about all this from a young man who had answered an advertisement to share accommodation and he had moved in for a few days, but was so disgusted at the behaviour of the others that he moved.out. He came to collect some items he had left behind, but of course they had disappeared. He told us that the house was being used as a brothel and we later learned that the neighbours had suspected this.

All this in Mugga Way, no less – the most prestigious street in Canberra. 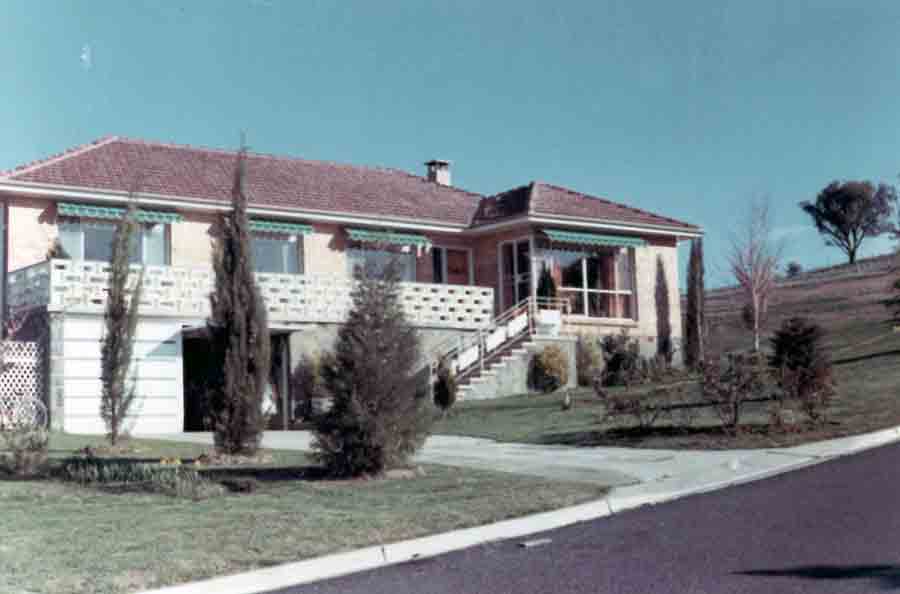 The next conflict came when I was living in Canberra and once more was one of the lucky ones as I was living in my own house when my husband was posted to Vietnam. I know of many families who were living in married quarters and experienced a lot of unpleasantness when they had nowhere else to go, and their quarters were required for other families.

There was such controversy in Australia over our involvement in Vietnam, that the wives and families left behind were given very little sympathy or understanding. It was very lonely and the responsibilities placed upon us to run homes and families were enormous. It was terrifying for the wives, as they constantly heard reports of fatalities and serious injuries, and it was like living on the edge of a precipice and feeling that no one cared. Naturally the fear was suppressed as far as possible, and only surfaced at certain times, but it was always there, deep down.

I had one experience which was indicative of the attitude of many civilians. With four children ranging in age from five to fifteen, we felt that rather than take them away for a holiday, it would be a better idea to install a swimming pool in time for the school holidays. The firm employed had several other pools under construction and kept a large chart in the office showing the stage reached with each one. Our pool was started weeks ahead of the school holidays, but moved very slowly and on checking the chart in the office, it soon became apparent that my pool was being held up whilst all the other pools were ahead of schedule. I took this up with the manager, who knew the reason for putting in the pool, and he made all kinds of hollow promises and was most unhelpful. Eventually, after no one had been near the pool for a couple of weeks, and the school holidays were about to begin, I bumped into the manager in the local shopping centre and he informed me that all the workmen were going on holiday the next day and wouldn’t be starting work again until the end of January! My pool was at the stage where it needed the final finish of marblesheen, and without it there was no way we could fill it and use it. After an hour of coping with crying, hysterical children, I called the head office in Sydney and informed them that I had kept a diary of every stage of the construction and could prove that it had been deliberately held up. To cut a long story short men were sent from Sydney the next day to finish the pool.

The point of all this is to show the kind of treatment meted out to wives and families of men in Vietnam, and I know I’m by no means unique. Fortunately I’m able to fend for myself, but there are many army wives who have never had the opportunity to learn how to do this, and are consequently unfairly treated.

There is a great misapprehension in the civilian community that we lead a charmed life, have free housing, free phones, cars, batmen and overseas postings which are in fact permanent holidays, etc., They have no conception of the agonies the children experience every time they have to change homes, schools and make new friends. It’s a terrible experience to be separated from children who have to attend boarding school because there is no suitable school at the new destination, or the continuity of the education would be disrupted if they moved. Wives, too, have to make new friends and set up house in strange places. These things are so much worse when the men are away and engaged in an operational capacity. 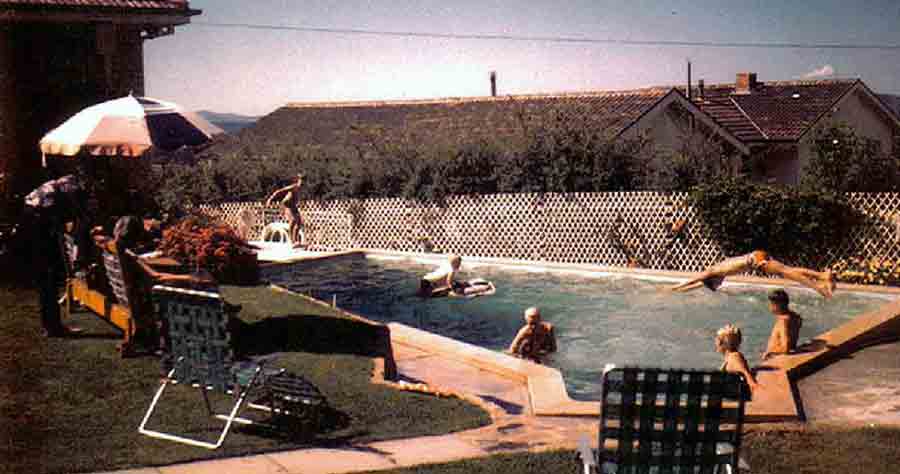 Personally, I feel that on the whole it’s a very interesting life and I wouldn’t have wanted anything different. I do feel, however, that the ups and downs of army life should be made clear to every army bride. Given the proper attitude it can be a most fulfilling experience.

Later that year we added an extension to the house – a large dining room and a family room. 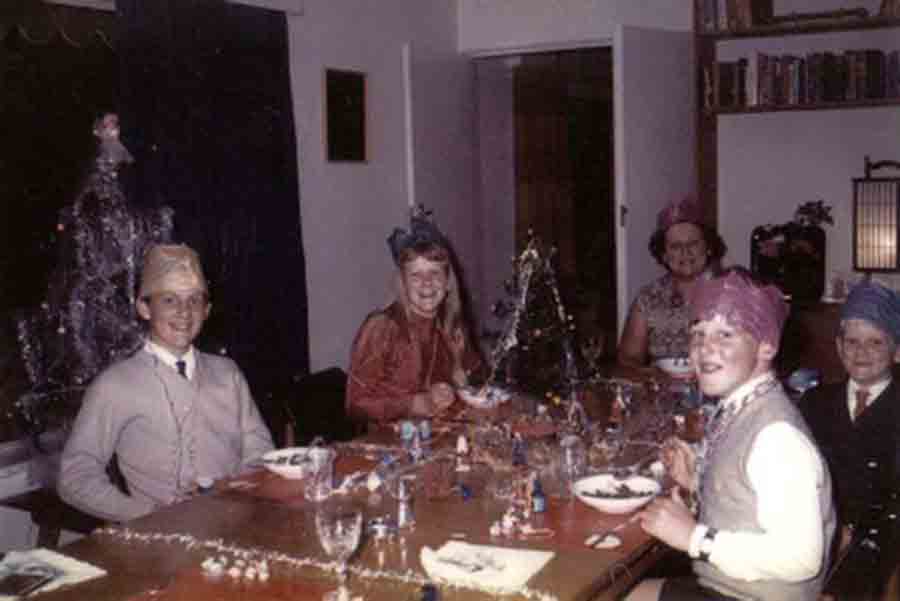 In 2017, my family scattered some of my mothers ashes on Red Hill.