Chinese Money is called Renminbi (RMB) (means “People’s Currency”). The popular unit of RMB is Yuan (also known as Kuai).  1 Yuan = 10 Jiao, 1 Jiao =  10 Fen.  Chinese currency is issued in the following denominations: one, two, five, ten, fifty and a hundred Yuan; one, two and five Jiao; and one, two and five Fen. 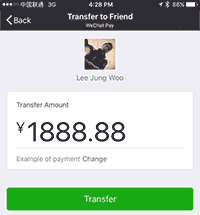 Be warned only the 4/5 star businesses and large (expensive) shops will take credit cards — everything else is cash (no US dollars — all yuan/RMB) UnionPay (debit card), Apple Pay, Alipay or WeChat payment — However, you won’t need much cash — there are lots of ATM’s around, and I’ve found that withdrawing RMB ¥5000 at the beginning of a week is more than enough to buy gifts for friends back home, the occasional drink, sightseeing ticket and delicacies etc…

Everything, with very few exceptions is cash only (paper bills) — credit cards are unknown to them, if they are, it’s the local Chinese equivalent only called “UnionPay”.

Counterfeit cash is a big problem, I’ve been stuck a couple of times having received counterfeit RMB ¥50 and RMB ¥100 notes that had to be thrown away.  You need to get cash from a reputable source only (aka banks, 4/5 star hotels) and always be suspicious of change received from restaurants and shops.  Chinese assistants routinely check each bill when we receive change and is often haggling with the merchant to change a suspicious bill.  Every reputable shop has a counterfeit bill detector.  If you are given old dirty or torn money, you can ask for different change.  Often vendors will try to get rid of old, torn money by giving change to foreigners.

For those living in China, with a Chinese bank account, more than 90% of transactions and purchases are handled electronically through WeChat payment, AliPay or Apple Pay.

WeChat payment is used commonly and most widely accepted for taxi’s, groceries, restaurants, bars plus many online purchases.

AliPay is used commonly and most widely accepted for taxi’s, plus the majority (if not all) online purchases.

Apple Pay can be used in many taxi’s and select stores, including Starbucksin China.

There are typically no exchanges or refunds in Chinese shops.

Pay attention to how much cash you have with you. It is a good idea to keep enough to get a taxi back to your hotel, and a secret stash in a different pocket or place in your wallet for emergency. 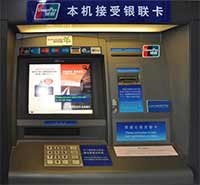 Global network-connected ATM’s (Cirrus, Plus) can be found in most larger cities these days. By far your best bet for cash is getting from an ATM machine (better rate than overseas or airport currency exchange, hotels, and is the same as local bank without the language difficulty). But you’ll also typically be charged a foreign exchange fee by the Chinese bank, as well as a fee from your own bank (so withdraw the maximum amount, which in many ATM’s is RMB 2,500 — some 3,000). Up to 20,000 RMB allowed per day per person.

Many ATM’s from bigger Chinese banks will accept major credit cards (Visa, MasterCard, Maestro, Cirrus, & AmEx). Also note that most ATM’s in China are located inside banks or shopping centers so are not accessible 24 hours/day.

The major banks include :

Before leaving home, contact your bank to let them know the dates you’ll be in China as well as to verify that your ATM/credit card will work. This is typically called a travel advisory.   As an additional back up, it’s a good idea to request a PIN from your credit card company so you can also use it at ATM’s (often takes a couple of weeks to process).

Budget using local currency.  Avoid transferring currency in and out of the country – there are significant controls and restrictions on this that would require 30 pages to explain, here are a couple of the highlights:

International monetary regulations allow you to travel with up to the equivalent value of USD $ 10,000 in a combination of any currency to nearly all countries in the world (including China), without need for any currency declaration.  If you can find a bank that can issue Chinese Renminbi overseas, this may be a smart way to ensure you have cash on arrival.  Note, overseas exchange to RMB (only available in recent years), will be subject to higher commission than if exchanging within China.

China is rather restrictive about hard currency exchange. Unlike other countries, you can’t just change money in a Bureau de Change on the main street or at most hotels. Changing foreign currency can be done at foreign exchange counters at most border crossings, international airports and most 5-star hotels but be warned all will charge a commission plus the exchange rate premium plus charges are applied by the bank/credit card provider.   It is a requirement that you produce your passport with visa to complete the transaction for Chinese currency control monitoring.

To avoid hefty commissions and bad rates, you have to go to a particular bank that provides this service in a few select locations.   Look for this sign to advise if the particular bank will allow currency exchange:

Banks will only accept major currency foreign bank notes that are undamaged. Notes that are even slightly torn will be rejected.