A decade ago in 2007, the Chinese Ministry of Culture through its China Arts and Entertainment Group (CAEG) and British theatrical producer Cameron Mackintosh announced a joint venture to co-produce Mandarin versions of Les Miserables, CATS, Mamma Mia!, Miss Saigon♦, The Lion King, The Phantom of the Opera, Mary Poppins and My Fair Lady.  They even started national auditions in October 2007 in Shanghai, Chengdu, Guangzhou and Beijing for Les Miserables with a planned opening in Beijing at The National Centre for the Performing Arts in November 2008.  But this never happened, as neither party could agree on the prospective partner’s idea of the joint venture.  This failed collaboration with Cameron opened an unexpected opportunity for South Korean CJ E&M (Cheil Jedang Entertainment & Media) a massive entertainment and media conglomerate.

Under pressure to develop the Chinese culture industry, and presumably not to loose “face” with the collapse of the highly publicized joint venture, the Ministry of Culture continued to pursue the expansion of the Chinese musical market. After failed collaboration attempts with the British, and recognizing the significant growth of the Korean musical market over the last decade, CAEG general manager Zhang Yu reached out to South Korean CJ E&M.

A joint venture was established between CJ E&M and CAEG, working through a local specially created entity, United Asia Live Entertainment (UAE), to gamble in presenting the Mandarin version of Mamma Mia!, China’s 4th attempt at a western musical localization.  Judy Craymer (the original creator/producer in London) licensed the production to the Koreans with the Chinese entities taking credit (billing) for it, with a pre-condition to involve western experts at every level of production development.

Industry rumors are that Mamma Mia! in Mandarin suffered financial difficulties, but while a likely commercial failure, it was a step forward for China’s musical theatre, showing that China could cobble together another localized version of a musical.  According to the producers, Mamma Mia! grossed RMB ¥80 million from July 2011 to early 2012, and attracted 250,000 ticket buyers, helped with branding and musical style by the movie version hitting China at the same time. 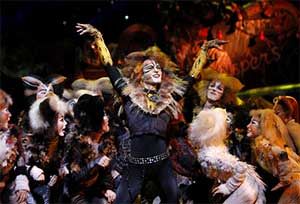 Dress rehearsal of the Mandarin version “Cats” in Shanghai

Encouraged by the perceived success of Mamma Mia!, this South Korean/Chinese joint venture gambled again with Andrew Lloyd Webber’s CATS in Chinese in 2012, with 159 performances in Beijing, Shanghai, and Guangzhou, and 71 in local cities throughout 2013.

Those that had seen Mamma Mia! or CATS encouraged the Chinese musical industry to become more open to the concept of better quality production values, since the production values of Mamma Mia! and CATS left other Chinese attempts at localization of musicals looking like school productions in comparison.

The Chinese Joint Venture through UAE entered the Chinese musical market by combining musical production technologies and management from Korea and the west while utilizing Chinese staffing and marketing. A team of musical production experts arrived in China and recruited Chinese actors and actresses, who were then rehearsed by the Korean/western producers. All content was translated through collaboration between the Korean and Chinese teams and approved by the shows licensor. After the initial production, the Korean/Western team left, and the Chinese staff and crew managed successive performances. In this way, the collaboration also resulted in training.

Chinese audiences in the decade or so have been more and more acclimatized to western entertainment thanks to ease of travel restrictions, affordable travel, the internet and the insatiable desire for foreign movies (either from streaming sites, pirated DVD’s or from cinema).  Audiences are getting smarter every day, and able to compare what they see in China to what they’ve seen on youtube or live on Broadway/the West End.

Chinese officials realized that the musical art form, with its high production values, well-crafted plotlines, and ultimately great spectacle, could visually and emotionally impress its audience and, as a contemporary art form, could be seen as a way to rejuvenate traditional Chinese theatre and build it’s own musical genre.

“Musical theatre will be like our TV. In the 1980s, our TV schedule was dominated by foreign dramas, but now it is fully loaded with pure Chinese productions.”
Jin Fuzai, professor at the Musical Department of Shanghai Conservatory of Music told CNN in 2011.

More importantly to Chinese theatre management, ‘Broadway’ branded musicals specifically can make huge profits solely on ticket sales. Yet in learning why the Broadway box office was booming, the Chinese have discovered that the Broadway model is not foolproof.  The Broadway musical theatre industry, while commercially successful, is highly speculative in nature. Many Chinese believed there might be models better suited for a commercially successful musical theatre industry in Mainland China. If there are, the Chinese have yet to find one.

To date, the exposure of musical theatre to Mainland China has largely been through the import and presentation of short tours of foreign touring productions, largely emanating from everywhere except Broadway.  These tours are typically, umm, I shall be polite and say ‘mistakenly’ promoted as “Broadway” shows.  In 2012 I wrote about this issue.  Today the brand of “Broadway” (which in the west remains the mark of excellence) has sadly became a Chinese moniker for all musical theatre.

Educators have additionally attempted creating localized musical theatre student productions that have met with different levels of success over time.

Starting with Central Academy of Drama (in collaboration with Nederlander Worldwide Entertainment), engaged Phoenix Entertainment (at the time the producer of the non-equity US tour of FAME, to create a Mandarin language production of FAME in Beijing.  The initial hope was that this Mandarin language production could tour China.  This concept while adventurous, in reality highlighted the fundamental issues endemic to the current state of musical theatre in China. A group of students, split largely into 2 groups — those with talent that wanted a career in musical theatre — and those that were placed at Central Academy of Drama due to family connections, but really only sought out quick and easy path to stardom in other industries. Throughout the rehearsal period, the US creative and production team leads were met with challenges of overblown ego’s, lack of discipline, and in some cases, lack of talent, but since it was a student production, the Phoenix team had to balance these issues and people with those that had base talent and a real desire to perform. The result was a mediocre production, that utilized 2 separates casts (an A and B cast, mixing people from each group noted above), and only played in Beijing.  Following this production, the decision was made by Nederlander Worldwide Entertainment to bring out the Phoenix English language production of FAME for its mainland China tour.

Other student organizations and productions such as Seven Ages in Beijing who over the past 6 years have met with mixed success with their student touring productions of How To Succeed in Business Without Really Trying, Man of La Mancha, Avenue Q and The Sound of Music (all directed by teacher Joseph Graves).  In 2018 they received investment from Alibaba’s Live Entertainment Business Group and  announced plans for future tours of Rodgers and Hammerstein’s Cinderella and Next to Normal.

Due to cultural differences, lack of talent pools (both onstage and off), language (extremely difficult to rhyme lyrics in local language without changing intent), government censorship, brand confusion and lack of investors wanting to produce 1st class quality productions, it’s hard to produce in China and it’s hard to sell in China. For producers, locating funds, talent and technical know-how while marrying a Western art form to Oriental sensibilities is daunting…

Despite this recent growth, the musical industry is still in its infancy in China.

Localization of Western musicals is not the long-term solution to produce big Chinese musical hits, but at the moment, it could be a good way to make the genre known to more audiences (and fun for expats to give them little tastes of home).  Chinese audiences have vastly different habits from Western audiences — the shocking failure of the Mandarin version of The Lion King in both China and South Korea to garner a long run (consummate with it’s typical western world multi-year sold out runs) is a great example.  Only productions made in Chinese and to the liking of the local audiences can we hope to succeed in this market on a long-term basis.

♦ It is likely that Miss Saigon was put on the banned list for presentation in China shortly after the CJV collapse, at least partially as punishment to Cameron.