I coax the blues right out of you... 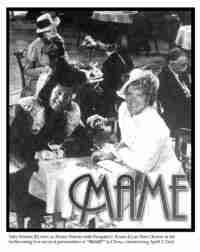 When I was managing The Beat in Australia in the mid 1980’s, my “drag” alter ego was “Mame Dennis” – even though I never actually dressed in drag.  Mame was simply my alter ego — fun spirited galavanting globe-trotter with fabulous hats living in an Art Deco world. (at the time, I was a Patrick Nagel fan and collector)

Rolling the clock forward a couple of decades, to sashay away the craziness of China life, my Beijing based business partner, Douglas Evans (formerly Managing / Producing Director of San Diego’s The Old Globe, and CEO of both The Bushnell Center for the Performing Arts, and the Stamford Center for the Arts) and I filled out our dream cast adopting more alter egos from the principle characters in the musical MAME. The freezer stocked to the brim with vodka loving Doug playing the lush Vera role, and I (of course) continued to play the over-the-top hedonistic Mame role.

At a League of American Theatres & Producers cocktail party at Jerry Herman’s house in Los Angeles in the late 90’s, I first told Jerry about my love of my alter-ego and my days at The Beat — we had some good laughs about it all.  He later stopped by my theatre guild office to kindly do an on camera testimonial for my new company launch. I saw him again for drinks in about 2004 when I told him about our China antics, and his reply was “that’s gorgeous – you coax the blues right out of China” – so with the approval of the composer and lyricist, this amplified our alter-ego characters.

To this day, we still call each by these names.

MAME is a musical with music and lyrics by Jerry Herman and book by Jerome Lawrence and Robert Edwin Lee.  Originally titled My Best Girl, it is based on the 1955 novel Auntie Mame by Patrick Dennis and a 1956 Broadway play by Lawrence and Lee, that starred Rosalind Russell.

Set in New York City and spanning the Great Depression and World War II, it focuses on eccentric bohemian Mame Dennis, whose famous motto is “Life is a banquet and most poor sons of bitches are starving to death.” Her fabulous life with her wealthy friends is interrupted when the young son of her late brother arrives to live with her. They cope with the Depression in a series of adventures.

Edward Everett Tanner III (18 May 1921 – 6 November 1976), known by the pseudonym Patrick Dennis wrote Auntie Mame: An irreverent escapade in 1955 which recalls his adventures growing up under the wing of his madcap aunt, Mame Dennis. Dennis wrote a sequel, titled Around the World with Auntie Mame, in 1958. Dennis based the character of Mame Dennis on his father’s sister, Marion Tanner.  Dennis led a double life as a conventional husband and father, and as a bisexual, in later life becoming a well-known participant in Greenwich Village’s gay scene. At one time, he was a butler to Ray Kroc, the CEO of McDonald’s.

In 1958, a film titled Auntie Mame, based on the play, was released by Warner Bros. Pictures, once again starring Rosalind Russell in the title role. Russell was nominated for an Academy Award and won a Golden Globe for her portrayal.

The musical MAME opened on Broadway at the Winter Garden Theatre on May 24, 1966, starring Angela Lansbury and Bea Arthur. Three years later, it transferred to the Broadway Theatre, where it remained until closing on January 3, 1970. Between the two venues, it ran a total of 1,508 performances and five previews.

Mary Martin turned down the title role, and after numerous actresses had been considered, the part went to Angela Lansbury. For its second run, Jerry Herman wanted to cast Judy Garland, but was declined by the producers of the show, who deemed Garland a liability based on her recent unreliable past experience on another production.

The musical was directed by Gene Saks, choreographed by Onna White with scenic design by William and Jean Eckart, costume design by Robert Mackintosh, lighting design by Tharon Musser and orchestrations by Philip J. Lang. The cast included Frankie Michaels as Patrick, Jane Connell as Agnes Gooch, Charles Braswell as Beauregard Jackson Pickett Burnside and Willard Waterman (who had played Claude Upson in the 1958 film) as Dwight Babcock.

The hit production spawned a film with Lucille Ball in the title role opening on March 27, 1974 with Bea Arthur reprising her supporting role.

Angela Lansbury recalled her time when she was playing MAME on Broadway and was visited by Lucille Ball who told her she was amazing in the part, deserved all the honors she was receiving and was a shoo-in for the film version. Lansbury was very touched by this until she noticed Ball in the wings during her performance, taking notes. It was then that she realized that she was never going to play the part in the film. Lansbury admitted in a 2009 interview with The Wall Street Journal that she never forgave Warner Bros. for passing her over.

Once Lucille Ball was cast, the musical’s songwriter Jerry Herman went to Warner Brothers executives and begged them to reconsider, explaining the reasons why he considered Lucille Ball to be wrong for the part. Herman disliked this film so much (and was also unhappy with the film of his prior musical “Hello, Dolly!” (1969) that no film of his musicals could be made again without his direct involvement and approval.  In later interviews, Ball said that making this movie “was about as much fun as watching your house burn down.” Reportedly she found the costumes uncomfortable, and the hats and wigs induced headaches.

When Lansbury took a two-week vacation from the Broadway production in August 1967, Celeste Holm played the title role, garnering ecstatic reviews and heading the National Tour. When Lansbury left the Broadway production on March 30, 1968, to take the show on a limited US tour, Janis Paige became the new Broadway Mame, in April 1968.  Paige’s run and the show itself continued to be so successful that she was followed by Jane Morgan (December 1968), who was followed by Ann Miller (May 1969).

A 1969 London West End production starred Ginger Rogers in the title role and Margaret Courtenay as Vera. It ran for a fourteen-month engagement at the Theatre Royal, Drury Lane with a special performance for Queen Elizabeth II.

Despite the presence of Lansbury, a much-heralded Broadway revival was ultimately unsuccessful. After 7 previews, it opened on July 24, 1983, at the George Gershwin Theatre, where it ran for only 41 performances.

A 40th anniversary revival was mounted at the Kennedy Center in 2006 starring Christine Baranski. 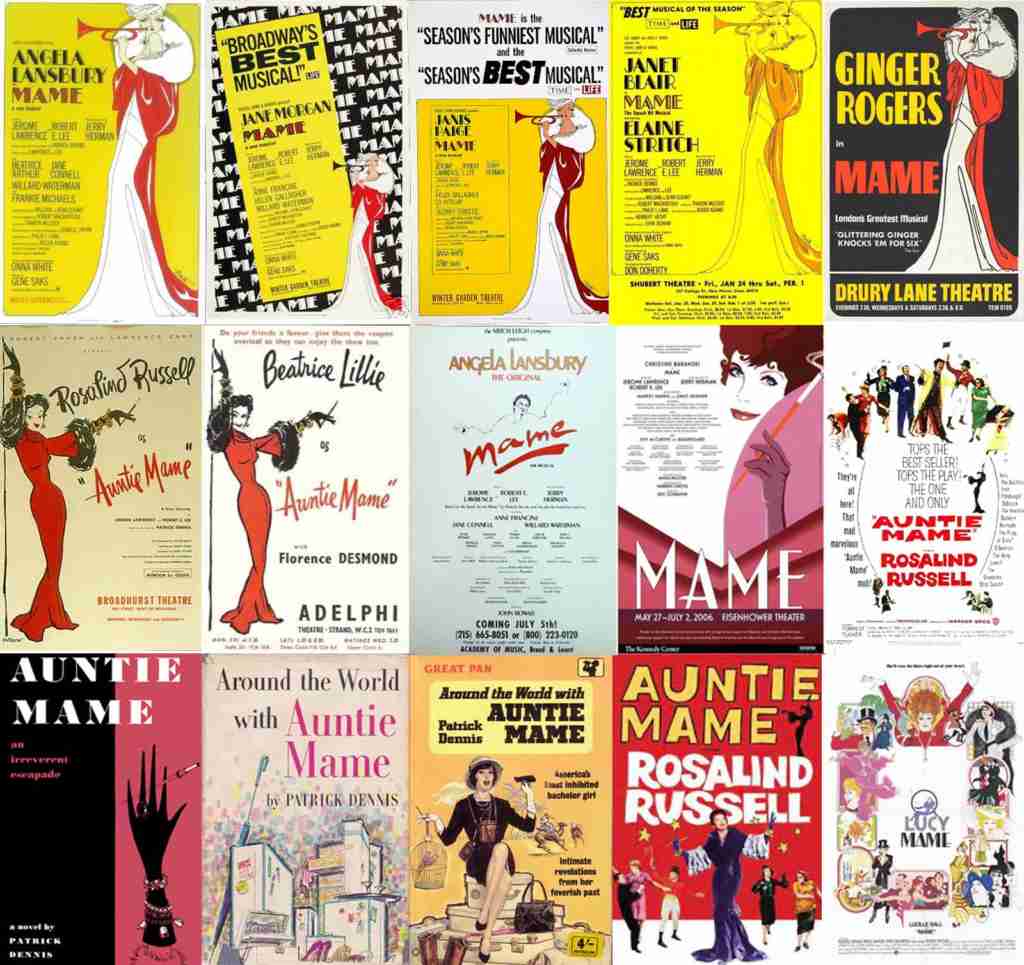 Madeline Kahn was originally cast as Agnes Gooch but was replaced right after shooting began. She was later told that when she reported for work on the set, Ball took one look at her, realized that Kahn’s curvaceous body could never be made to look like the frumpy, somewhat shapeless Gooch, and had her fired. Some sources claim that Kahn got herself fired on purpose so she could star in “Blazing Saddles” (1974) and still get paid, which by her contract wouldn’t have happened if she’d merely quit. 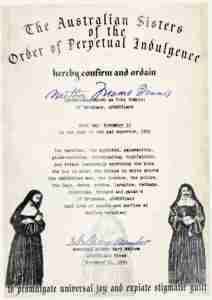 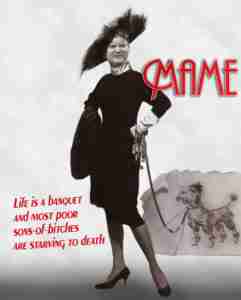 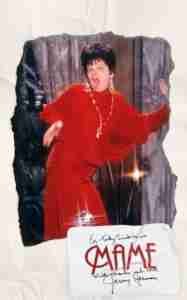 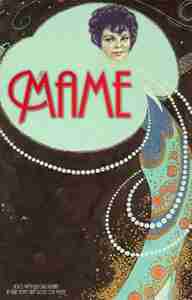 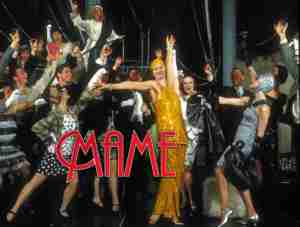 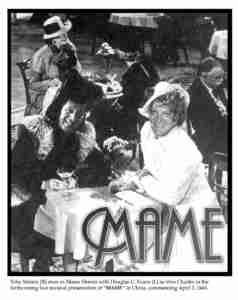 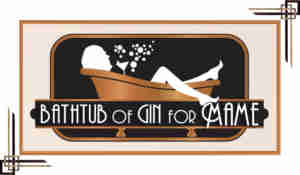 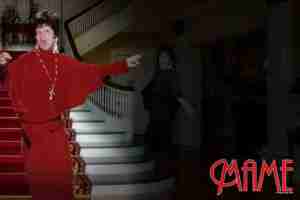 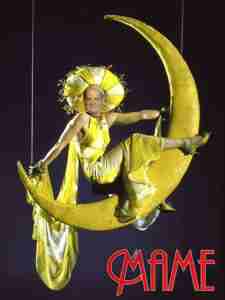 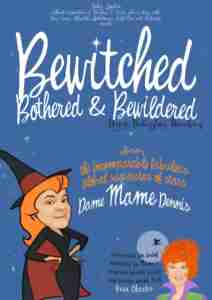 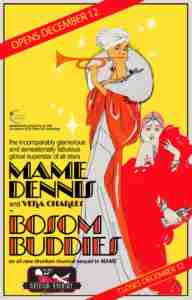 For fun, here is my parody of MAME from early 2020 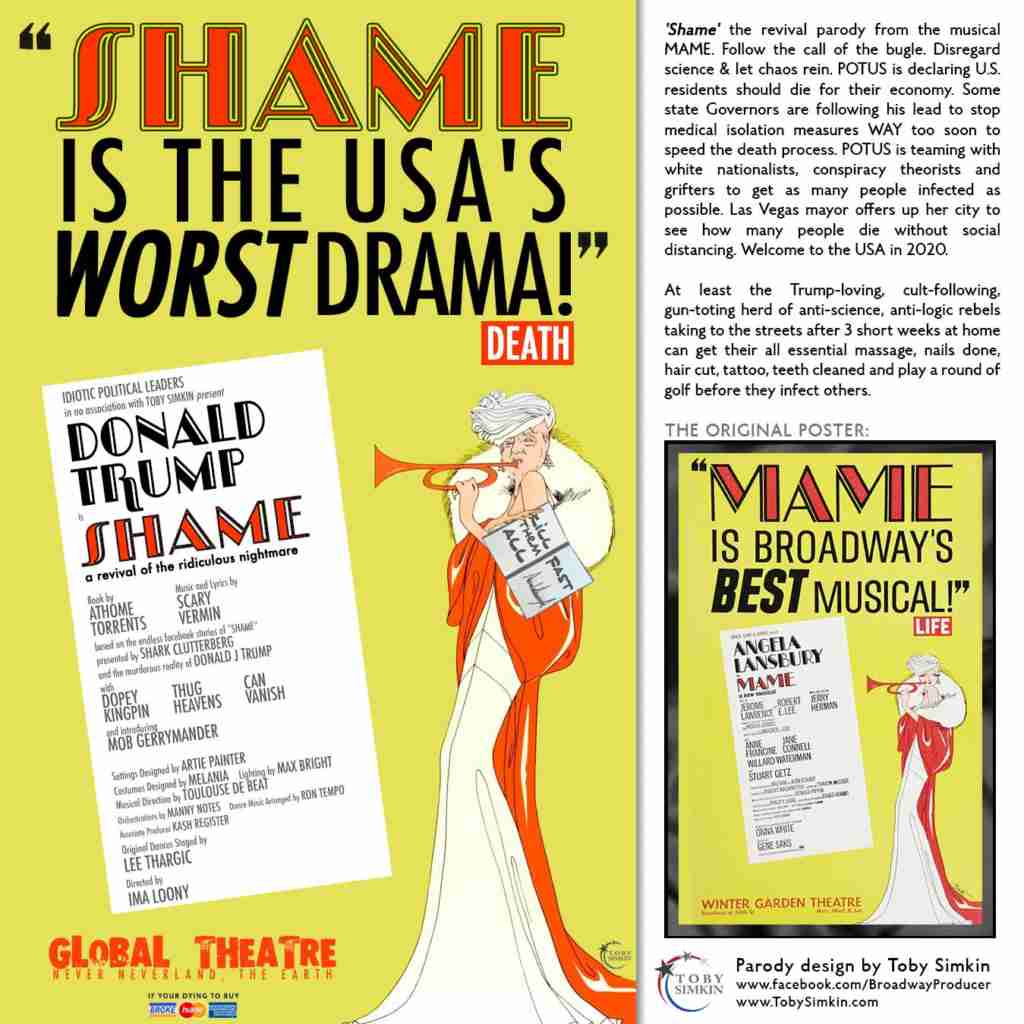