Lest We Forget: 11/11 Remembrance of the unknown soldiers

Remembrance Day.  Veterans Day.  Armistice Day.  No matter what you call it, November 11 is a date of utmost historical importance.  At the 11th hour of the 11th day of the 11th month each year, most of the world stops, and respect a silence to remember, mourn and reflect on the ultimate sacrifices that were made, not just in the great war, but in every war and conflict where military personnel have fought.  Every year in April, in addition to Remembrance Day, I remember ANZAC Day, for my own family sacrifices.

Throughout history, thousands of wars have been fought and millions of soldiers have lost their lives, but only a tiny fraction of victims had monuments erected, honored or remembered through stories. The majority of them had their remains sent home to their families where they now lie in cemeteries around the world. However, many fallen soldiers remain unidentified.

Tomb of the Unknown Soldier around the World

After World War 1, a movement began to commemorate these unknown soldiers with a single tomb, that would contain the body of one such unidentified soldier. That one soldier would then be a representative symbol of the sacrifice of all the unknown soldiers who died in battle. This is that history of the tombs I have compiled: 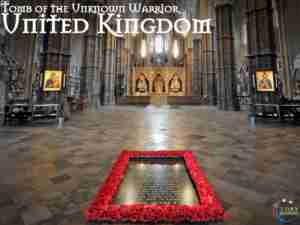 The idea of a Tomb of the Unknown Warrior was first conceived in 1916 by the Reverend David Railton, who, while serving as an army chaplain on the Western Front during the Great War, had seen a grave marked by a rough cross in a back garden at Armentières, which bore the pencil-written legend ‘An Unknown British Soldier’

Reverend Railton wrote to the Dean of Westminster in August 1920 proposing that an unidentified British soldier from the battlefields in France be buried with due ceremony in Westminster Abbey “amongst the kings” to represent the many hundreds of thousands of Empire dead. The idea was strongly supported by the Dean and the Prime Minister David Lloyd George.

On September 7th, 1920, in strict secrecy, 4 unidentified British bodies were exhumed from temporary battlefield cemeteries at Ypres, Arras, the Asine and the Somme. None of the soldiers who did the digging were told why.  The bodies were taken by field ambulance to GHQ at St-Pol-Sur-Ter Noise. Once there, the bodies were draped with the Union Jack flag.  Sentries were posted.

The General Officer in charge of troops in France and Flande