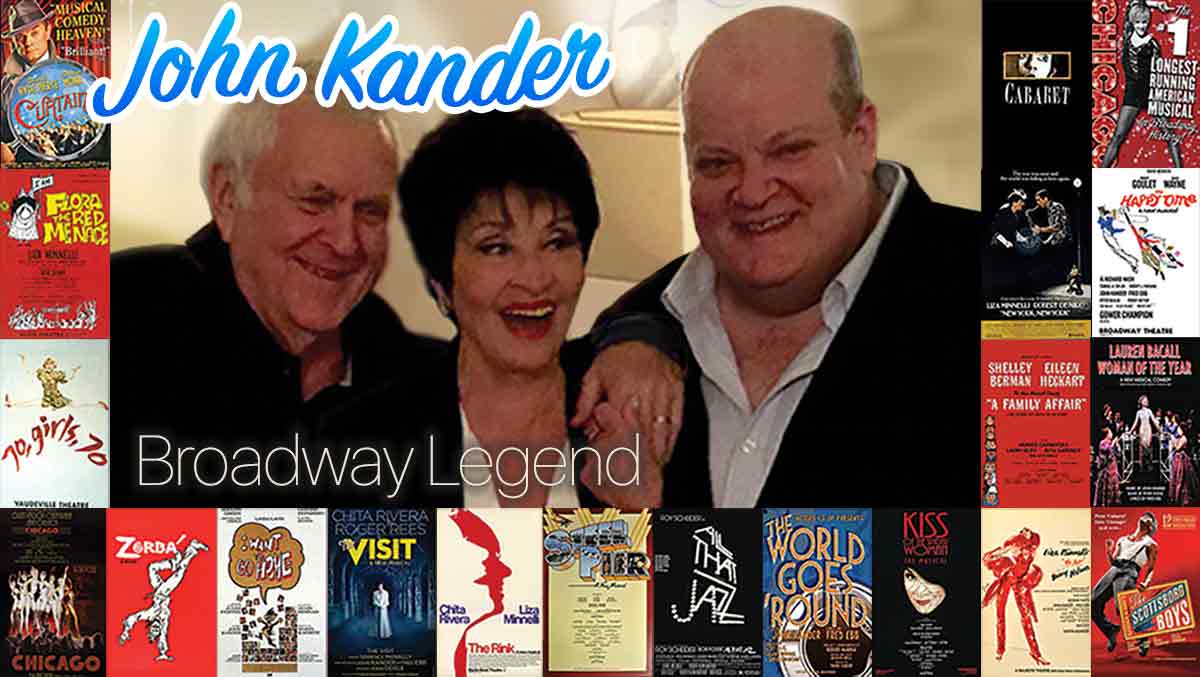 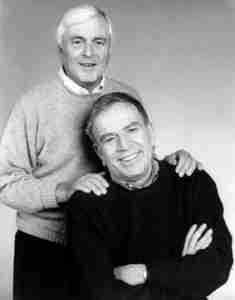 American composer John Kander (b. Kansas City, MO, March 18, 1927) is the musical partner of the songwriting team of Kander and Ebb, who together created at least sixteen Broadway shows, Flora the Red Menace (1965), Cabaret (1966), Chicago (1975), The Visit (2001) and Curtains (2007) among them. They also contributed material to fourteen films and television specials over their forty-year association.

Kander and Ebb were recipients of many Awards: three Tony Awards (1967 for Cabaret, 1981 for Woman of the Year, 1993 for Kiss of the Spider Woman), Britain’s Laurence Olivier Award (1998, for the London production of Chicago), an Emmy in 1973 and an Emmy nomination in 1993, both for Liza Minnelli television specials, and two Grammys (1967 for the Original Cast Album of Cabaret, and 1998 for the Musical Show Album of Chicago). The duo also received several award nominations, including  nine for Tonys, two for Oscars, and five for Golden Globes.

Both Cabaret and Chicago were made into films; the screen version of Chicago won the 2002 Academy Award for Best Picture.

Much of John Harold Kander’s childhood in Kansas City was spent singing and making music with his parents and brother. He took piano lessons from age six.  He attended Westport High School, before transferring to the Pembroke Country-Day School

During the 1940s, John Kander joined the United States Merchant Marine Cadet Corps. After completing his training in California and sailing between San Francisco and Asia, John Kander was stationed in Shanghai in 1945 until January 1946, and told me that he attended the infamous Shanghai Canidrome events there.  He said he also played piano in a Russian brothel in Shanghai for 3 days — “it was the warmest place in Shanghai because there were no radiators and everybody aboard his ship was there” he said. He left the Corps on May 3, 1946.

While a college student studying music at Oberlin College he wrote the music for three shows, and after graduating in 1951 he earned a Master’s degree from Columbia University in New York. During the summers of the mid-1950s Kander conducted and directed the chorus at the Warwick Musical Theatre in Rhode Island.

He got his start on Broadway as a substitute rehearsal pianist for Leonard Bernstein’s West Side Story. At his next gig, playing for the auditions for Gypsy, he met choreographer Jerome Robbins who suggested that Kander write the dance music for the show. In 1960 he did some arrangements for Irma la Douce, and in 1962, his first musical, A Family Affair, with lyrics by William Goldman, was produced but did not do well.

Kander owes his introduction to lyricist Fred Ebb in 1963 to music publisher Tommy Valando. Ebb, too, had recently had an unsuccessful Broadway debut. Their very first common project, the song “My Coloring Book,” was recorded by Barbra Streisand on her second album (1963) and nominated for a Grammy Award. Their first full-scale theatrical collaboration, Golden Gate, did not make it to the stage, but in 1965 the two put together Flora the Red Menace, introducing Liza Minnelli appearing for the first time on Broadway – and winning a Tony Award.

Though it was not a smash hit, Flora the Red Menace served to cement life-long relationships among Kander, Ebb, Minnelli, and producer Harold Prince.

The pair’s next collaboration, Cabaret, produced by Harold Prince, opened on November 20, 1966, at the Broadhurst Theatre and ran for 1,165 performances. It won the 1967 Tony for Best Musical, as well as seven others, and established fame worldwide for Kander and Ebb. The 1972 film adaptation starred Liza Minnelli and won several Oscars. The show has been revived twice, in 1987 and in 1998, when Cabaret won another Tony for Best Revival, three Tonys for actors, and seven more nominations.

After three more musicals (including Zorba 1968) the duo had another major hit, Chicago, in 1975, with over 900 performances. It was nominated for eleven Tonys, but Marvin Hamlisch’s A Chorus Line – swept up all the Awards. When Chicago was revived in 1996, it received its fair share with six. A huge hit, this record breaking revival is still alive.

Kander and Ebb’s second Tony was awarded in 1981 to Woman of the Year with Lauren Bacall; their third went to The Kiss of the Spider Woman, starring Chita Rivera, in 1993. Kander has received several other honors for his musical contributions. Oberlin, his alma mater, gave him an honorary doctorate in 1988, as did Niagara University, where he has taught as a guest, in 1994. Both Kander and Ebb were Kennedy Center Honorees and were awarded the Oscar Hammerstein Award for Lifetime Achievement in musical theater.

Next came The Visit, a musical with a book by Terrence McNally, lyrics by Fred Ebb, and music by John Kander, based on Friedrich Dürrenmatt’s 1956 satirical play about greed and revenge Der Besuch der alten Dame, originally developed as a vehicle for Angela Lansbury and was scheduled for a Broadway opening on March 15, 2001. It had been scheduled for a try-out in Boston for December 2000–January 2001. However, in July 2000 Lansbury withdrew due to the illness and subsequent death of her husband. Chita Rivera was signed as Lansbury’s replacement and the musical, directed by Frank Galati and choreographed by Ann Reinking, was staged with Rivera and John McMartin by the Goodman Theatre, Chicago, opening on October 1, 2001. Galati said that because of the September 11, 2001 attacks the show did not move to Broadway.   Another remount was staged at the Signature Theatre in Arlington, Virginia in 2008.

The partnership came to a sudden end when Fred Ebb died of a heart attack at home in New York City on September 11, 2004.  At the time, they were working on a new musical, Curtains. (The show is about a series of mysterious deaths during the production of a Broadway musical; coincidentally, two other members of the project’s team died while it was ongoing.) A new lyricist, Rupert Holmes, was brought in to help Kander continue and finish the work, which ran for 511 performances, winning a Tony for David Hyde Pierce, two Drama Desk Awards, and seven more Tony nominations.

Kander’s first musical without Ebb in many years, The Landing, with book and lyrics by Greg Pierce, premiered Off-Broadway at the Vineyard Theatre on October 23, 2013. The musical, which was a series of three “mini-musicals” was directed by Walter Bobbie and starred David Hyde Pierce and Julia Murney.

Kander’s musical Kid Victory, with book and lyrics by Greg Pierce, had its world premiere February 28, 2015 at the Signature Theatre in Arlington, VA. Kid Victory premiered Off-Broadway at the Vineyard Theatre on February 1, 2017 in previews, and opened officially on February 22, 2017. Direction is by Liesl Tommy with choreography by Christopher Windom. The cast features Jeffry Denman and Karen Ziemba.

Kander (music) and David Thompson (lyrics) wrote the dance play The Beast in the Jungle which opened Off-Broadway at the Vineyard Theatre. The play is directed and choreographed by Susan Stroman, and features Tony Yazbeck and Irina Dvorovenko.

In 2010, Kander married dancer and choreographer Albert Stephenson, his partner since 1977, in Toronto.  Kander’s grand-nephew, Jason Kander, was formerly the Missouri Secretary of State. 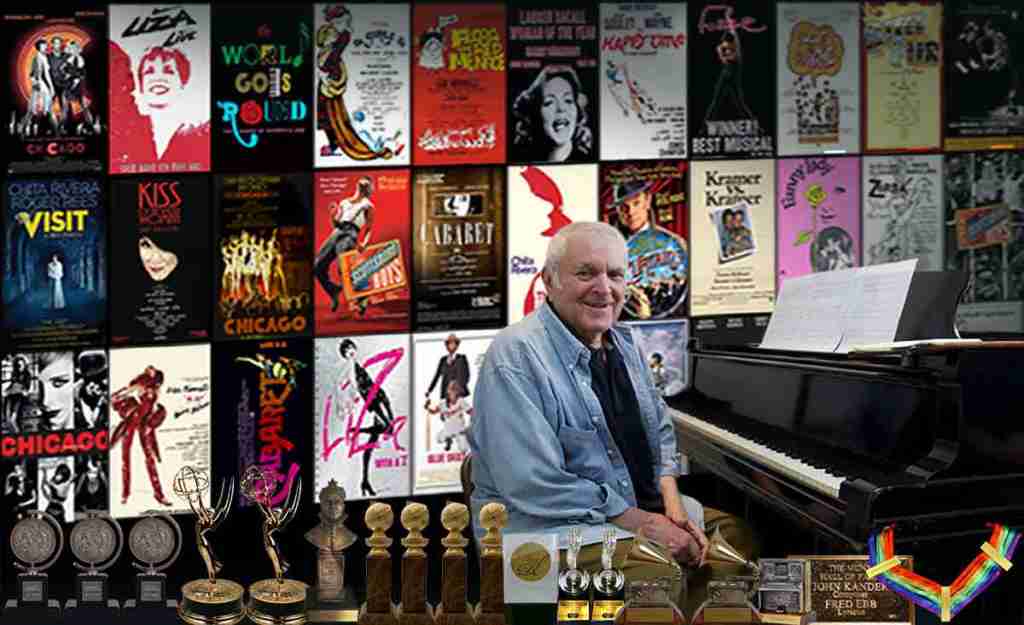 Legendary musical theater composer John Kander (“Chicago,” Cabaret,” “Curtains,” “Kiss of the Spiderwoman“, “The Visit“) invites Kirsten Childs into his home to walk through his multi-decade career, presented by the Dramatists Guild Foundation. 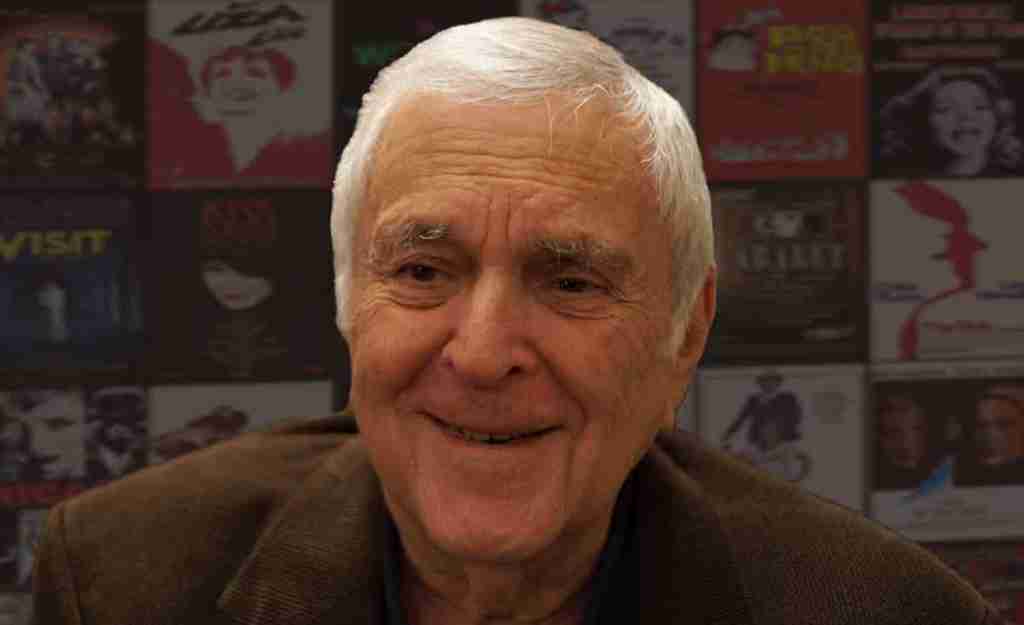 The National Endowment for the Arts: John Kander