Jaws in Martha’s Vineyard, America’s Cup in New England in 1974

The America’s Cup and JAWS

My parents and I had a holiday in New England, seeing the America’s Cup yachts in Newport, Rhode Island and a stay on Martha’s Vineyard in the summer of 1974, where we watched some of 26 year old Steven Spielberg’s 2nd directorial project with the movie JAWS (released a year later on June 20, 1975 in North America became the highest-grossing film worldwide, adjusted for inflation, it has earned almost $2 billion).  Little did we think then that ‘Bruce‘ would become a phenomenon.  (“Bruce” was the nickname given to the mechanical shark after Spielberg’s lawyer, Bruce Ramer). Crew members gave the film the nickname “Flaws“. JAWS won 3 Academy Awards (Best Film Editing, Best Original Dramatic Score and Best Sound) and has frequently been cited by film critics and industry professionals as one of the greatest movies of all time. JAWS spawned three sequels

The next day we drove up through New Hampshire and into Maine to the beautiful coastal town of Ogunquit, an Indian name meaning “Beautiful place by the sea”, where we had lunch with Ruth Olenchuk and her daughter Nancy, who was spending a few days with her. Ruth is the wife of Major General Peter Olenchuk, and Pete is working at the Pentagon whilst Ruth is spending the summer at their beach house. Nancy is married to a university professor who is about to take a post at Harvard.

After lunch we took a boat trip down the coast from Ogunquit to York and back. There are some lovely beaches and it’s a very pretty place. Ruth wanted us to stay overnight, but unfortunately, we didn’t have the time to spare, so late in the afternoon we set off to drive to Providence, Rhode Island, where we spent the night. On the way we stopped at a shop in York called “The Golden Rod” and bought a box of saltwater taffy, which apparently is world famous. It sounds revolting but is actually very nice. That night we had dinner in a replica of an old English pub. 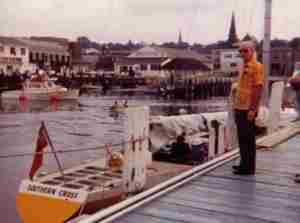 The next day we drove to Newport, Rhode Island, where we inspected the Americas Cup contestants, “Gretel II” and “Southern Cross“. I couldn’t get over the height of the masts – 90′. The crews were swarming all over the boats making various adjustments, and whilst we were there the tender “Offsider” towed “Gretel II” out to sea, where she went for a test sail.

We also saw “Valiant“, which I don’t think will be in this year’s race and “Courageous“, a strong contender, was out of the water being painted. It was all very interesting. There was no sign of the French boat. Afterwards we went for a drive around the coast road and saw the most magnificent houses imaginable. Some were like castles and several were open to the public, including the Vanderbilts’ mansion, but we didn’t stop.

The weather was not on our side.  We had some heavy rain and overcast days, each day was different, but things started to get better as we got closer to our holiday destination. 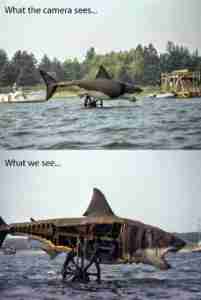 We spent a few days on Martha’s Vineyard, which is just off the southern coast of Massachusetts. Max had booked an inexpensive hotel in Edgartown, which seemed like such a good deal at the time. We arrived in our car on a ferry. Little did we anticipate that the reason it was so cheap, is that a film was being made in the town, and everywhere, and I mean everywhere, was taken over by the movie.

Edgartown was once a whaling village and inspired Melville’s Moby Dick and there is a fascinating Whaling Museum which we enjoyed.

But the short holiday, while interesting to be inside a movie set, was not what we anticipated. Hundreds of crew members, with walkie talkies, trucks, props and even giant fiberglass sharks were everywhere but where they should be. Edgartown has been renamed “Amityville” for the movie, the harbor, it’s restaurants and shops, were basically off-limits, and the nearby beach was closed while filming. Of course, Toby was loving it, but Max and I just wanted to move on.

There is a short ferry to Chappaquiddick Island which takes you to the site of the bridge where Senator Edward Kennedy had his unfortunate plunge off the bridge, but the filming had disrupted the ferry service so we did not go. We spent much of the time just watching sharks on trucks and listening to noisy walkie talkies. Despite now sunny skies, we left after a few days, and drove south, heading back to Washington.

That night we stayed at Paramus, New Jersey. Toby had a swim as soon as he arrived and then we all had a sauna and went out to dinner. We came back to Washington last Saturday 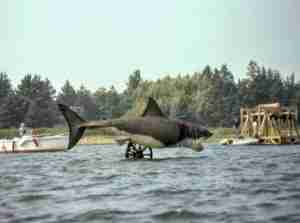 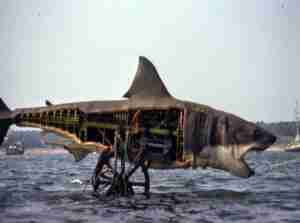 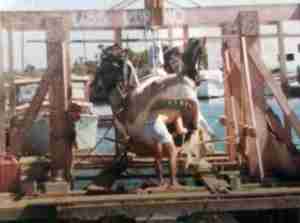 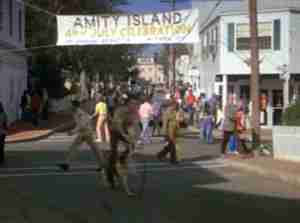 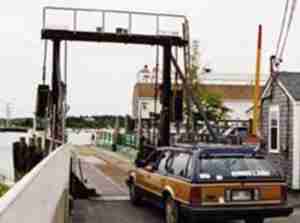 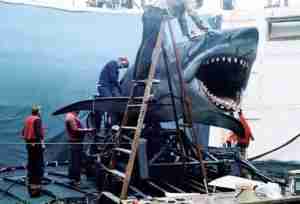 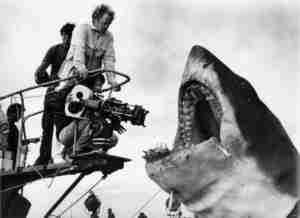 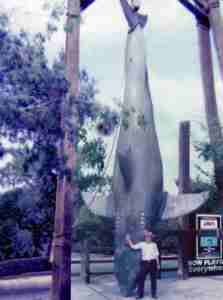 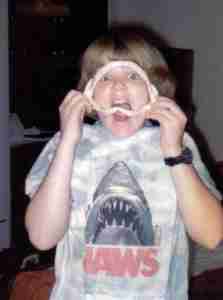 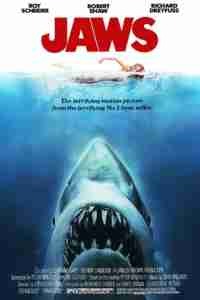 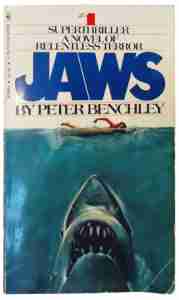 Peter Benchley’s book of JAWS was the first novel I read cover to cover, twice.