Hooray for Hypnotic Hollywood in 1975

During my fathers tenure in the USA, my Mum and I (and sometimes with Dad)  travelled extensively across the USA.  One of our more interesting trips to Los Angeles is detailed in my mothers memoirs: 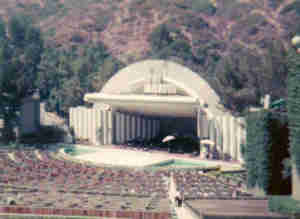 We were met at the bus station by an employee of a business colleague of Max’s, and Burt took us to the Holiday Inn in Wilshire Boulevarde, Beverley Hills, where we showered and changed. He then he took us to lunch at “Benihana”, a Japanese restaurant.

After that we did a magnificent tour of Los Angeles, drove along Sunset Boulevard and around the stars’ homes in Beverley Hills. We walked through the famous Bel Air Hotel, which is set in lovely grounds, with streams and waterfalls. (Max stayed there on a trip some years ago as a guest of the Howard Hughes organization). From there we drove down to Santa Monica and Malibu, and then back over the mountains to Hollywood. We went into the Hollywood Bowl, which is vast, and I took a picture of Toby pretending to perform on the stage. From there we visited the famous Graumann’s Chinese Theatre – it’s in the courtyard there that the stars have their hand and footprints in the concrete. It’s just off the Avenue of the Stars where big gold stars are set every few feet in the pavement with a star’s name on each.

Burt introduced us to Gary Morton, a charming and funny film producer who has worked with Dean Martin and Frank Sinatra, and was married to Lucille Ball, who took us to a lovely dinner at the Hillcrest Country Club, a Jewish club whose membership includes Jack Benny, George Burns, Groucho Marx and Danny Kaye. 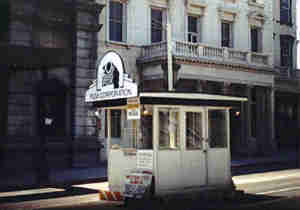 The following morning, Gary sent a limousine, with its own cocktail bar, to pick Toby and I up to set off for a private tour of the Twentieth Century-Fox film and television studios. Toby was thrilled since it was where both “M*A*S*H” and “The Poseidon Adventure” had been filmed.

We transferred to a pair of tiny electric golf carts and Gary led us on a fascinating morning around the lot visiting different film sets, including the set of New York in the 1930s used for “Hello Dolly“.

It is a vast complex, with so many buildings, each the size of aircraft hangers. The studio is like a city within a city with its own café’s, residences, administration buildings, soundproof stages, and even its own bank!

A highlight of the day was visiting a dressing room and meeting Gary’s wife, Lucille Ball, who was preparing for an upcoming TV show called “A Lucille Ball Special Starring Lucille Ball and Jackie Gleason” which Gary was producing. She clearly liked Toby, who sat on the floor at her feet, cuddling her legs! Ms. Ball was charming, and graciously giving up so much of her time to chat to us. She apologized to us that she was unable to join us for the afternoon due to her work schedule.

Toby seemed to have a great more interest in her makeup artist, and the makeup process itself. In hindsight, with Ms. Ball out of makeup and costume, I don’t think Toby connected her completely with the wonderful film “Mame”, which we had seen at Tysons Corner a couple of months earlier. 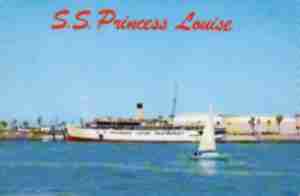 We were delivered back by limousine to our hotel in time to shower and change once more before being picked up for dinner. Arnie Semler is Max’s business associate, but he was out of town and had arranged for other members of his staff to look after us. His secretary and her husband, together with the Vice-President of the firm, Fred Simon, wife Ilse and daughter Karen took us out for dinner. Fred and Ilse are in the process of moving to Los Angeles from New York, so everything was new to them too. We drove down to San Pedro, not far from Long Beach, and had an excellent dinner on board a ship, the “SS Princess Louise”. After that we visited Port O’ Call, which is a shipping area of two streets with olde worlde type small boutiques placed higgledy-piggledy – a most attractive area and quaint. I was sorry we couldn’t visit it again in the daytime when the shops were open. We didn’t get back to bed until 1.30 a.m. and Toby had been asleep for hours on the back seat!

We slept late the following morning, and Max arrived about 11 a.m. having been in San Diego on duty for the previous two days. Arnie met him at the airport and brought him to the hotel, where he had a quick change, and we took off again with Arnie for the Sportsmen’s Lodge Hotel, where we picked up the Simons. We then had lunch at the “Tail o’ the Cock”. Both this restaurant and the Sportsmen’s Lodge are favourite haunts of the stars.

Max, who was now jealous of our tour of Twentieth Century Fox Studio tour yesterday, now wanted to visit a film studio also. So, after lunch we went on to Universal City where Valerie, another member of Arnie’s staff, had kindly organized a private VIP tour for Max, Toby and I. It was another most interesting tour and we really saw what goes on behind the scenes in film making – I now find myself analysing films on TV and working out how the effects are created! 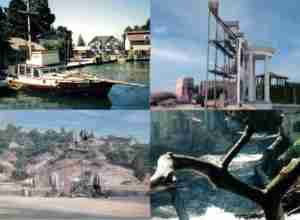 Max took the part of a trolley bus driver in a short film making session, and the tour bus went through the “Red Sea” – as we drove into the lake the waters parted a la film “The Ten Commandments“, but the waves were only about 6” high!!  We then saw the “Orca” boat from “Jaws“, the home from “Leave it to Beaver“, the shell of a White House and the house from “Psycho“.  We also saw a flash flood with trees collapsing, and huge boulders come crashing down (made of foam).  We were lucky to be there for hours and could have stayed many more hours, but we had to race back and change for dinner.

We went to Arnie’s house for drinks first and met Blessing, his wife. Their house is quite something and has been used for sequences in various films, including a recent segment of “Barnaby Jones“. The garden is Japanese style and there’s an enormous heated pool. We had dinner at the Sportsmen’s Lodge, whilst Toby was taken to the pictures by Arnie’s daughter and her children.

The next morning we were up bright and early to drive to Newport Beach to visit Arnie’s son Ronnie and daughter-in-law Jennifer. We had lunch at the classy Balboa Bay Club – John Wayne is on the board and the committee members read like a “Who’s Who”. Ex-President Nixon is also a member. It happened to be Max’s Birthday and somewhere along the line the Semlers had discovered this, so Blessing had brought a cake down from L.A. and this was produced with a flourish at the end of the lunch. The waiters – and all of us of course – sang “Happy Birthday”, and it reminded me of Farrells, but the surroundings were so very different!!! 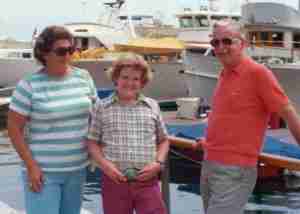 After lunch we all went out on Ronnie’s yacht and cruised around the bay for a few hours. We passed the biggest ocean-going yachts I’ve ever seen – quite fantastic. The bay was very busy and we passed very close to John Wayne (from whom Toby was thrilled to get a wave) and Buddy Ebsen on their boats, and saw Roy Rogers on the terrace of his house. Some of the houses were magnificent – Betty Hutton has a lovely one on a point.

After all this heady stuff we drove back to L.A. in time to meet Tim’s plane. He had had a wonderful two days in Honolulu en route and looked very fit. Max picked up our hire car from Avis at the airport, and we drove back to our hotel to change. Arnie had made bookings for dinner at “Scandia”, the “in” place in Beverley Hills at present, but he realized that we didn’t want to leave Tim as soon as he arrived, so he very kindly changed the plans to include the boys, and we all went to “Little Mexico” instead, an area of two streets, which is just like Mexico. We wandered around the shops and then had dinner at a Mexican restaurant, where we did the Mexican Hat Dance with members of the floor show. We were all given maracas to help with the entertainment!!