Hongbao (红包), literally “red envelopes,” are traditional gifts of money that are given during Chinese New Year and other special occasions – either digitally (preferred over WeChat) or in physical cash form.

According to Chinese folklore, hongbao, which are colored a lucky red, are supposed to protect children from a monster named Sui, which places its hands on the foreheads of sleeping children on Chinese New Year’s Eve in order to make them sick. According to the story, the only way for people to scare the monster away was to wrap a coin in red paper and place it on their child’s pillow.

Over time, this evolved into the practice seen today, in which children (and almost everyone else with a smartphone) are given red envelopes containing money, and further spread to encompass other dates such as birthdays, graduation dinners, being accepted into university, weddings and other events, instead of gifts.

Where a hongbao is expected…

* generally only if they are younger than you and you are regularly utilizing their services at least twice a month, and they are very good to you.

On these occasions, you should give them hongbao only if you are invited to the birthday, wedding or dinner. If they don’t invite you, you can keep the money.  Of course, those are the ‘official’ rules. 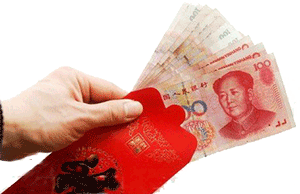 It’s tradition to put crisp, new bills inside. Giving dirty or wrinkled bills is in bad taste. In the week leading up to Chinese New Year, many people stand in long queues at banks to exchange old bills for new ones.

The amount of hongbao you are expected to give varies from place to place and also depends on how close you are to the people in question. There are no set rules. It depends on the nature and closeness of your relationship—the closer you are, the more money you would give (within your financial ability).

But there are some exceptions. To somebody with whom you are very close (a younger boyfriend or girlfriend for example, or an older co-worker), you might choose to give a gift rather than a hongbao because money cannot represent wishes anymore.

It’s also common practice sending multiple very small digital (shared) Hongbao in WeChat groups that you are in, particularly if you appear to be wealthier than most.  Often sending RMB 8.88 shared by 8 people, of RMB 88 shared by 18 people etc…)   Always remember to thank the person if you receive red packets in such a group, even if it’s just 1 jiao. (it’s the thought that counts)

SHOW YOUR APPRECIATION VIA HONGBAO 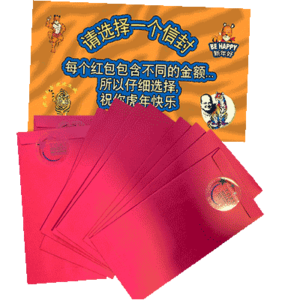 Tipping is not popular in China and is officially discouraged.

However, as a foreigner, instead of tips, if you eat regularly in a local restaurant or drink in a local bar, consider give some Hongbao to your regular wait staff (and chef’s / busboys / cleaners / doorman and manager) at Lunar New Year (CNY) or before you leave China.

You will be amazed at how appreciative the recipients will be.