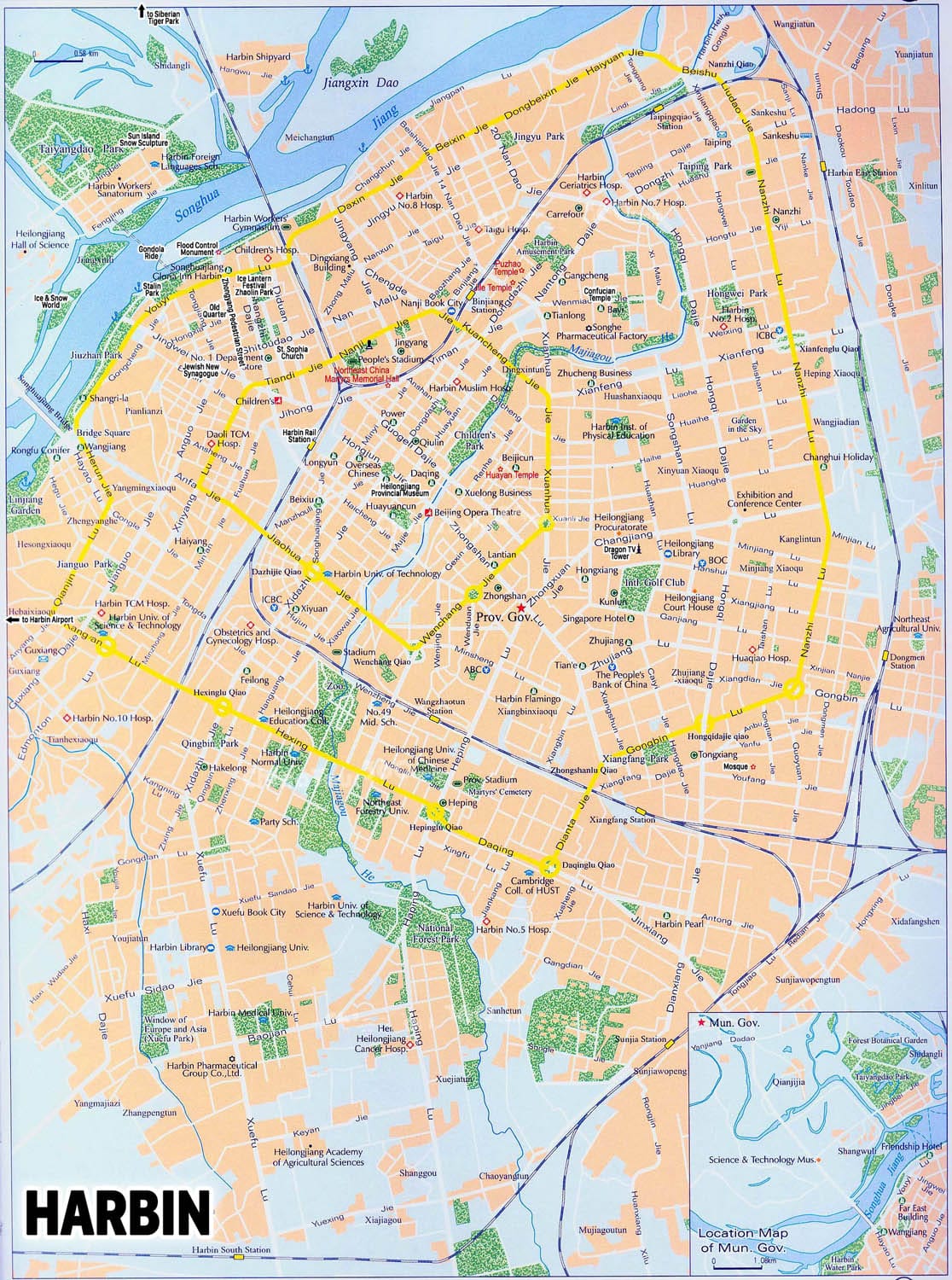 Harbin (哈尔滨) (also seen as Ha’rbin or Haerbin) is the capital of Heilongjiang Province in Northeast China. Harbin hosts the Snow and Ice Festivals each winter. Historically, the city has had a lot of Russian influence, in particular after the Russian Civil War of 1918, when White (Monarchist) refugees escaped the newly formed Soviet Union. The influence remains clearly visible in the building styles and foods. The city was founded in 1897 as a camp for Russian engineers surveying the Trans-Siberian Railway. Labor demands brought in a collection of outcasts from across Russia, Poland and even from within Manchuria. The city eventually was captured by the Japanese during World War II and later captured by the Chinese in 1946. Once nothing more than a Russian-built outpost of the railway, Harbin has managed to become a major player in her own right as well as capital of Heilongjiang Province.

Northeastern China was originally built up as an industrial center using pre-existing Soviet and Japanese factories. By the 1980s these outdated and inefficient factories could not keep up. In November 2005 there was a major benzyne chemical pollution spill on the Songhua river stretching over 80 km and reached China–Russia border, leading to a shutdown of Harbin’s water supply for months, forcing donations of bottled water to be trucked into Harbin from all over China (we donated 800 large bottles of water).

Harbin is infamous for its very cold winters — it is at the same latitude as Montreal, and winter temperatures as low as -38°C (-36°F) with a few weeks reaching low 30s, while parts of winter averages a chilly -17°C (°1F) have been recorded. Bring more clothes than you will think you will need so that you can layer.  The winter can become dreary if you are a long-term resident, as the entire city uses coal for heat the air quality rapidly decreases during these months.

Harbin can be a great place to visit in the summer. The weather is cool and it seems to be perpetually breezy, and most of Harbin’s streets are lined with trees. Because the city is so cold all winter, life almost explodes and people crowd the streets until late at night eating kabobs, playing poker, and drinking Hapi (Harbin Beer). This is a great escape from the heat of Beijing. A trip up to the border regions this time of year would be nice as well. 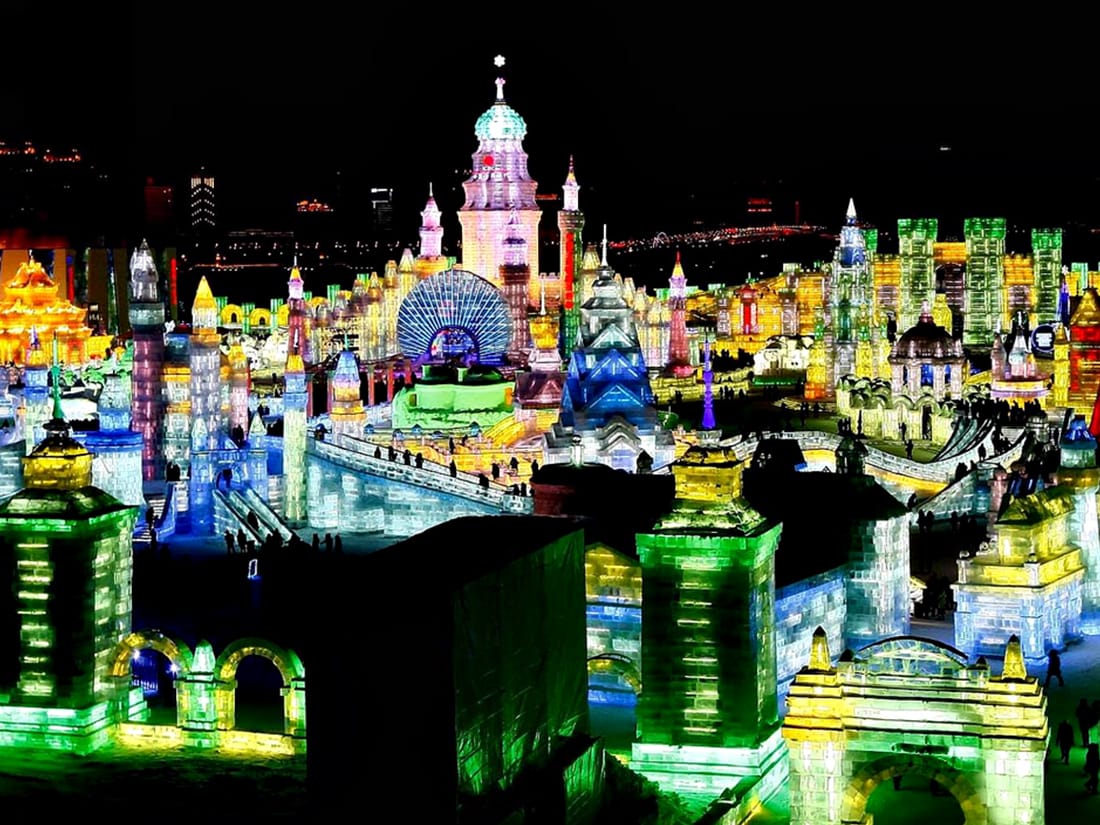 Harbin International Ice and Snow Sculpture Festival (冰雪大世界) By far Harbin’s biggest claim to fame is famous for massive and beautifully carved sculptures of snow while the latter is famous for large ice buildings and statues constructed with lights inside that make them glow. January 5th, lasts from until about end of February when warm weather melts the ice (exact dates vary). These two-month-long events cover Chinese Spring Festival and Lantern Festival within the duration. While smaller ice and snow lanterns can be found all over the city, there are 3 major sites with large scale lanterns being displayed:

International Beer Festival (哈尔滨国际啤酒节). Held in late August of every year, a whole public square is cordoned off and there are stages that host music concerts, dance contests. Most of the beer drunk is the local Harbin brew, but there is a tent for international beers. .

Summer Music Festival (哈尔滨之夏音乐节). Held every two years in July, this festival is organized by the city and brings in Chinese bands for free concerts held in the city square.

Imported Russian goods of all types and qualities are available around town. Look out for vodka, Russian dolls, and chocolate. Beyond this, the shopping is much like any other city in China. 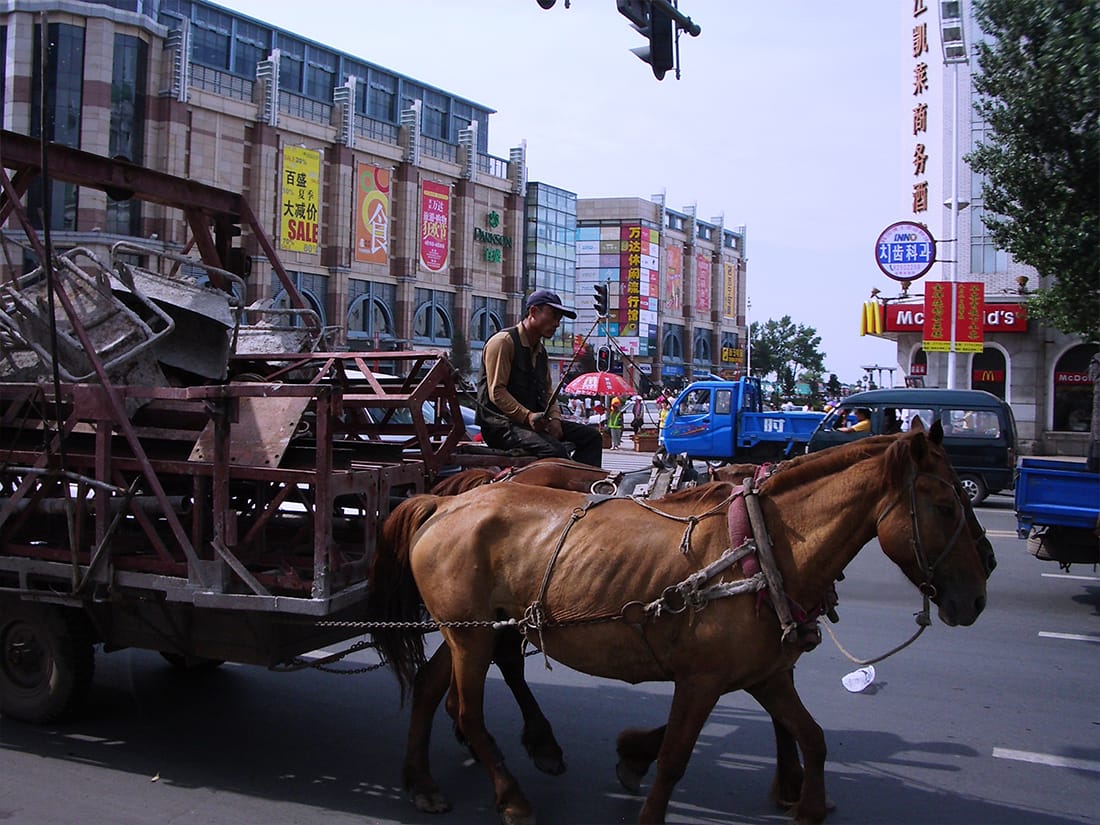 Zhongyang Pedestrian Street (中央大街) is the main shopping district where there is a Wal-Mart near the flood control monument and another shopping district along Guogeli Jie where you can find clothing, food and more. Along this street are huge new shopping malls such as the Euro Plaza, Parksons, and Lane Crawford that carry international brands and are expensive. There are Nike stores, KFC and interesting Russian thrift stores. The street is lined with beer gardens during the summer.

Guogeli Dajie (果戈里大街). Harbin’s second biggest shopping district after Zhongyang Dajie (bigger in size). The area around here is dotted with Russian buildings and HUGE shopping complexes. At night there are numerous night markets, a small scale Russian church where people dance, and a small and lively “bar lake.” 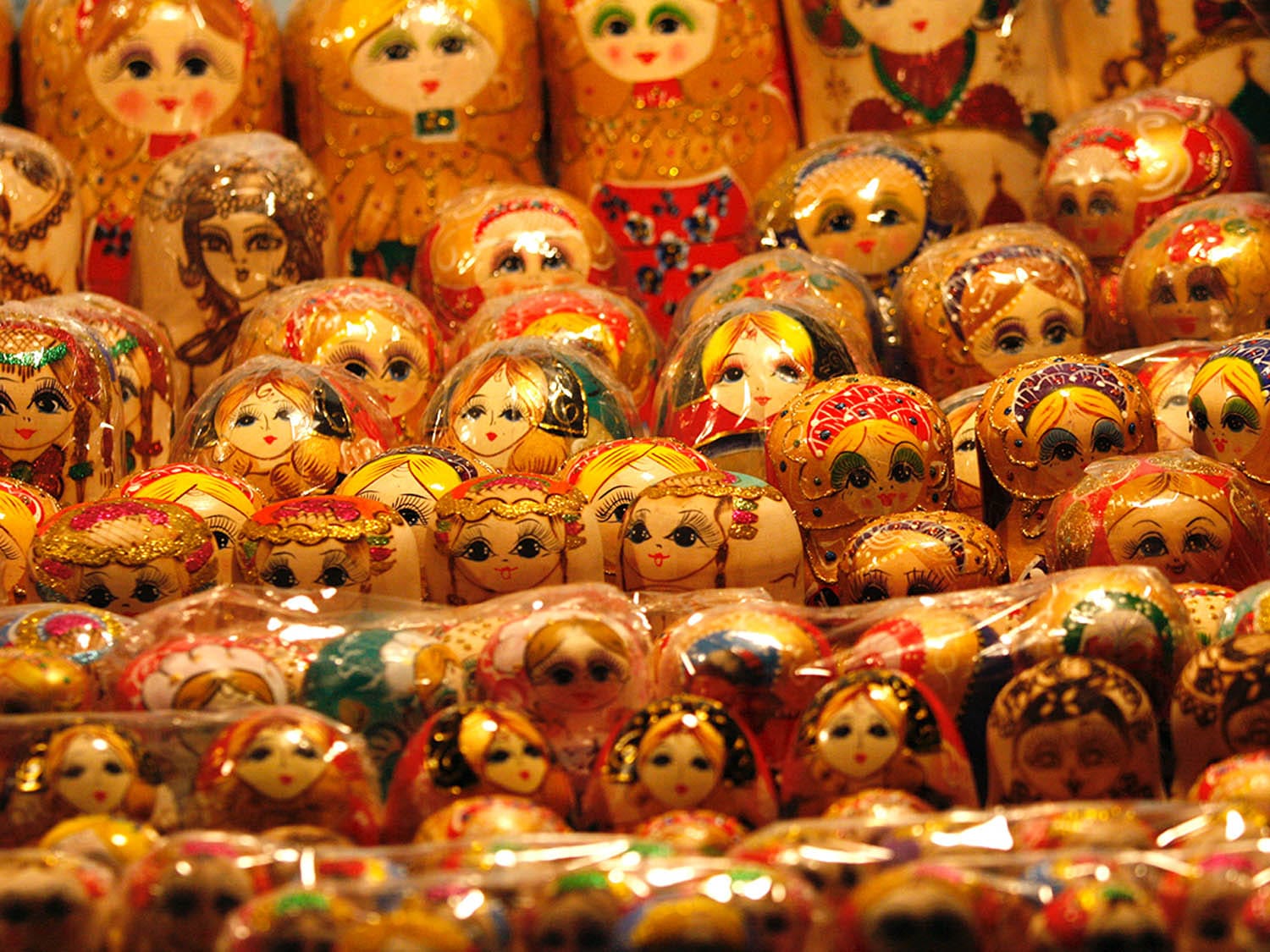 Indian Street (印度一条街). A commercial side street located right off Guogeli Dajie. If you’re facing the East, it’s past the giant castle and on your right. Used to be complete with Indian thrift stores, clothing, and food, but now offers only Russian items, including dolls, pocketknives and toys. But don’t expect any Indian restaurants as there aren’t any yet.

The Hongbo Shichang, at the intersection of Dong Dazhi Jie and Hongjun Jie, is an enormous underground shopping centers — if they don’t have it, you don’t need it. 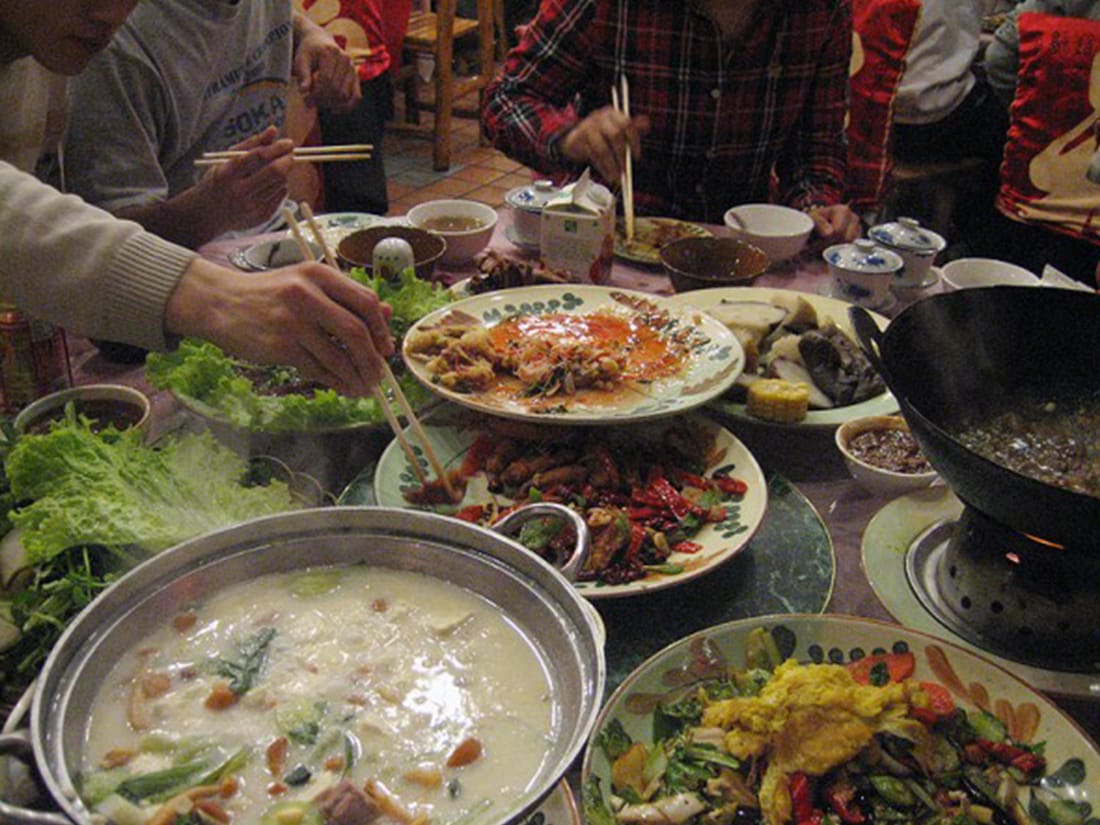 If there is one thing special about Harbin, it has to be the food. Taking influences from Russia, Mongolia, Korea and of course China, the food in Harbin is much “heartier” than you can find anywhere in China, and stews and other duncai are popular dishes. Because the winters are long here you’ll find less exotic ingredients and heavy use of vegetables like cabbage, potatoes, cucumber and corn.

Chinese BBQ or shaokao and Hot Pot is also popular in Harbin.

One thing you will notice is that Dongbei people love to eat, and its not just for the food, but more importantly for the social gathering of getting all their friends together at one table and drinking/eating the night away. Thus this city is dominated by restaurants with large tables that seat groups of people.

In Harbin, liveliness (renao) attracts customers and much as the food; some restaurants are so loud you may need earplugs!

English is spoken less commonly in Harbin than in China’s other cities.

In winter, streets can get slippery and it’s not uncommon to see parts of sidewalks covered in ice. So never hurry when you walk, and be very careful when using outdoors steps, such as on footbridges and when getting on and off buses.

Avoid fish caught in the Songhua River as it was contaminated by benzyne in November 2005.

Avoid going into massage or KTV alone, as you may end up being forced to pay for a bill you didn’t order. If you choose to go, be mindful of what you are getting into. People not interested in a “massage” with happy ending should NOT massage or KTV  in Harbin.

You can get disposable personal heating pads in some stores. Try to get some of these if you are going to spend more than a few hours outside. Most patches will last between 4 and 6 hours. Wear them under the clothes.

Many Taxi drivers are reckless—running red lights, driving into oncoming traffic, etc.  Most taxi drivers do not speak any English or read Pinyin, so unless you speak fluent Mandarin Chinese showing them the Chinese characters for your destination is often the only option that will work.

Do not be surprised if the taxi stops to pick up other passengers during rush hour, and if you are picked up by a taxi with passengers, even if the meter reads RMB 15 when you get in, the taxi driver will still expect you to pay the full amount on the meter when you depart the taxi.

Avoid the Fake Black taxis as these are not really taxi’s, but rather are rented cars. They are distinguished by a generic roof sign “泰克斯” (Tàikè sī = Taxi) and non-working telephone numbers on the doors of the ‘taxi’.

Harbin Taiping International Airport (哈尔滨太平国际机场) is located 37 km from the city centre near the town of Taiping. The airport is small, and old.  A taxi to downtown costs ~ RMB 100-130. Always negotiate this price in advance.