Gift-giving was previously against the law but is now generally expected.  It is very likely that you will meet new friends, and you will want to exchange gifts.

Traditionally, you might be prepared to exchange a modest gift with your colleagues at the first meeting.   It is important to know that giving someone gifts should not be a one-way business. Courtesy requires reciprocity. The person who receives the gift should find a chance in the future to return the same favor by returning a gift of similar value the next time you meet. You can do so simply by either paying a visit with a similar value gift or by inviting the friend out for a meal with you paying the meal. Don’t do it right on the next day because it may appear awkward.

Be aware of the many superstitions associated with particular gifts.

Avoid giving gifts of great value. Only after all business dealings are completed is it appropriate to exchange a gift of value. Give a group gift from your company to the host company. Present this gift to the leader of the group. Always give a gift to each member of the Chinese delegation that meets you in the order in which they were introduced.

Great care should be taken in regard to the color of the gift-wrapping. Chinese culture is very sensitive to colors. Thus for example, a white or black wrapping symbolizes death. Red is the preferred color as this symbolizes luck. Good advice is to ask the hotel staff, or the assistants in the store to wrap the gifts that you want to distribute. In any case, gifts that are wrapped in advance, before you arrive in China, may be opened by the customs authorities.

If you should receive a gift, you should accept it with both hands, spend some time looking at it with great interest (preferably excitement), and then graciously thank the giver. (at this time, I am additionally thinking about what can give back to him in the coming weeks of similar value). 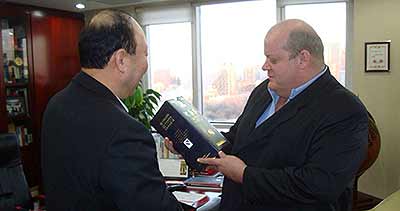 It is recommended that you prepare a sufficient number of personal gifts in advance of your arrival in China, preferably handy-work or some small object that symbolizes the country from which you have come.

For friends, a carefully picked present shows that you are thoughtful and considerate; things they like or things that they will find practical are good choices, just like in other countries. don’t consider it rude when the receiver of your gift searches online for it’s price, since they just want to buy you a gift of equal value next time.

For colleagues and bosses, follow your other colleagues’ lead. Usually people are not expected to give birthday presents to the people at their work – unless, of course, they are close friends. Despite this, there are some offices that do take part in this practise as a matter of course, in which case just do as everyone else does. This is particularly true when it comes to giving gifts to your boss – if it’s not something that everyone does, then you might want to avoid doing it yourself.

There is a rapidly growing trend in the more commercial cities like Shanghai, where sadly a HongBao is becoming the preferred gift of the younger generation.

If people are buying things for your birthday, you can buy them dinner in return. It is not a must, but it is a way of thanking them for your present, or even just remembering your birthday.

There is no need to give birthday presents to everyone you know. A WeChat message may be enough for some acquaintances. Give a present if you want the person to be happy, rather than be burdened with the need to return the favor.

Read more about the many superstitions associated with particular gifts.