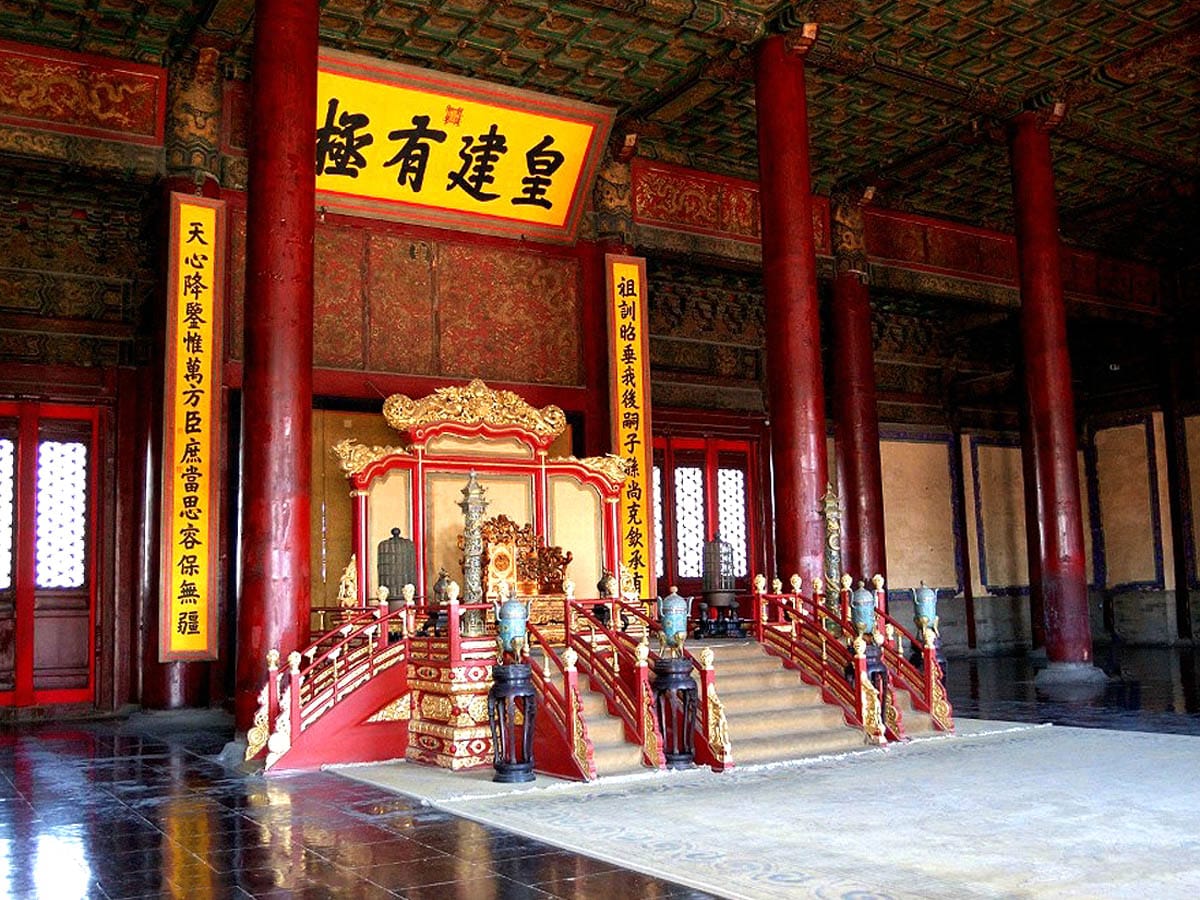 The Forbidden City (紫禁城) is a large precinct of red walls and yellow glazed roof tiles located in the heart of Beijing surrounded by a moat, and a 10m high red wall with watch towers on each corner. Measuring 961 meters in length and 753 meters in width, the Forbidden City is composed of more than 90 palace compounds with over 800 buildings & 9999.5 rooms (because only heaven could have 10,000 rooms).

The Forbidden City was the political and ritual center of China for over 500 years. After its completion in 1420, the Forbidden City was home to 24 emperors, their families and servants during the Ming (1368–1644) and the Qing (1644–1911) dynasties. The last occupant (who was also the last emperor of imperial China), Puyi (1906–67), was expelled in 1925 when the precinct was transformed into the Palace Museum. Although it is no longer an imperial precinct, it remains one of the most important cultural heritage sites and the most visited museum in the People’s Republic of China, with an average of 80,000 visitors every day.

The Forbidden City (translation is one of the Chinese terms for it – Zījĭncheng) was so named because commoners were forbidden to enter the city. Any commoner who saw the emperor was killed.  The Forbidden City is also referred to as 故宫 – Gugong. 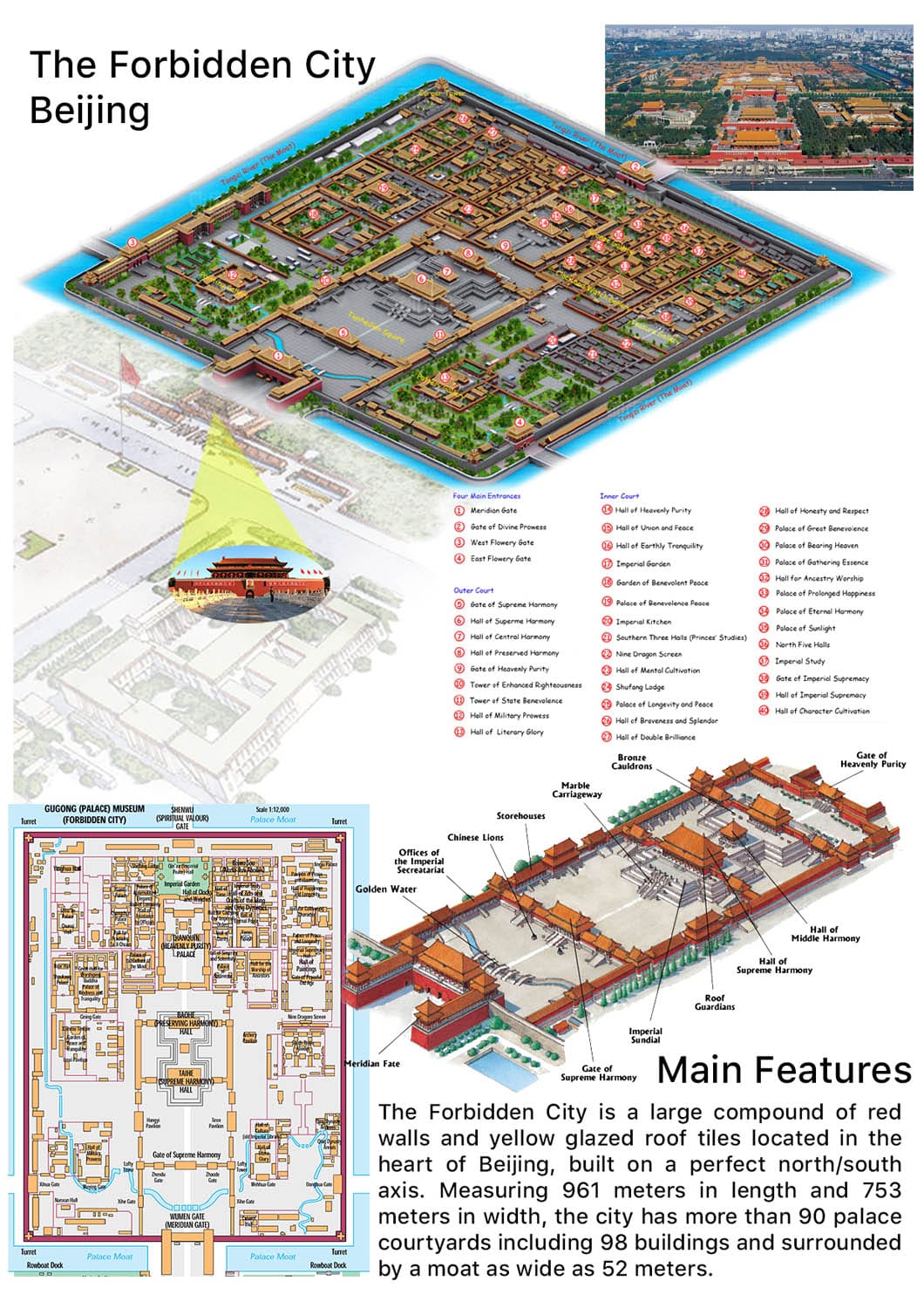 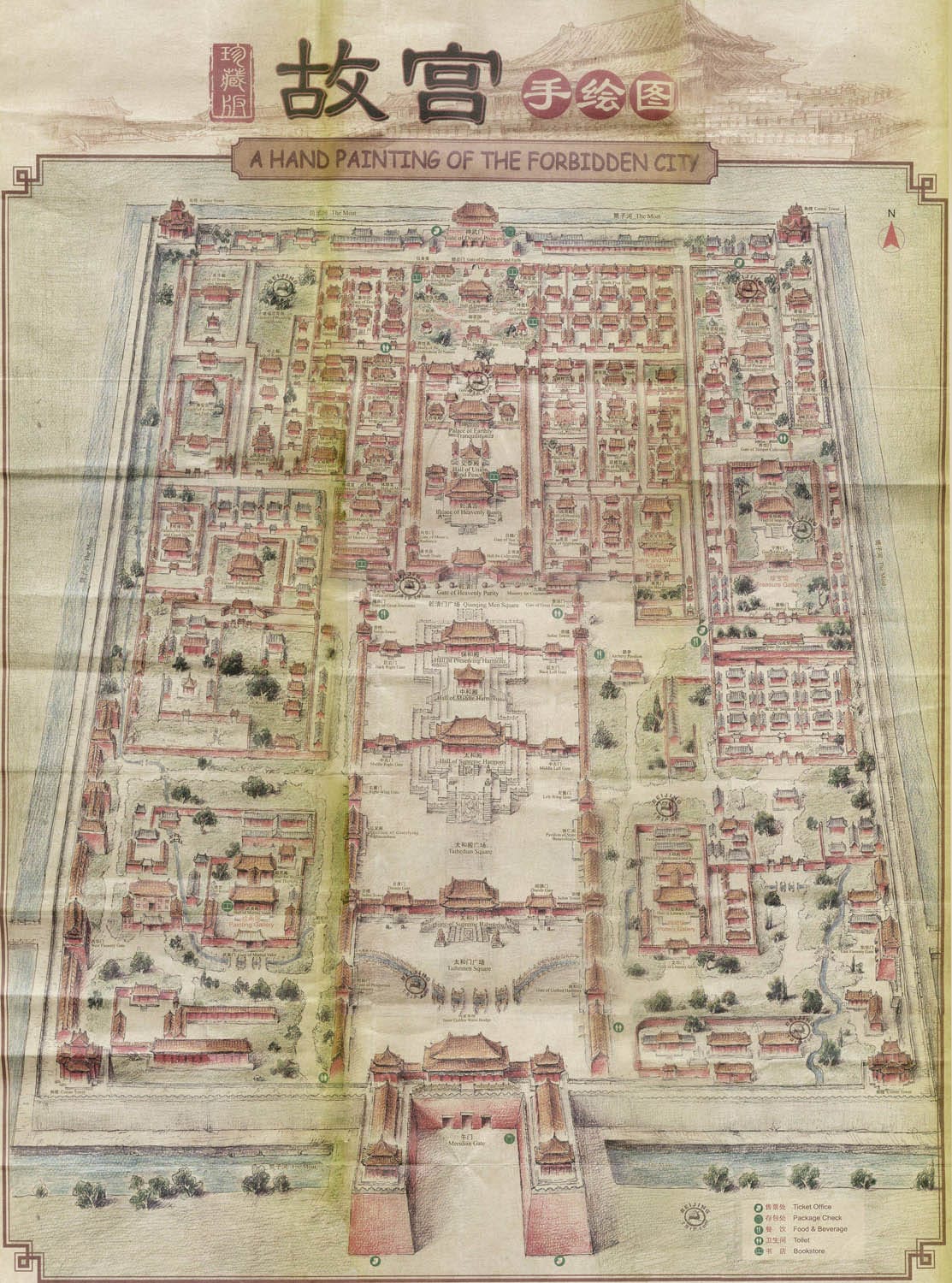 Construction of the Palace began around 1407, during the reign of Yongle, the third Emperor of the Ming dynasty. It is thought that up to a million workers may have been coerced into working on the palace’s construction.  The palace was burnt to the ground when the Manchus stormed it in 1644.  The palace is symmetrical in layout and the main halls and gates of the Forbidden City lie on a North-South axis which runs all the way across Beijing to Yongdingmen in the South, and Zhonggulou in the North.  Since the Forbidden City is a ceremonial, ritual and living space, the architects who designed its layout followed the ideal cosmic order in Confucian ideology that had held Chinese social structure together for centuries. This layout ensured that all activities within this micro-city were conducted in the manner appropriate to the participants’ social and familial roles. Similarly, the court determined the occupants of the Forbidden City strictly according to their positions in the imperial family. The architectural style also reflects a sense of hierarchy with particular designs for buildings of different ranks in Chinese social structure.

Public and domestic spheres are clearly divided in the Forbidden City. The southern half, or the outer court, contains spectacular palace compounds of supra-human scale. This outer court belonged to the realm of state affairs, and only men had access to its spaces. It included the emperor’s formal reception halls, places for religious rituals and state ceremonies, and also the Meridian Gate (Wumen) located at the south end of the central axis that served as the main entrance. 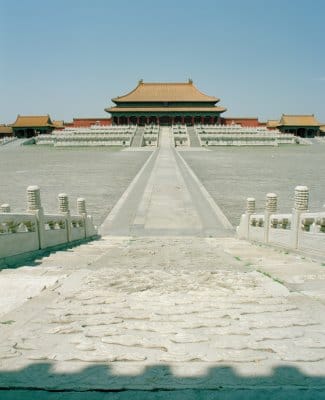 The main entrance to the palace is through the South Gate, known as the Meridian Gate (午门 Wu Men), so named because the emperors believed they were at the centre of the universe – on the meridian.  Since the Ming dynasty, officials gathered in front of the Meridian Gate before 3 a.m., waiting for the emperor’s reception to start at 5 a.m.

Beyond this are two more halls of the outer court, The Hall of Central Harmony, which served as a study for the Emperor, and the Hall of Preserving Harmony, which had various functions over the years, from the location for official banquets to an Emperor’s walk-in wardrobe.

While the outer court is reserved for men, the inner court is the domestic space, the exclusive domain of the Emperor, his concubines, and the eunuchs who served and advised them. The inner court includes the palaces in the northern part of the Forbidden City. 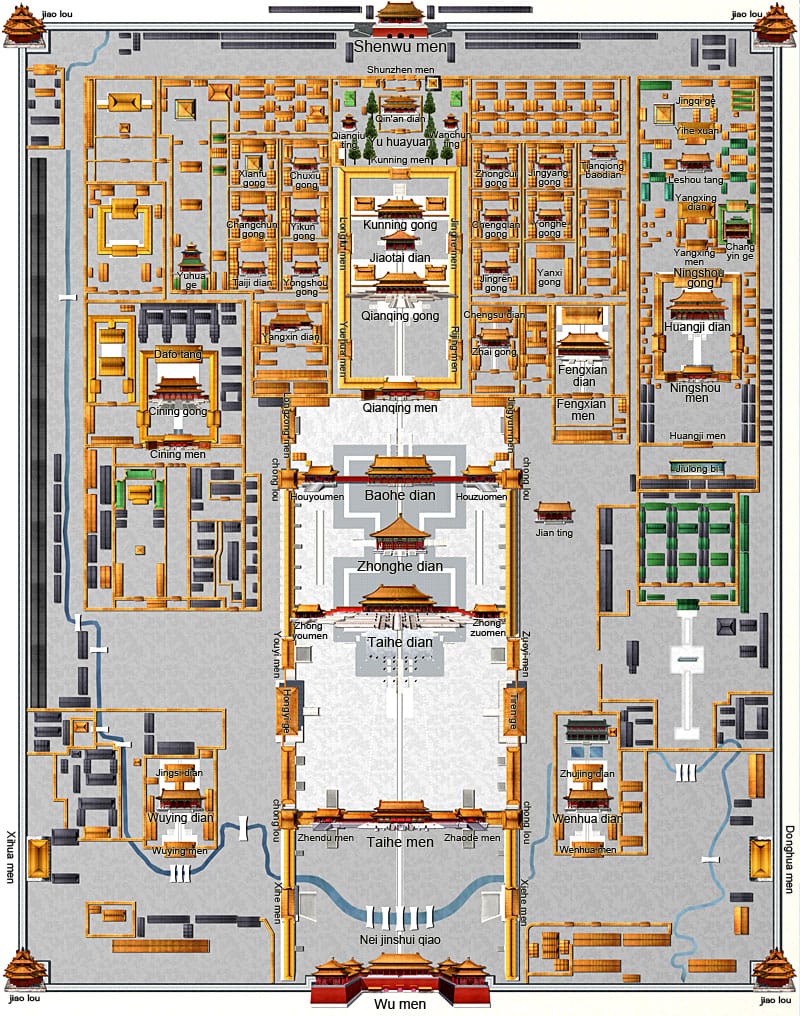 Here, 3 of the most important palaces align with the city’s central north south axis: the emperor’s residence known as the Palace of Heavenly Purity (Qianqinggong) the Emperor’s sleeping quarters, is located to the south while the empress’s residence, the Palace of Earthly Tranquility (Kunninggong), is to the north. The Hall of Celestial and Terrestrial Union (Jiaotaidian) — the name is a metaphor for the union of the Emperor and his Empress, and the hall was used by the Empress for official engagements.  A smaller square building for imperial weddings and familial ceremonies, is sandwiched in between.

Although the Palace of Heavenly Purity was a grand palace building symbolizing the emperor’s supreme status, it was too large for conducting private activities comfortably. Therefore, after the early 18th century Qing emperor, Yongzheng, moved his residence to the smaller Hall of Mental Cultivation (Yangxindian) to the west of the main axis, the Palace of Heavenly Purity became a space for ceremonial use and all subsequent emperors resided in the Hall of Mental Cultivation.

The residences of the emperor’s consorts flank the three major palaces in the inner court. Each side contains 6 identical, walled palace compounds, forming the shape of K’un “☷,” one of the eight trigrams of ancient Chinese philosophy. It is the symbol of mother and earth, and thus is a metaphor for the proper feminine roles the occupants of these palaces should play. Such architectural and philosophical symmetry, however, fundamentally changed when the empress dowager Cixi (1835-1908) renovated the Palace of Eternal Spring (Changchungong) and the Palace of Gathered Elegance (Chuxiugong) in the west part of the inner court for her 40th and 50th birthday in 1874 and 1884, respectively transforming the original 6 palace compounds into 4.

The eastern and western sides of the inner court were reserved for the retired emperor and empress dowager. The emperor Qianlong (r. 1735–96) built his post-retirement palace, the Hall of Pleasant Longevity (Leshoutang), in the northeast corner of the Forbidden City. It was the last major construction in the imperial precinct. In addition to these palace compounds for the older generation, there are also structures for the imperial family’s religious activities in the east and west sides of the inner court, such as Buddhist and Daoist temples built during the Ming dynasty. The Manchus preserved most of these structures but also added spaces for their own shamanic beliefs.

Behind the Palace of Earthly Tranquility is the Imperial Garden. It was built up in 1420 and remains unchanged in its original layout. The garden with an area of about 1.2 hectares (2.97 acres) has more than twenty structures distributed symmetrically but not prudishly.  The garden centers Hall of Imperial Peace, with other buildings framed by a background of old trees. Surrounding the Hall of Imperial Peace, 4 pavilions are of a great originality in their styles and are named after 4 seasons of a year. The steep rockery with a chic pavilion on in the north was where the emperor and empress climbed up to view the distance on the lunar September 9th. Even the paths convey a distinct flavor, paved with pebbles with different colors, forming a variety of designs portraying people, flowers, scenery or stories.

The North gate is called Shenwumen, which means ‘The Gate of Divine Might‘ (神武门 Shenwu Men).

Today, the Forbidden City is still changing. As a modern museum and an historical site, the museum strikes a balance by maintaining the structures and restoring the interiors of the palace compounds, and in certain instances transforming minor palace buildings and hallways into exhibition galleries for the exquisite artwork of the imperial collections.

A vast majority of the Forbidden City is not accessible to the public, as much as 60%.  These areas are still being restored, or deemed to sensitive for public access. 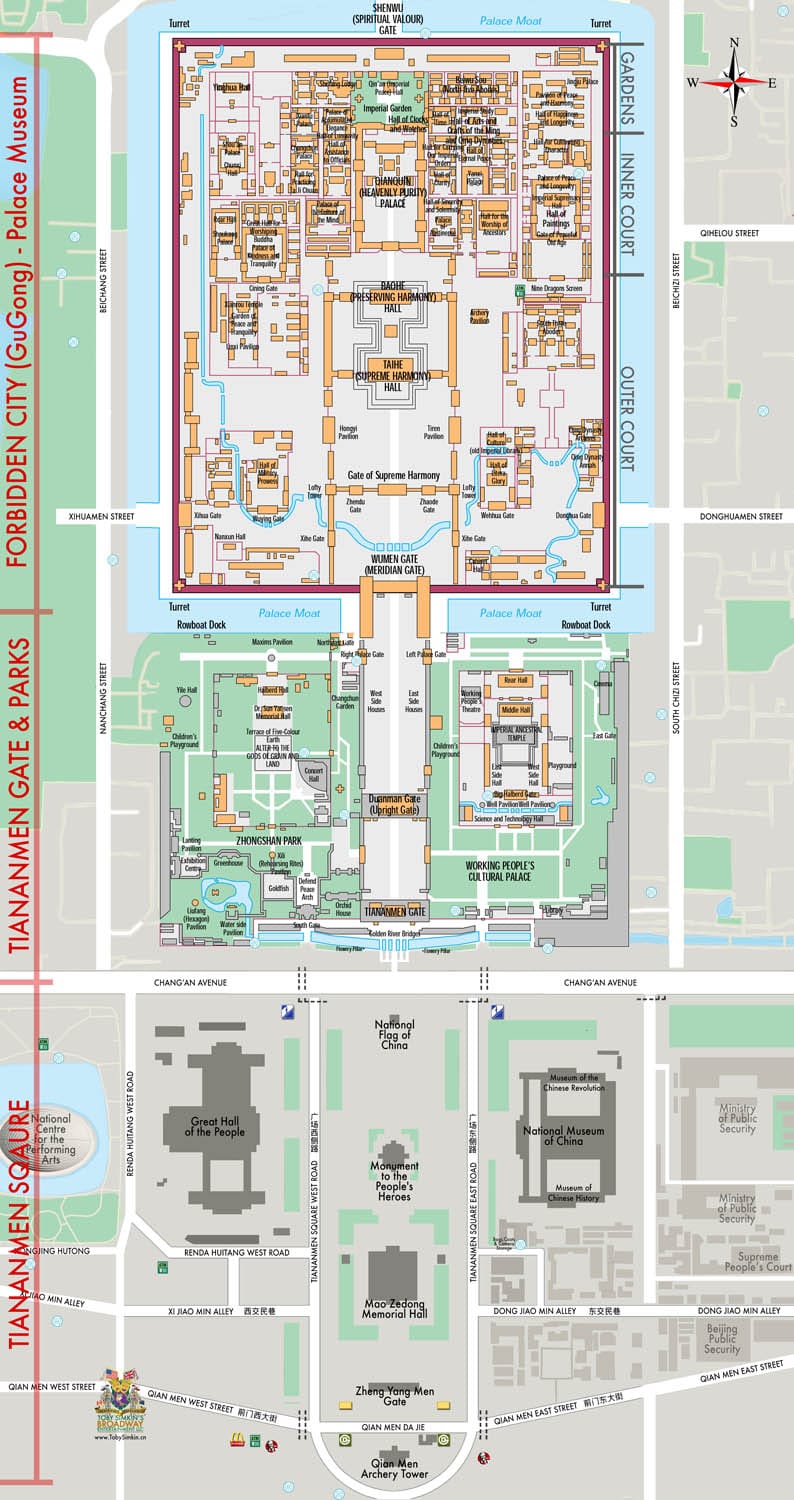 Admission:  between RMB 40 and 60 depending on season, age and citizenship.

❗The Forbidden City only allows 80,000 visitors a day. Many tickets will be reserved by tour groups & Chinese, so there are usually only ~ 20,000 tickets available for last minute sale. Try to arrive early morning to buy your tickets as early as possible, especially during holidays.

‼Real-name policy is in effect for tickets. You must show passports (for 2nd generation ID cards for Chinese).

??Allow at least 2-3 hours to walk the grounds from south to north of the major sights on the central axis. For a more in-depth tour of the Forbidden City, including stopping and walking a few of the museums on the outer perimeters of the outer court, allow 5-7 hours.

??Suggest starting with Tiananmen Square first, then walk north through Tiananmen Gate (where the portrait of Mao ZeDong is hanging), get your Forbidden City tickets at the box office on the west side outside the Meridian Gate, then enter the city.

Photography:
Photography is permitted for private, non-commercial use outdoors throughout the Forbidden City, except for sites or areas with “No Photography” signs.
Photographs is NOT permitted inside halls with original interior decor either on the central axis or the west.
Tripods, monopods and flash are prohibited in both special and permanent exhibitions.
Works of art on loan from other institutions, domestic and abroad, may not be photographed.
Photography is prohibited in some of the gift shops as indicated.