Chinese food is famous all over the world, but you may be shocked by its surprising range and variety of ingredients that you will not have seen in Chinese restaurants overseas. Chinese cuisine has countless dishes, and in a banquet often dishes are chosen based on history, cooking features, climate, resources, life styles, geographical origin, color and other surprising factors, rather than taste.  The Chinese eat everything with four legs, except the tables, and everything that flies, except the airplanes.

The best way to eat good & cheaply – eat at places which look busy and clean, stick to fresh, thoroughly cooked food, and you’ll have fewer problems.

Beware of food that has been precooked and kept warm for several hours. Shellfish is a potential Hepatitis A risk in China, and best avoided if not thoroughly cooked.  Be suspect of all sushi in China.  Hard shelled fruit should be avoided (often injected with tap water as it grows to make it heaver for sale) unless in a 4/5 star restaurant or hotel.   Fresh soft shelled fruit you’ve peeled yourself is generally safe; other uncooked foods may have been washed in unclean water.  The other thing to watch for is dirty chopsticks, though many restaurants provide disposable sets: if you want to be really sure, bring your own pair. 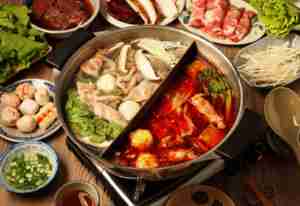 Hot pot is a kind of fondue, except they use a clear soup broth that is boiling hot. You use your chopsticks to plunge a paper-thin piece of meat or vegetable into the hot, boiling soup. The trays of meat (chicken, pork, beef, lamb, etc.) are stacked high. The meat is rolled into thin rolls. It cooks within just a few seconds.

Bakeries are in general quite good, though the Chinese variety of cakes is just a farce: behind the many different cakes there are only a few kinds of dough, and the variation is not so much in taste as it is in appearance. “Real cakes” are not available, cakes consist out of cream and very soft biscuit. Special Chinese cookies you should try is the Laopobing (“Wife cookie”) and Laogongbing (“Husband cookie”).

Vegetable flavor ice creams. This is considered normal (and tasty!). Purple Yam is good. Also, you can try green pea flavor. The ice creams are only slightly sweet, so it takes some adjustment. Chinese cuisine often uses red beans and green beans to flavor dessert items.

International fast food.  At one time considered 5-star foreign dining in China, McDonald’s has over 1000 restaurants in China, followed closely by KFC. As a rule of thumb, whenever there is a McDonalds, a KFC is no more far away than 100m. There are also a fair number of Pizza Huts.

Korean restaurants are also very common. A frequent meal is the grill-it-yourself barbeque, including beef, chicken, and seafood items as well as some vegetables including greens and potatoes.

Vegan / Vegetarians be warned.  Vegetarianism is only practiced by a relatively tiny fraction of the population — mostly expats.  Chinese people generally do not understand neither the concept of veganism nor vegetarianism — particularly outside of Shanghai.  Pick 4/5 star restaurants (best in 4/5 star hotels) with an emphasis on vegetables will help.  Avoid cooked dishes, since they are typically using a fish, chicken or beef stock as its base.  Try to stick to plain noodles, white rice, tofu, and boiled vegetables (uncooked vegetables may be unclean due to tap water issues).   Focus on dishes of tofu (soft or dried bean curd), nuts and mushrooms.  Although it is hard to find vegetarian food in China on a menu if you bring along a Chinese speaker they can help explain.  Your Chinese translator needs to be very  clear and specific when telling the waiter what you don’t eat, as their understanding of vegetarian dishes will not be the same as yours. For example they may think you only don’t eat meat but things like eggs or honey are okay.  Buddhists are sometimes vegetarian or vegan.  If you find a temple in the city you are in, there’s a chance there may be vegetarians there (especially monks) — have your translator ask them for advise on where to eat.

Useful Phrases to Help You Order:

For your stay in China, you should have at least once tried the Lamb meat sticks (Yang Rou Chuan), which are barbecued sticks of lamb meat. They are sold on the street out of small street grills by local chefs.  Often, the worst looking grills offer the best taste, so be brave and try them a few days before you leave.  BUT, be aware of the dangers initially of eating street food and drinking water.  It’s very, very common for foreigners to get very sick easily in China by not being careful and prudent in what they eat/drink.

The street food smells great, looks interesting and is tempting, however, it is the most frequent reason foreigners get sick.  Take some time to build up your immunities – at least 3 weeks, before you consider tasting.  Make sure you know what you’re eating and how well it’s been cooked. In places like WangFuJing market in Beijing, sometimes many of the snacks aren’t cooked thoroughly.

For the less adventurous, use this phrase:

I am allergic to seafood, please ensure there is no seafood in my meal.
我对海鲜过敏,请确保我的饭菜里没有海鲜,谢谢.

Similarly, NEVER ever eat runny eggs, watery salad, pink chicken or other semi cooked items until your bodies get adjusted — weeks and weeks).

Initially, while you body adjusts and acclimatizes to the different smells, beds, sleep cycles, jet lag and other unique China conditions, we strongly suggest creating a stable diet of western style food – even McDonalds and KFC are great options to ensure you are eating safely and well.

Hotels will often not have suitable western style food available.  Depending on location of theatre venues or hotels, there may not be western food easily accessible to you.  Some hotels have regulation banning the use of portable stoves and microwave ovens in rooms, so you may be left with one option for obtaining the food your body needs as a dancer, singer or crew member – ordering from a delivery service.

Drink beer whenever you’re in doubt about the kinds of foods you have eaten – it will help digest whatever is not appropriate in your stomach… but don’t overdo it.

Remember, many things in China, including food, can be fake. Be wary of hard shelled fruits such as watermelon or cantaloupe, since these are often sold to markets by weight and growers routinely inject river water into the fruit as it’s growing to make them heavier and plumper for sale.

So I strongly suggest building a relationship with the Chinese management, translators or hotel concierge to assist with ordering.  It may be even smarter to get a bunch of the company together and do large group ordering of food, often selecting different cuisines each day, and all choosing from a single menu.

Major cities have web based and various iPhone app delivery services that will allow you to choose from a wide range of menus, and their service will go to the restaurant, pickup and and delivery to you such as Sherpa.com.cn (Beijing, Shanghai and Suzhou).

China has a long history of food and its Chinese cuisines culture is the most famous. Chinese cuisines have a number of different genres, but the most influential and typical known by the public are the “Eight Cuisines”: 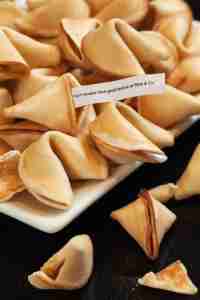 Tipping is not very popular in regular Chinese restaurants and is officially discouraged.  However, as a foreigner, you will be expected to leave coins or change or round up in restaurants if paying by cash.  If using a credit card, no tipping, since, unlike the USA, the credit card will be charged in full before you sign.

Instead of tips, if you eat regularly in a local restaurant, consider give some Hongbao to your regular wait staff (and chef’s / busboys / cleaners / doorman and manager) at CNY or before you leave China.  You will be amazed at appreciate they will be.  I often make it fun but loading a bunch of different amounts in different envelopes and let them lucky draw.

The essential factors that establish these difference are complex and include history, cooking features, geography, climate, resources, color and life styles.

Fortune cookies are not a traditional Chinese custom. They were invented in 1920 by a worker in the Key Heong Noodle Factory in San Francisco.

Cockroaches are served fried in China.

Every year, nearly four million cats are eaten in China as a delicacy.

According to popular legend, tea was discovered by the Chinese emperor Shennong in 2737 B.C. when a tea leaf fell into his boiling water. The Chinese consider tea to be a necessity of life. 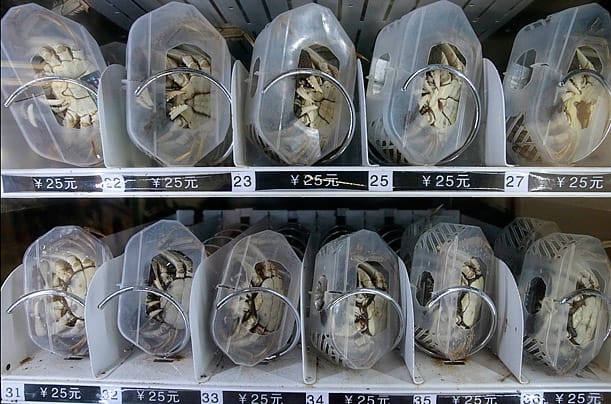 Vending machine selling live crabs in a subway station in Nanjing.
The machine sells an average of 200 live crabs a day, with prices from 15 to 50RMB

You can also try the Chinese human Hot Pot 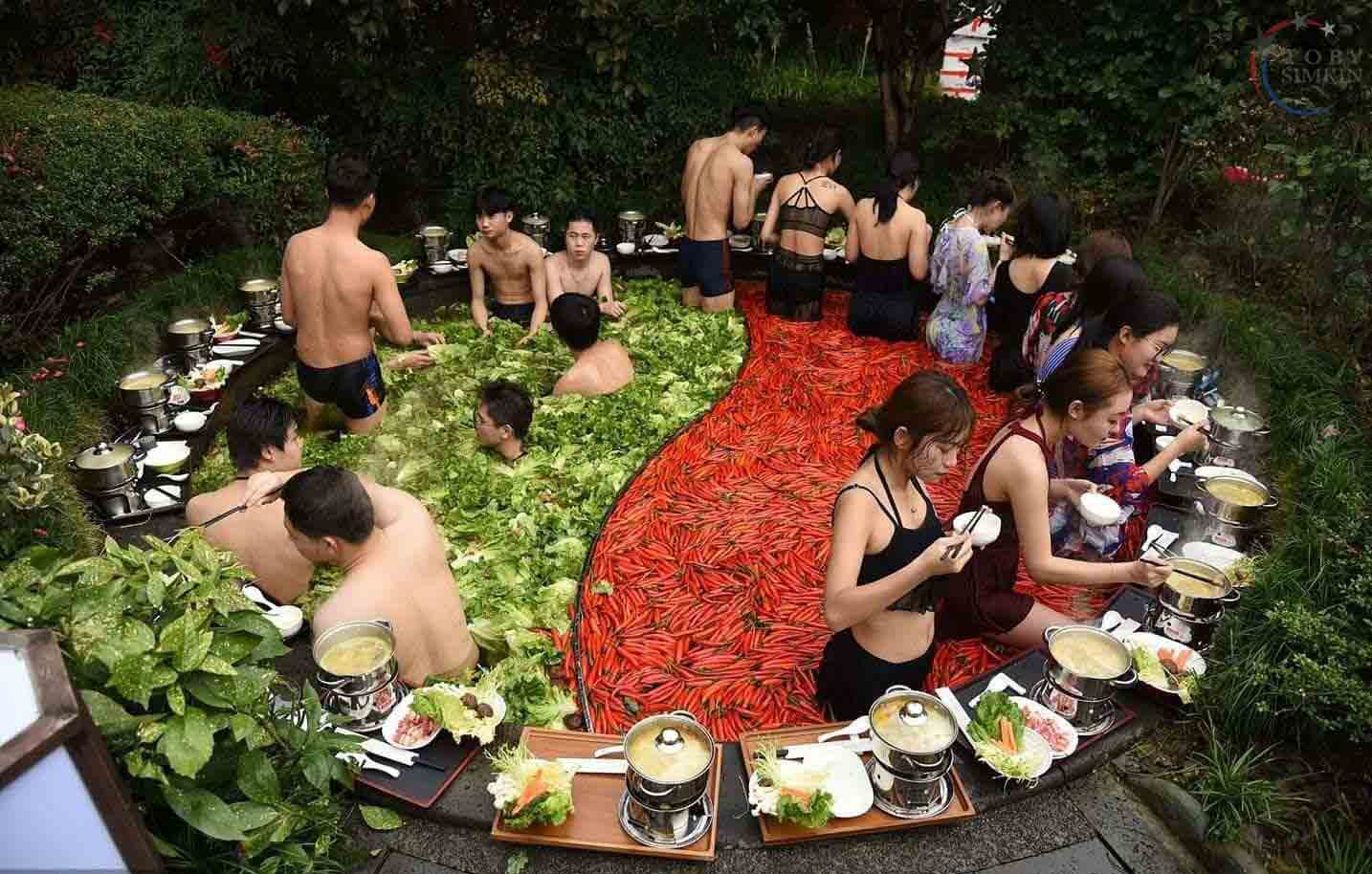 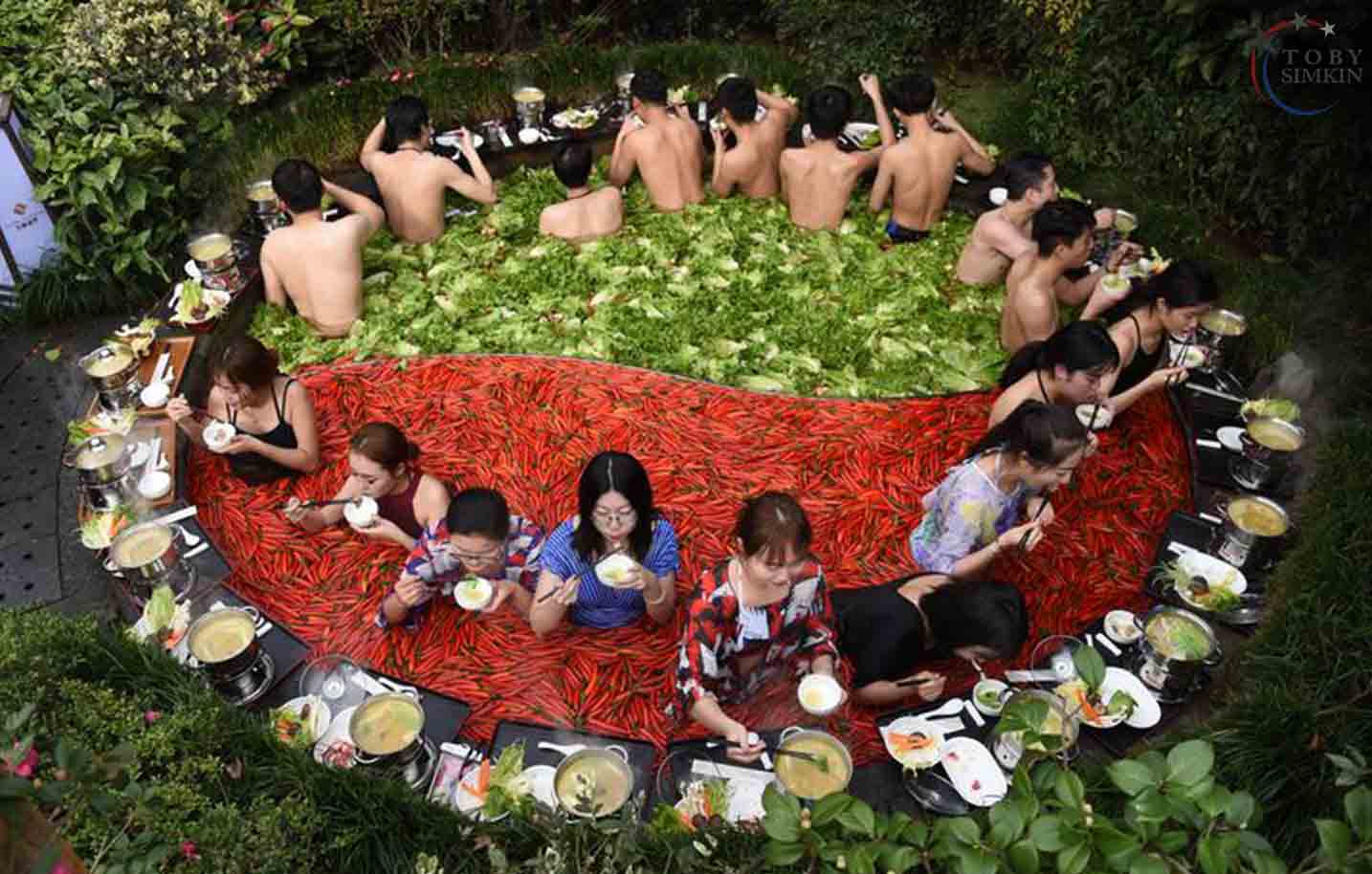 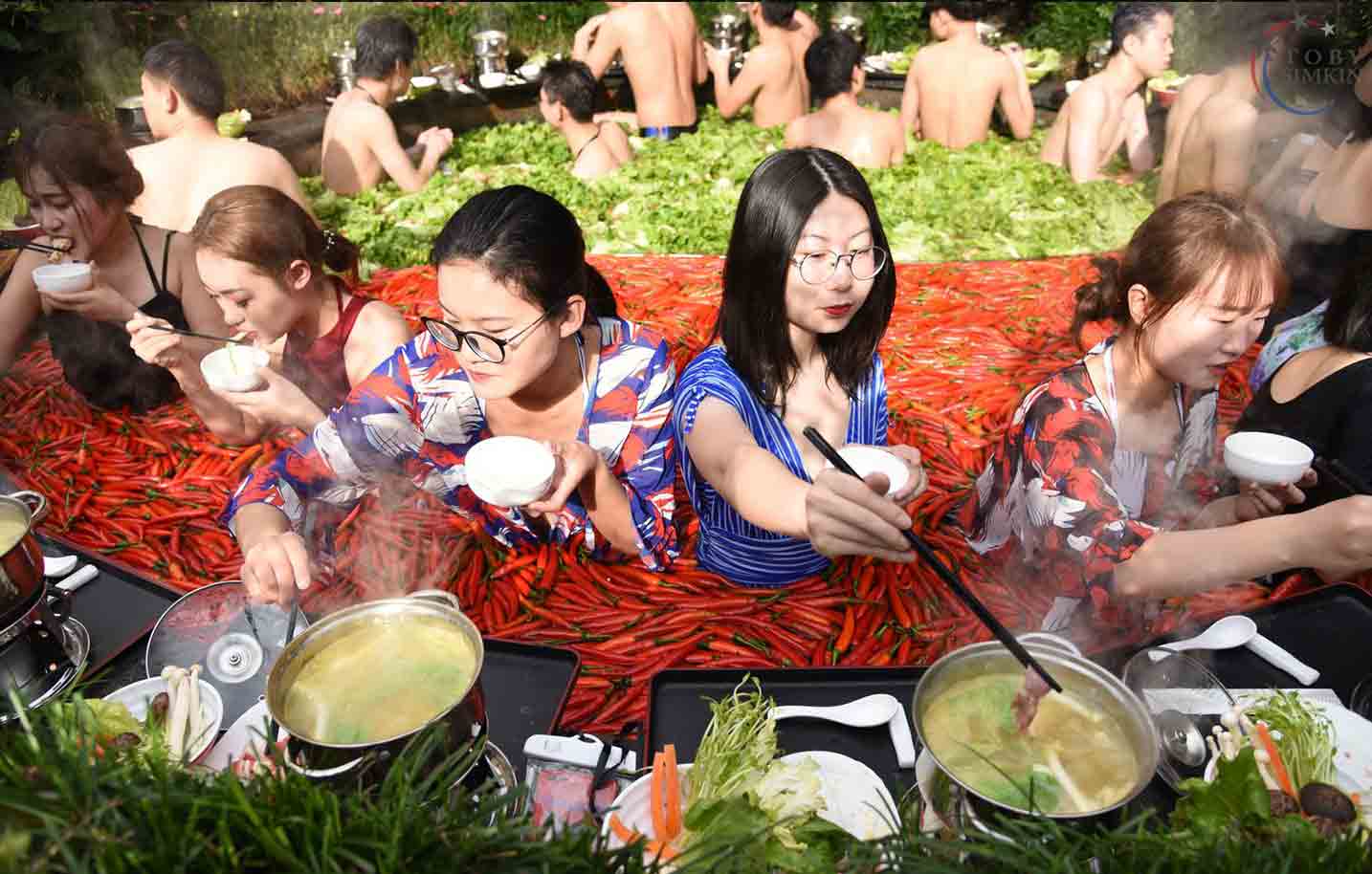 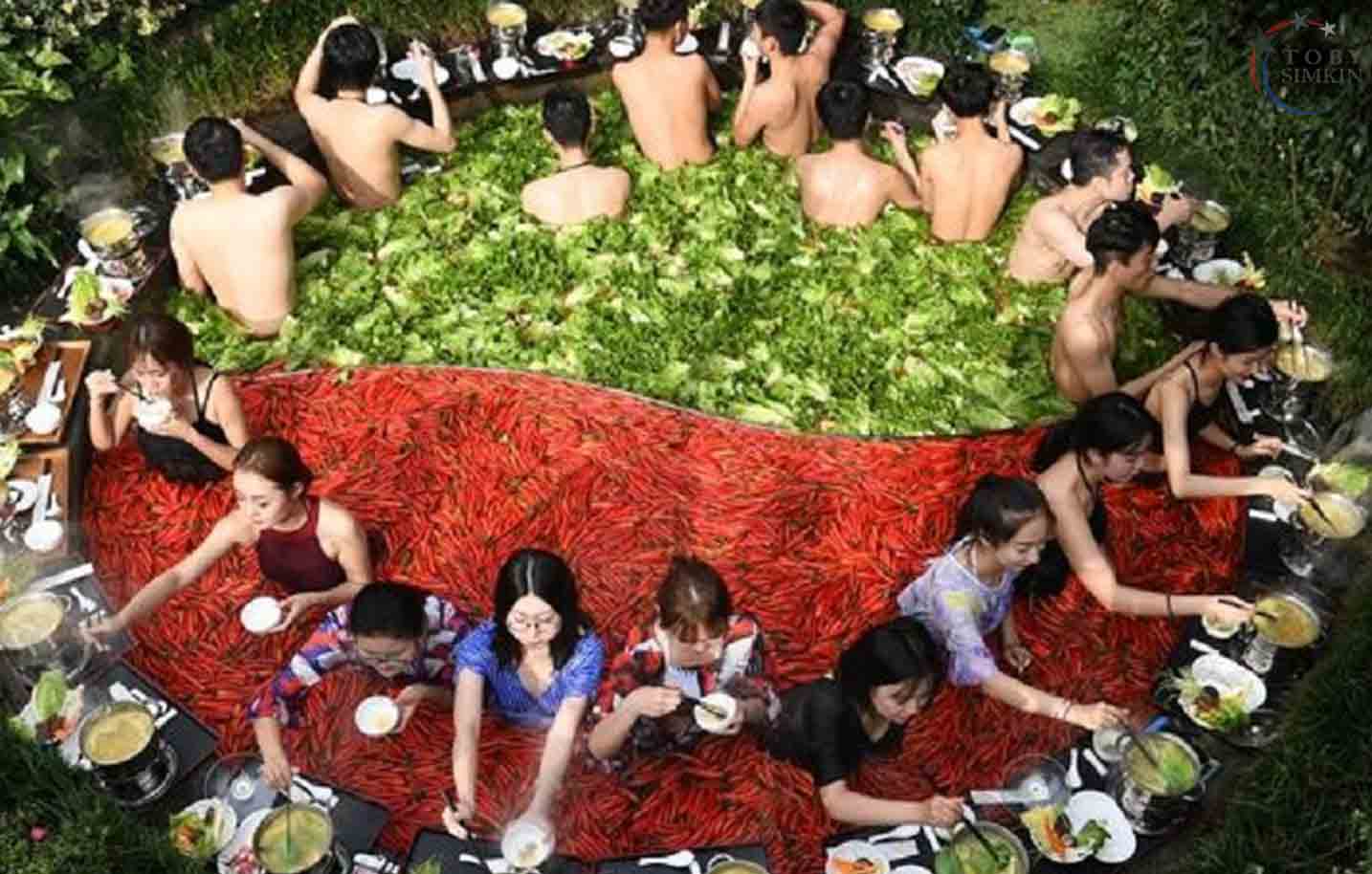 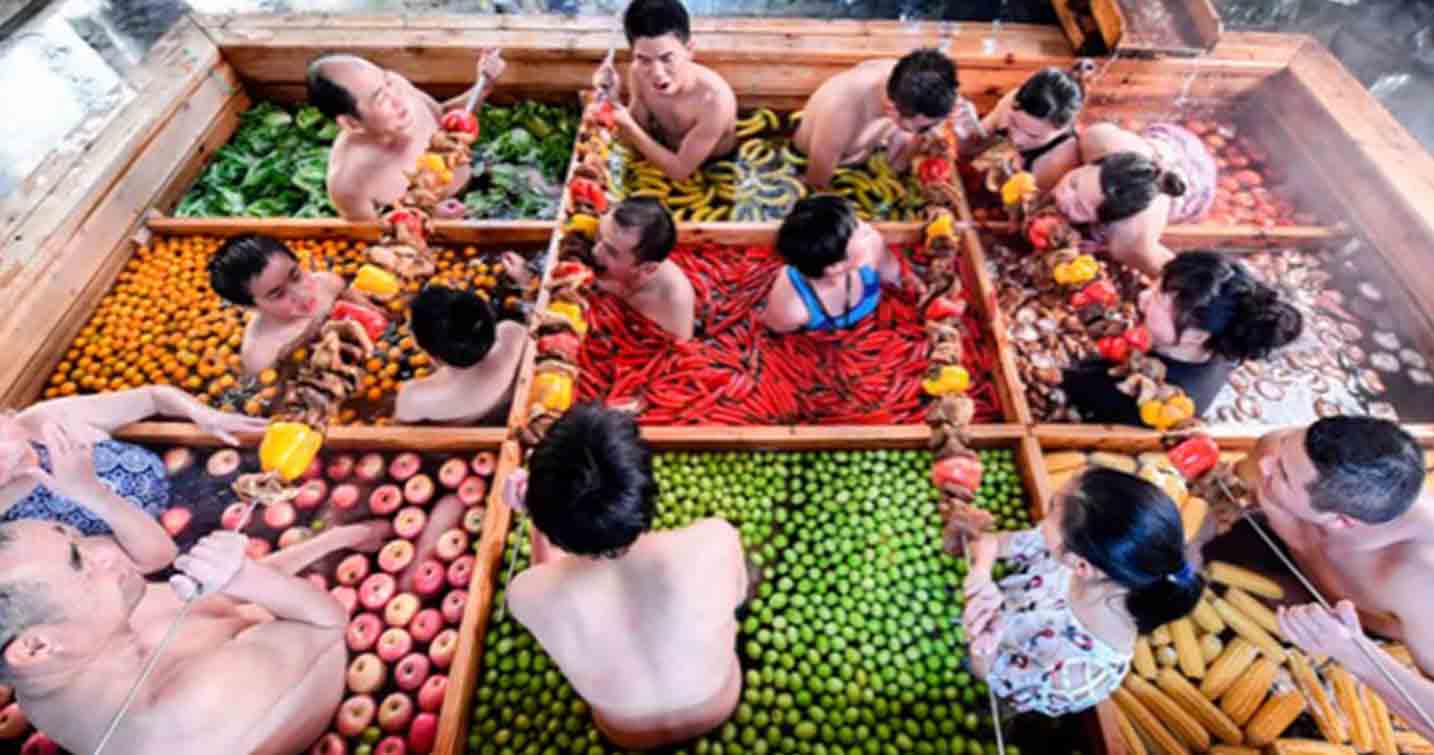