As a health precaution, it is advisable to drink bottled water, even in hotels and restaurants you should break the seals yourself or watch the seal snapping. Also be wary of bottled water and soft drink bought on the streets – check the seals — much is counterfeit.  All hotels will supply bottled drinking water (NEVER EVER drink tap water, or drinks with tap water ice).  Use the bottled water in your hotel room for brushing your teeth.  Water is so bad in some places, be careful when showering not to get it in your mouth or in your eyes.  When showering, turn your face down to avoid water in the eyes and mouth.

Drinking canned carbonated drinks in 4/5 star restau­rants should be fine.

Tea as a drink prospered during the Tang Dynasty, and tea shops became popular.  Good or fresh tea has a green luster in a tight shape, but poor one is loose and dull.  Good tea, especially fresh one, has a natural aroma like orchid or jasmine while the poor one smells stale.  Good tea leaves have a fresh mellowness.  The major types include:

Nearly all occasions are celebrated with alcohol in China.

Chinese liquor can be made from various staples – broomcorn, corn, rice, and wheat and is typically clear in color with a strong odor.  The most famous brand is Maotai and this holds the title of the ‘National Liquor’. I personally think it tastes like rocket fuel.  Moutai is the preferred drink of choice to get people drunk at banquets, and usually drunk in shots.  Some Moutai can be very expensive.  I once sat in a 1st class seat from Beijing to New York to Des Moines, and across the aisle from me sat a case of Moutai buckled into the seat and carried for the official banquet in Des Moines — reportedly, each bottle was worth over RMB 20k.

China’s counterfeit alcohol is made from poor quality ingredients or toxic industrial chemicals, consuming it could lead to serious acute illness or worse in the short term, and potentially a host of medium- and longer-term health problems according to the WHO (World Health Organization). The chemicals the WHO refers to include ethylene glycol, which is antifreeze, methanol, which can cause blindness, and isopropyl alcohol: all commonly found in Chinese fake alcohol, all dangerous. 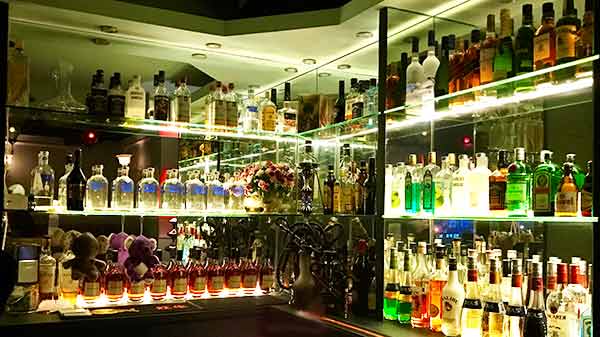 Every bottle in this bar is fake, without exception.

Most spirits in China are drunk with mixers and, although interest in them among the middle classes is rising, most imported brands are relatively new on the scene and it’s easy for shoddy knockoffs to be passed off as the real thing. This applies to champagnes too, with one Shanghai nightclub owner telling me recently: “These may be people who have suddenly come into money, they think they are drinking Dom Perignon – but they have no idea what it is.”

No one knows how much of the legitimate alcohol industry in China is eaten into by such fakery, but industry figures suggest it’s significant. Various estimates suggest around 70% of all alcohol in China, rising to 80% in Shanghai, is fake.

Chinese authorities led a raid in in 2011 to catch USD $305 million of fake alcohol and in December 2015 on a truck delivery that included 37,000 bottles of counterfeit alcohol, destined for a single bar street in Sanlitun, a popular drinking hub for expats in Beijing. Spirit companies such as Bacardi work with Chinese bars to promote refined drinking that is at odds with fake alcohol consumption.

Best way to avoid this is drink bottled drinks in bars – soft drinks, beer, coolers etc..  If you still want hard liquor, opt for a not so common drink (ie, top shelf liquor) – it is less likely to be fake.

China is a massive country, with relatively new, found wealth. It’s natural that the wealthy Chinese want to own, enjoy, gift and brag about having the best of the best. The best of the best refers to wine in this instance. China, due to its huge population remains one of the largest importers of French wine. In 2012, China imported almost 68 million gallons of wine with over USD $1 Billion Dollars – however, it’s not as it seems. Often, Chinese importers buy cheapest French wines, and re-bottle/label as expensive wines within China. 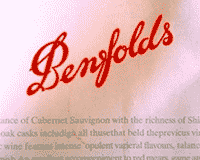 Due to the relative newness of wine into China, consumers do not always know what to look for (or taste). Often the name and logo are altered slightly, (such as the example here of “Benfolds”) so as to look like the original, yet it’s different enough not to be a counterfeit and yet, still fool consumers. The bottles are passed off as originals, because the purchasers were not familiar with the real label, and did not know what to look for. The inability to read French or English makes it even more difficult for some new, unsuspecting buyers.

A recent study suggested that over 50% of all bottled wine in China is likewise fake. For every real bottle of French wine in China, there is at least one counterfeit bottle of French wine, and the situation is only getting worse. In a single raid in 2013 inn the city of Yantai, the police uncovered USD $32 million in fake Chateau Lafite Rothschild, Chateau Latour, Chateau Margaux, Chateau Mouton Rothschild, Chateau Beychevelle, Chateau Pichon Baron, Penfolds and other famous brands. The principle cities for selling fake wines are Shanghai, Beijing, Tianjin, Shanghai, Guangzhou, Qinhuangdao, Dongguan, Shenzhen, Suzhou and Nanchang. 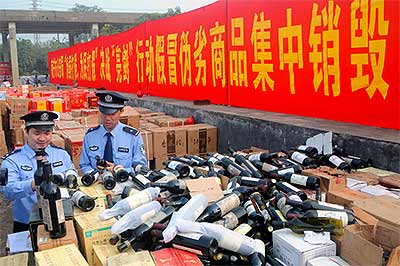 In 2015, in a single raid, 10,000 bottles of fake Château Lafite Rothschild, valued at around $16 million were uncovered.