Christmas celebrations around the world….

the most wonderful time of the year 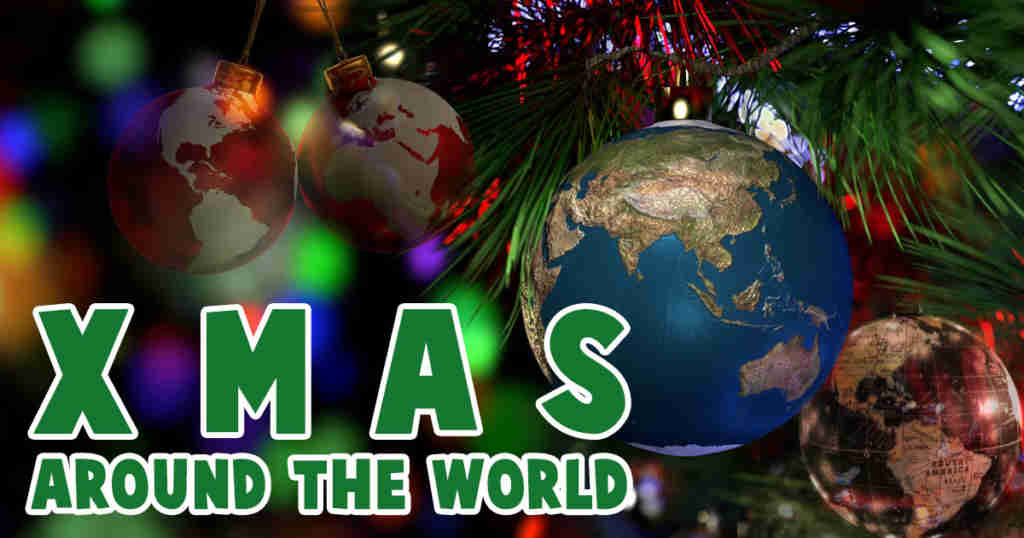 It’s the most wonderful time of the year. For a couple of weeks every year the world takes on a magic glow, people seem merrier and even winter somehow feels cosy (and when down under, it makes summer seem cooler).

Whether you’re celebrating a religious festival, like Hanukkah or Christmas, or secular occasion (like I do), you’re sure to have your own selection of rituals or customs that make the holiday season so special.  The XMAS season is packed with a variety of unique iconic symbols.

Our favorite Christmas traditions around the world are loud, proud, and guarantee oodles of festive fun. 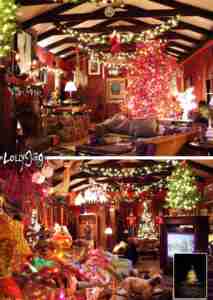 For example, in our most recent North American home, we had 37 Christmas trees, including a decorated (white plastic) tree ½ kilometre away in our forest lit by solar power at night – this nestled in at the front edge of our snowy forest at yuletide evenings was quite special.

Our Great Room however became the centre of Christmas décor, centered around a 14ft tree we picked from our forest, with a train running around its base. The massive fireplace was adorned with stockings, the stone cocktail bar with eggnog and Christmas bric-a-brac. We had previously purchased 2 massive nutcracker toy soldiers in New York, and these guarded the far end of the room, looking over a miniature forest of lit Christmas trees on the roof above the adjoining sauna.

Above our CD collection racks of over 3,000 CD’s (the benefit of my Broadway life), we had an army of miniature Santa’s, with their reindeer on guard.

Over the top? Maybe, but our houseguests and I loved it all.

Here are a few of our personal travel experiences… 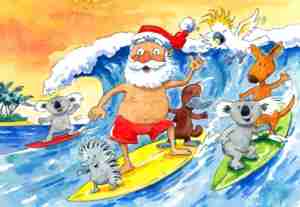 Christmas in Australia is often very hot. Whereas the northern hemisphere is in the middle of winter, Australians are baking in summer heat. It is not unusual to have Christmas Day well into the mid 30 degrees Celsius, or near 100 degrees Fahrenheit.  Santa can be seen on the beaches and in shorts.

A traditional meal includes a turkey dinner, with ham, and pork. A flaming Christmas plum pudding is added for dessert. In the Australian gold rushes, Christmas puddings often contained a gold nugget. Today a small favor or silver coin is baked inside. Whoever finds this knows they will enjoy good luck. Another treat are Mince Pies.

Some Australians and particularly tourists often have their Christmas dinner at midday on a local beach, Bondi Beach in Sydney attracts thousands of people on Christmas Day. Other families enjoy their day by having a picnic. If they are at home, the day is punctuated by swimming in a pool, playing Cricket out the backyard, and other outdoor activities.

The warm weather allows Australians to enjoy a tradition which commenced in 1937. Carols by Candlelight is held every year on Christmas Eve, where tens of thousands of people gather in the city of Melbourne to sing their favorite Christmas songs. The evening is lit by as many candles singing under a clean cut night sky. The sky with its Southern Cross stars is like a mirror. Sydney and the other capital cities also enjoy Carols in the weeks leading up to Christmas.

Australians surround themselves with Christmas Bush, a native plant which has little red flowered leaves.

Christmas shopping is often done in shorts and t-shirts. At many beaches Santa Claus arrives on a surfboard, or even on a surf lifesaving boat.  He wears swimming trunks and sunglasses. 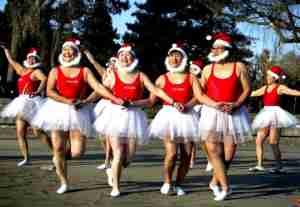 Officially there is no religion in China, however, some Christian children of China decorate trees with colorful ornaments. These ornaments are made from paper in the shapes of flowers, chains and lanterns. They also hang muslin stockings hoping that Christmas Old Man will fill them with gifts and treats.

The children are the main focus of these celebrations, they receive new clothes and toys, eat delectable food and watch firecrackers displays.

Preparations for the New Year begin the last few days of the last moon, when houses are thoroughly cleaned, debts repaid, hair cut and new clothes purchased. Houses are festooned with paper scrolls and in many homes, people burn incense at home and in the temples to pay respects to ancestors and ask the gods for good health in the coming months.

“Guo Nian,” meaning “passing the year,” is the common term among the Chinese people for celebrating the Spring Festival. It actually means greeting the new year. At midnight at the turn of the old and new year, people used to let off fire-crackers which serve to drive away the evil spirits and to greet the arrival of the new year. In an instant the whole city would be engulfed in the deafening noise of the firecrackers.

On New Year’s Eve, all the members of families come together to feast. Jiaozi, a steamed dumpling, is popular in the north, while southerners favor a sticky sweet glutinous rice pudding called nian gao.

Adults receive “13th month” bonuses in special red envelopes (hongbao).  These packets are passed out during the Chinese New Year’s celebrations, from married couples or the elderly to unmarried juniors. It is common for adults to give red packets to children. Red packets always contain money, usually varying from a couple of dollars to several hundred. The amount of money in the red packets should be of even numbers, as odd numbers are associated with cash given during funerals.  Since the number 4 is considered bad luck, money in the red envelopes never adds up to $4. However, the number 8 is considered lucky. 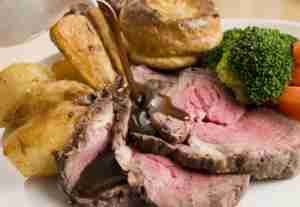 In England the hustle and bustle of the season begins well before Christmas and there is barely anytime for a break until the Twelfth night. There is preparation going on of foods, the sending of Christmas cards, the decorating of houses and churches, and the readying of gifts keep everyone busy even the youngest family members.

The English enjoy beautiful Christmas music. They love to decorate Christmas Trees and hang up evergreen branches, a tradition adopted from Germany during Queen Victoria’s reign and the branches are mistletoe and holly for symbolic reasons. Britain was the first country to hang up mistletoe.

The day after Christmas is called Boxing Day (a bit like Black Friday in the US) because boys used to go round collecting money in clay boxes. When the boxes were full, they broke these alms boxes in church and distributing the money collected amongst the poor in the parish.

Christmas dinner is usually eaten at Midday on December 25, during daylight. The table gleams with the best china and glassware, and at every place on the table there is a cracker. The meal begins with a toast, followed by the popping of the crackers which are paper tubes that explode with confetti, paper crowns and prizes when pulled – make for lighthearted fun around the holidays. The paper crowns are typically worn throughout dinner.

The traditional Christmas dinner is typically 2 roasted meats 1 being either goose (traditional) or turkey (american) covered in bacon and stuffed with sausagemeat, the other meat being a gammon. A variety of seasonal vegetables but essential are roast potatoes and brussel sprouts and always kilted sausages (also called sausages in blankets). For dessert Christmas pudding with brandy butter or brandy custard / cream, the pudding is so rich in alcohol that it is usually ignited before serving. The Plum pudding is served with little treasures hidden inside that bring their finders good luck.  Mince pies not only contain dried fruit but also suet and brandy. Christmas cake is also eaten and is traditionally made a couple of months (end of September) before.  After the meal they sit down in front of the Television for the traditional Christmas speech of the British Monarch. 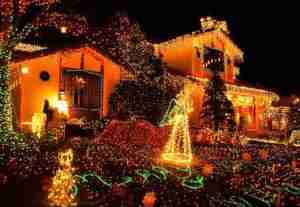 Santa Claus was born in US in the 1860’s he was named this as he had a white beard and a belly, so he was named Santa Claus as this was the Dutch word for St Nicholas, Sintaklaas. Although the Dutch had bought him with them in the 17th century, he did not become an important person at Christmas until the Novelist Washington Irving put him in a novel that he wrote in 1809. This first Santa Claus was still known as St. Nicholas, he did smoke a pipe, and fly around in a wagon without any reindeer, but he did not have his red suit or live at the North Pole, he did however bring presents to children every year.

In 1863 He was given the name Santa Claus and bore the red suit, pipe, and his reindeer and sleigh.

In America the traditional Christmas dinner is roast turkey with vegetables and sauces. For dessert it is rich, fruity Christmas pudding with brandy sauce. Mince pies, pastry cases filled with a mixture of chopped dried fruit.

The majority of Americans celebrate Christmas with the exchange of gifts and greetings and with family visits. For many, the day begins on Christmas Eve with the Midnight Mass. At Christmas it snows in many states, so dinner is usually eaten indoors. Dinner usually is roast turkey, goose, duck or ham served with cranberry sauce, then plum pudding or pumpkin pie followed by nuts and fruit.

American homes are decorated with holly, mistletoe and branches of trees, most have a Christmas tree hung with electric lights, tinsel, baubles, and strings of popcorn and candy canes. 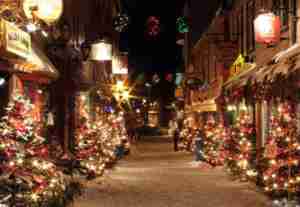 Christmas celebrations are quite similar in the variety to the USA.

In Quebec they display Crèches or nativity scenes in their homes as the Christmas decorations. After attending midnight mass, families may be served tourtiere or pork pie. Another favorite food is Boulettes or small meatballs. A Christmas banquet is called a reveillon.

In British Columbia Christmas turkey may be accompanied by either fresh or smoked salmon.

In Canada the traditional Christmas dinner is roast turkey with vegetables and sauces. For dessert it is rich, fruity Christmas pudding with brandy sauce. Mince pies, pastry cases filled with a mixture of chopped dried fruit. 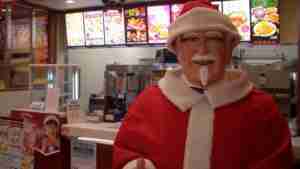 Christmas has never been a big deal in Japan and remains largely a novelty in the country, and that shouldn’t surprise anyone.  While Western countries enjoy mouthfuls of turkey, the Japanese are more likely to be found eating chicken… KFC  fried chicken at that! Chicken was introduced to the Japanese Christmas meal by the foreign workers who helped modernize the country in the post-WWII years. Kentucky Fried Chicken were one of the earliest companies to take advantage of advertising’s possibilities by linking the slogan クリスマスはケンタッキー (“Kentucky for Christmas”) with the December foreigner festivities.

KFC credits the success of its “Kentucky for Christmas” campaign with good timing. It entered the market just when the custom of celebrating Christmas with decorations and Western-style food—which had started in the late 1960s—began to take hold. The Japanese people happily accepted the model that KFC offered them for celebrating this strange foreign festival of Christmas in Japan.

From the Japanese perspective, particularly if you are celebrating Christmas with children, eating fried chicken together is fun and a special treat that elevates the day (which is otherwise just a typical working day) to an event.  Similar to most countries, children in Japan are told by the TV or Internet exactly what toys and games to buy, and what they should be doing around December 25 even if it is fried in batter!

The original version of the animated film The Snowman
was introduced by its author Raymond Briggs
but in 1985 David Bowie filmed his own introduction.