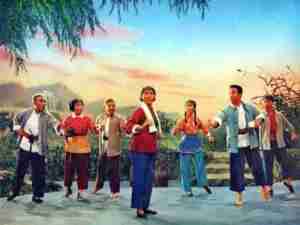 Thanks for sharing the film clip from “Longjiang Song”.  I wish I was old enough to have seen the original 1963 live stage production in Fuzhou!.  The form is reminiscent of my fond memories in 1988 with the Shanghai Ballet and their North American tour of “The White Haired Girl”.

Globally, there is often a fuzzy line between opera, light opera, song & dance and musicals.  The same fuzziness appears in the development of the Chinese musicals art form.   I think the early revolutionary song & dance shows absolutely are indeed the birthplace of the Modern China musical art form.

The emergence of musicals in China can be traced back to 1923, with a Children’s opera called The Sparrow and the Child and The Little Painter, created by composer Li Jinhui, (starring his own daughter, Li Minghui) and The Grape Fairy which was similar with todays style of musical drama. In 1927 he organized the “Chinese Dance School” and later went on to create the “Chinese Song and Dance Troupe”.

The typically stylized staging with a plot where the young men are the strong men, the young woman hard working in the fields, the elders are the wisest, and collectively, they all collaborate on defining a thought of prosperity and strength.  Use of stylized scenery, vivid lighting and Chinese instrumentation create a pastel image of a modern China as dreamed by it’s creators (and investors), but NOT done for typically commercial reasons.

This conceptual staging is SOMEWHAT similar to the early Rodgers & Hammerstein’s ‘Oklahoma’, ‘Carousel’ and ‘South Pacific’, however, (unlike the ‘Longjiang Song’ and other similar) R&H were absolutely focussed on commercial sustainability and profit.

In 1988, Japan’s Shiki Theatre Company, led by its artistic director Asari Keita, visited China and brought Hans Christian Andersen to Beijing, sparking a sensation. Keita, who pioneered musicals in Japan, helped the Central Academy of Drama set up a musical acting class and introduced more Western productions. But the trend was slow to catch on.

China’s first commercial experience with western musical theatre was a production of Disney’s Beauty and the Beast, in mandarin translation, was presented using the Japanese SHIKI company production which ran for 60 performances and cost the Central Government USD $2.4 million to stage celebrating the 50th Anniversary of the founding of the P.R. China.  An unauthorized DVD recording of that show was in wide circulation around that time.

In September 2001, at the Great Hall of the People in Beijing, with an audience of 10,000, the specially created Andrew Lloyd Webber – Masterpiece was the first authorized western musical theatre introduction in China. This event starring Elaine Paige, Coco Lee and Kris Phillips (Fei Xiang) performing songs in both English and Mandarin, joined by a full company of established performers from the UK, USA and Australia and a 60-piece orchestra. It was presented by the central Government. The DVD of this concert quickly made its way prominently into the network of DVD shops – at the time, the principle way for local Chinese to experience foreign films and culture. This helped propel both the brands of Andrew Lloyd Webber, CATS and musical theatre into the Chinese entertainment industry.

Chinese officials realized that the musical art form, with its high production values, well-crafted plotlines, and ultimately great spectacle, could visually and emotionally impress its audience and, as a contemporary art form, could be seen as a way to rejuvenate traditional Chinese theatre.

“Musical theatre will be like our TV. In the 1980s, our TV schedule was dominated by foreign dramas, but now it is fully loaded with pure Chinese productions.”
Jin Fuzai, professor at the Musical Department of Shanghai Conservatory of Music told CNN in 2011.

More importantly to Chinese theatre management, ‘Broadway’ branded musicals specifically can make huge profits solely on ticket sales, without worrying about piracy concerns. Yet in learning why the Broadway box office was booming, the Chinese have discovered that the Broadway model is not foolproof.

So it begs the question, when defining a modern Chinese musical, do audiences want them to be political in nature, or commercial?  If political, it’s a domestic market only, and a cost centre.  If commercial, the development of the commercial Chinese musical art form is in it’s infancy…. but the future, I believe, is very exciting….

I hope (and believe) the amazing Chinese advancements in visual creativity & technology will merge with the growing education of performing arts professionals, solid ‘triple threats’ and ingenious story telling to form new musical shows of global interest with Chinese characteristics that are commercially successful. 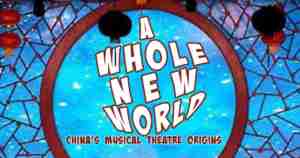