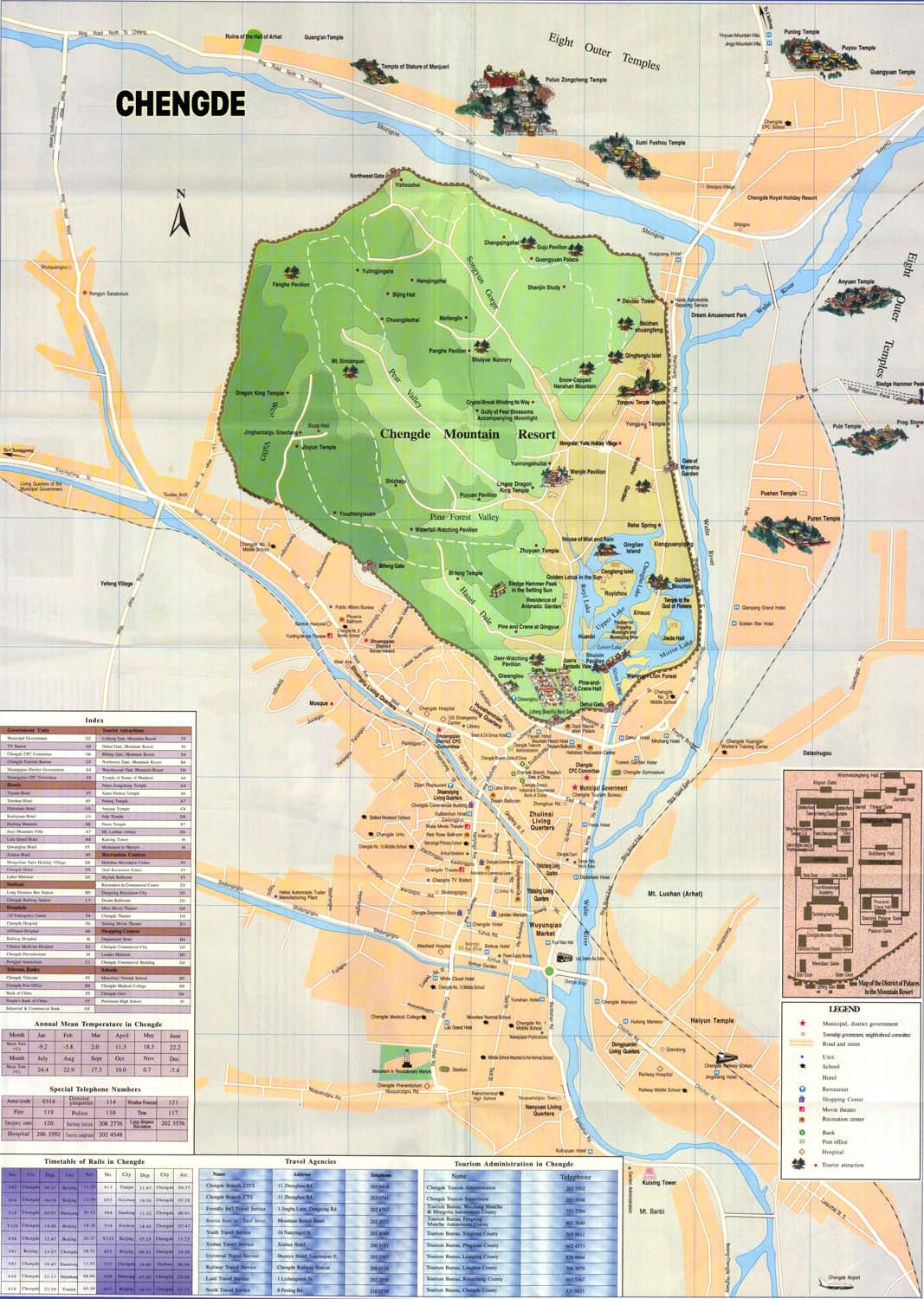 ChengDe (承德) is an 18th-century imperial resort, about 250 km northeast of Beijing, also known as Jehol or “Rehe.” It was discovered by the early Qing emperor Kangxi in the late 17th century, who found the cool summer climate and natural scenery appealing as a summer retreat. Kangxi and his successors built some 72 palaces there by the end of the 18th century, along with replicas of the Potala Palace of the Tibetan Buddhist lamas. Today Chengde is a popular summer retreat for Beijing urbanites.

In September 1793 Chengde was the site of the first British Embassy to China under Lord Macartney, whose part made the long journey from Beijing after finding that the Qianlong emperor had already decamped there for the summer. Macartney refused to prostrate himself before the emperor, and brought gifts from the British East India Company that were designed to open trade with China. The Qianlong emperor turned down his request, declaring that China already possessed all things, and had no use for objects of British manufacture. Although China was still near the height of its military power and commercial prosperity under Qianlong, his refusal to engage the emerging European powers on the verge of the Industrial Revolution may have contributed to China’s rapid decline as a world power.

Chengde came to be seen as unlucky after two 19th-century Chinese emperors died there, including the Jiaqing emperor who was struck down by lightning near the palace in 1820. The complex was largely neglected during the 20th century and still bears many traces of that neglect, although ongoing restoration projects were begun in the 1980’s.

The special natural products to be found in Chengde are wild almonds, walnuts, Chinese chestnuts, hazelnuts, mushrooms, hawthorn and nasturtium, etc. The almond juice made from wild almonds has distinct aroma and leaves a pleasantly lingering aftertaste, which is well known at home and abroad. The Chengde mushrooms come in a variety of species and these are not only widely sold in China but also throughout Asia and Europe. Most of this produce can be found in Kangqian Tourist Shopping Mall which is located at B1B, Rongji Garden, Puning Lu.

One of the most popular products with tourists is Teng’s Cloth-Pasted Painting which is regarded as a ‘unique talent of Cathay’. It is a new style of painting combining brushwork with sculpture, embroidery, paperhanging and paper-cutting, an art form invented by the folk artist Teng Teng. These attractive paintings can be hung on the wall or laid on a table as a truly perfect decoration.

Chengde woodcarving is another of the famous craft works. Walking sticks, furniture, screens and other handicraft made from rare wood from the mountains are elaborately wrought by the wood carvers.

Paper-cutting in Fengning County, silk brocade and tablets of the Mountain Resort, porcelain carving, calligraphy and painting, as well as jade pillows are also characteristic souvenirs of Chengde.