My first time as a stupid hero @ Chain Bridge Forest

This funny story was from the early 1970’s when we were living in Washington DC (my Father was the Australian Defense Attache at the time) in a rather upmarket are of McLean in Virginia called Chain Bridge Forest — I saw what I thought was a burglar, jumped off the roof to help save my sister (in the basement), broke my leg, crawled across the street to neighbors who called the police/secret service.   Ouch, did I inadvertently cause quite a controversy.  Sorry Sis!.  Thanks to the history preserved in my mothers detailed memoirs, flashback memories of long-ago events. 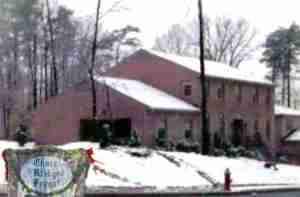 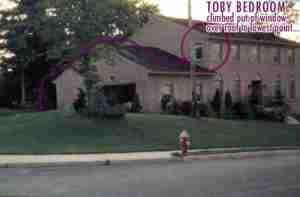 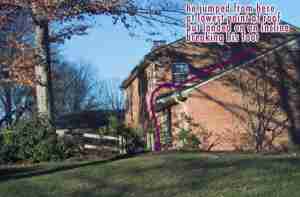 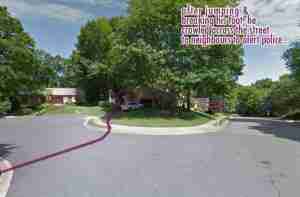 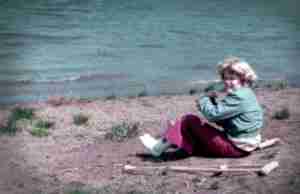 I couldn’t sleep tonight, as the funny story of the way Toby broke his foot was going round and round in my head, and ill though I was, I couldn’t stop laughing.

Max & I were attending an event in Ottawa, Canada when we received news of the emergency in Washington, that required me to fly home to sign hospital operating release forms for Toby. The army organized an emergency flight for me to get to D.C. overnight – I was the only passenger.

The next morning I was taken from the airport directly to Walter Reed military hospital at 8 a.m. and Toby went to the operating theatre about 11 a.m. and was back in his room at 2 p.m. Whilst he was being wheeled on a trolley to the theatre he suddenly sighed, and in a plaintive voice said “I have a feeling I’m not going to make it“. The orderly and I were in fits of laughter.

Toby broke 2 metatarsal bones in his foot, unfortunately right up at the toes, near the growth point, and there’s a 50/50 chance that the two affected toes won’t grow again. However, he has a big foot already and the doctors don’t foresee any problems if this should be the case.

Now for the story of how it happened.

When my daughter Mandy and Jenny went to a Ball at Annapolis Naval Academy, Jenny met a nice young Naval cadet named Leo, and he asked her if she would go to the movies with him one night. She agreed to do so. However, the young man was black, and when Jenny’s father heard this he told her she couldn’t go out with him and had to break it off. Her parents thought she had done so, but Jenny felt badly about it and wanted to explain things to him to his face, and arranged with Mandy to ask him round to our house. They decided they had to keep Toby from knowing, so put him to bed early (their first mistake), left the ground floor in darkness and went down to the basement to await his arrival. They had already arranged with Leo for him to come in without ringing the doorbell, go straight ahead and then go down the stairs to the right to the basement.

From his bedroom, Toby heard a car arrive and looked out of the window to see a strange young black man (a most unusual sight in this area) carrying a black bag, walking up the path. Toby didn’t hear the doorbell ring, so raced to the top of the stairs and looked over, just in time to see the front door wide open and the man walking straight in. The fellow got his instructions mixed and turned left into our dining room, where I keep most of my silver, so naturally Toby thought he was a burglar and the bag he was carrying was for the loot!

Terrified, Toby went back into his room to think how best to raise the alarm and rescue his sister and her friend. Having thought, he made his bed in case the man came upstairs and realized he should be there and that he’d gone to get help, and then climbed out of a side window in his room onto the garage roof and closed the window. He knew that if he jumped down there he would be heard, as the garage is next to the dining room, so he climbed up and over the roof to the other side and jumped down at the lowest point he could find. It isn’t terribly high, but I think in his fright he jumped the wrong way, and that’s when he broke his foot.  Our best friendly neighbors both the Mars (chocolate empire) were camping, and the Lee’s (kung-fu films) were in San Francisco.  So he dragged himself across the road to the other neighbours across the court from us, and they called the police.

The diplomatic protection police (secret service) came screaming up in five cars along with local Virginia police, and a motor cycle and surrounded the house with guns. Two of them rang the doorbell and Mandy opened the door, and found herself looking down a couple of gun barrels and nearly fainted. The police told her there was a burglar in the house and she suddenly remembered Toby and tore off upstairs to check on him. Having put him to bed half an hour earlier, she found his bed neatly made, no Toby, and thought he’d been kidnapped (a problem we were concerned about recently) and promptly started to have hysterics!

The police calmed her down and told her where he was. They then came back downstairs, just as the poor unsuspecting boy-friend came up from the basement to see what was going on. The police held him at gunpoint and made him turn out his pockets and prove his identity. Having got everything sorted out, the police then went back to the neighbours and said that Toby had given a most accurate account of what happened, and had they seen what he saw they would have jumped to the same conclusion!

Can you guess what poor Leo had in his little black bag? Two bottles of Australian wine that he had brought as a gift!

Fortunately Mandy had the presence of mind to call Colonel Cole (Max’s adjutant), who took Toby to Rader Clinic at Ft. Myer, and from there he was transferred by ambulance to Walter Reed Hospital.  Poor Kevin, Judy and Mandy were at the hospital until 2.30 a.m. That was the day Mandy started her new job at the Embassy!

Jenny, of course, was in the most awful trouble with her parents, and I’ll never forget how she looked when they met me at the airport. Her father had refused to speak to her and said he would never speak to her or trust her again. Poor Jenny was devastated and looked really ill. I took her aside and agreed that what she had done was wrong, but I let her know that I understood, and then I’m afraid I really let Bill have it. I couldn’t believe that anyone could be so racist and so cruel to his daughter.

Toby came out of Walter Reed hospital on the Friday afternoon, and I was able to spend a little more time in bed and try to get rid of my ‘flu. Because I wasn’t able to see a doctor or stay in bed it took a long time to shake off, and I’m only just back to normal.