rub my belly for wealth & happiness 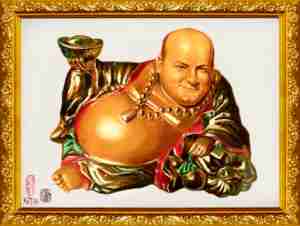 He painted this and surprised me with it.

I am fat. I have a large belly, and an (almost) bald head. Apparently, I smile and laugh a lot. Put this all together in China, and apparently it means I am the reincarnation of ‘Mi Lo Fu’ – the laughing happy money buddha – he’s also large fat and indescribably happy.

Because of the apparent similarities between my real body and that of Mi Lo Fu, I often (VERY OFTEN) have my belly rubbed by complete strangers (in elevators, shopping, bars & restaurants) — rubbing the belly apparently is good luck and brings wealth to the person rubbing. When in the south of China particularly, I often get dragged into wedding photos of couples I never met.

During a business trip to HeFei, Anhui province, one of our Chinese business partners decided to invite me to a Buddhist temple 3.5 hours south of the city, in a mountain region of the province, where there are exactly 99 temples (9 being a good luck number, usually reserved for the emperor) most of them restored in Ming and Qing Dynasties. One of these temples is the major one, and the home of the Chinese-Buddhist association (the only group officially sanctioned by the Chinese Government, where practicing religion is still generally illegal). To visit the major temple is a dream for many Chinese Buddhists, that typically are forbidden from traveling outside their province boundaries for government regulatory/security reasons, or for travel cost. 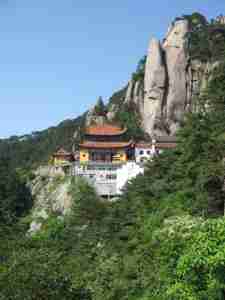 The Minister for Trade and Investment of Anhui province, and General Secretary of the Communist Standing Committee (Mr. Tan) joined us for the weekend trip.

The temple was at the very peak of a mountain called Mt. JiuHua, with a 15 minute ride cable car system to partially go up and down.  Buddhism was first introduced to Mt. Jiuhua in the year 401. Mt. Jiuhua has become the place where religious rituals were held to worship the God of Earth. Many scholars, politicians and monks make the journey to the mountain, and thus Mt. Jiuhua got its fame.

Upon arrival at the top, and after a few minutes doing the obligatory Buddhist incense lighting, north, south, east & west and kneeling respect to the golden Buddha, then burning fake money and paper cars as an offering, the Minister then told us he had organized a private audience with the Vice President of the China-Buddhist Association (in China, the President is a figurehead, the Vice President is equivalent of CEO – and generally considered the #1 person).  Mr. Tan had done this as his way of showing his power and strength to impress us (a very common tactic in Chinese business dealings).

We were then ushered into a side room of the temple – the typical Chinese VIP room, where we were introduced to the VP, and whom it turns out, is the most venerated monk in China – photos of him greeting the Chinese president and the King of Thailand adorned the VIP room walls. 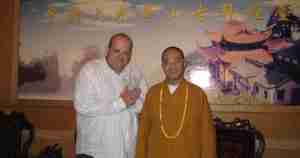 I bowed in respect to him, then we sat. Because of my business card, he thought I was from the USA, and following his lead, we discussed world politics, hatred of the Bush administration, the problems in Iraq and likelihood of escalating tensions in North Korea and Iran.

We discussed the importance of top quality entertainment to keep people happy and distracted from the wars and destruction. We discussed my years in China, my impressions of it’s people, it’s history and of it’s culture. We discussed Australia and my mothers 80th party and cruise. We discussed the beauty of Canada, of it’s politics and of Montreal’s culture. Through my translator, we talked for about 2 hours. I was actually rather bored and at the time was not aware of the significance of this.

The VP then removed the wooden beads of his wrist, kissed them, rubbed each one of them, and then handed them to me. I accepted them, examined them with care, then placed them on my wrist. 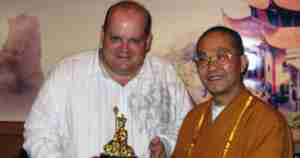 The monk returned with a plate with a golden Ti-Tsang Wang P’usa statue. This particular deitie represents Great Compassion and Wisdom is Buddhist faith. The VP kissed it, rubbed it with his fingers, then presented it to me as a gift.

After he handed me the statue (according to my translator, rare and valuable), he then invited me to dine with him. At this juncture, the room was ablaze with excitement with the Chinese – lots of talking and bowing and chatting between them.

I thought, oh well, he gave me a nice gift, I can suffer another banquet, and THEN get outside to take photos.

We were escorted into the monastery dining hall – then into a private room at the back of the main dining hall. The room was austere – everything wooden. No gold, no elegance. The VP sat me to his right, and out came bowls of rice and vegetables (Buddhists don’t eat anything that has been killed, so no meat or fish). We had the fastest banquet dinner in my 4 years of China history – perhaps 20 minutes – it was GREAT (typically, the Chinese banquets last 2-3 hours, are formal, gold plates and chopsticks, and toasts, and wine, and beer, and presentation of 30-40 exquisite dishes elegantly presented with fabulous colors).

During dinner, the VP proclaimed me a “Money Monk” – according to my translator, because I have the deep believes that Buddhist share of world peace, harmony, compassion and wisdom. However, I could never be a true Buddhist since I believe in capitalism. Hence the “Money Monk” moniker. 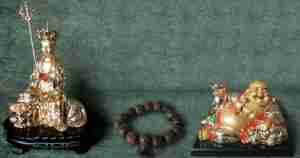 As we were about to leave, at this point, I was actually enjoying it all, another monk arrived with a Mi Lo Fu Buddha statue – representing wealth and prosperity.

After departing the VP, we headed back down the mountain (to visit more temples the next day). In the cable car going down the hill I was told by the Minister that that the VP had spent more time with me than any other foreigner, and really enjoyed meeting me. He said the VP’s monk assistant said it was also the first time the VP had ever invited non Buddhist to dinner with him, let alone a foreigner, so this was a major honor.

At the foot of the mountain, the day’s events were relayed to others in the hotel by our Chinese party – when they saw the Ti-Tsang Wang P’usa statue, they said it’s only given to very special people, and the VP last year had given one to Chairman Hu, and NOT invited him to dinner.

So the entire day was an honor indeed.

In 2008, an artist friend in Shanghai surprised me with a gift or a large oil painting…

The oil painting shows my head on the Mi Lo Fu Buddha cloaked in golden robes, holding a gold bar worth RMB 1 million, and with a giant exposed belly, rubbed above the belly button.

This oil painting has since been adapted into animations, stickers and other things for daily use in China as it has become an iconic symbol of me within my circle of friends.

Now I was better prepared to understand the random belly rubs and touches from complete strangers in the years that followed.

Buddhism has had a long history in China and has been instrumental in shaping Chinese culture and tradition. Throughout the millennia, Buddhists in China have faced persecution under various leaders. Chinese Buddhism is one of the oldest forms of Buddhism in history and hosts the world’s largest Buddhist population. Unlike Buddhists outside the country, Chinese Buddhists believe in a combination of Taoism and Buddhism, meaning they pray to both Buddha and Taoist gods, the latter of which teaches that enlightenment can be achieved in a single lifetime without reincarnation.

Another way in which Chinese Buddhism differs is in the depiction of Buddha. Original Buddhist teachings taught that Buddha was extremely gaunt. In most Buddhist countries, Buddha is depicted as being very skinny and meditating under a tree.

In stark contrast, China’s Mi-Lo Fwo, (laughing buddha) is the most common and most popular depiction of Buddha in China for centuries.

Chinese Buddhists’ main goal in life is to ‘be happy’, and it’s for this reason that depictions of Buddha show him as being fat and laughing – just like me.

There are thousands of statues of me throughout China. (well I guess some may think they are just of Mi Lo Fu). One of my favorites is in the Hefang old street in the city of Hangzhou, that additionally has dozens of boys crawling all over my body.

During my tour of the musical FAME in China, a general manager from the city of Wuhan wanted to take a photo of me a short walk away from a press conference location. I did not know why at the time. Once I saw the photograph, I understood: 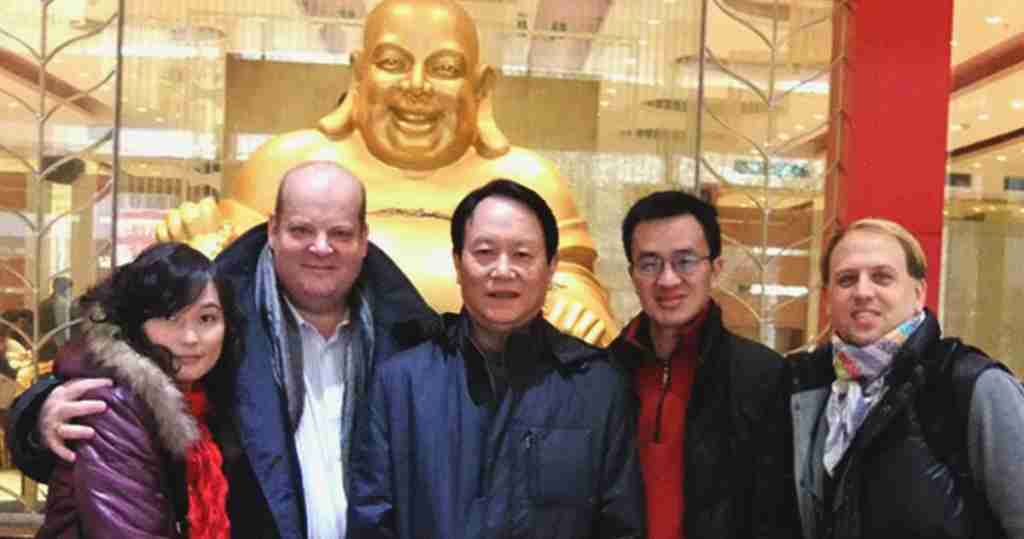 A symbol of hope for a better world

Budai (布袋) is a Chinese monk who is venerated as Maitreya Buddha in Chan Buddhism. He lived around the 10th century in the Wuyue kingdom and is revered in folklore as a wandering vagabond who brought abundance, fortune, and joy to all he encountered with the help of his mystical “cloth sack” bag.  Budai is most jubilant when in the presence of others, especially children.

His name literally means “cloth sack”, and refers to the bag that he is conventionally depicted as carrying as he wanders aimlessly. His jolly nature, humorous personality, and eccentric lifestyle distinguish him from most Buddhist masters or figures. He is almost always shown smiling or laughing, hence his nickname, the “Laughing Buddha“. As he is traditionally depicted as fat, he is also referred to as the “Fat Buddha“.

Also known throughout S.E. Asia as: