Most Broadway stars brilliantly rise and blast down in their fall

There has been a lot of silly talk in groups on Facebook describing nearly every singer / dancer / actor as West End or Broadway stars, and trashing people they never met.  It of course drives me crazy, since the title of “star” should be reserved for the select few that really are, and the jealousy of stage door groupies damaging reputations of some real stars for their personal gain I find offensive.

What Makes a Star?

A Broadway or West End “star”, in my opinion, is reserved for a select few that can sell tickets by their name alone, almost irrespective of the show itself.  The living likes of Broadway stars Julie Andrews, Liza Minelli, Angela Lansbury, Carol Burnett, Hugh Jackman and Barbra Streisand come to mind.

In my opinion, these days, the term “star” is grossly overused.  Just because a name is billed above title, it does not necessarily mean the person is a star.

Many are indeed celebrities, but few are Broadway stars.

I have been fortunate in my career to work with many celebrities (and a few stars), and generally almost all share consistent personality traits of kindness and like-ability that I have observed onstage, offstage, and also by their agents / managers.

What goes up, often goes down.

Some Broadway stars (such as those I mention here) have been able to remain at the pinnacle of stardom for a variety of reasons, but usually, it’s because producers want too keep re-hiring them, since often, the bigger the star power, the nicer they (and their agents) are.

This however, cannot be said for all.  On their way up from celebrity to star status, particularly if achieved quickly (usually by film or TV), when there status starts waning, the more arrogant & mean they become, likely as a result of unforgiving desperation.

I created this diagram to help understand my thinking… 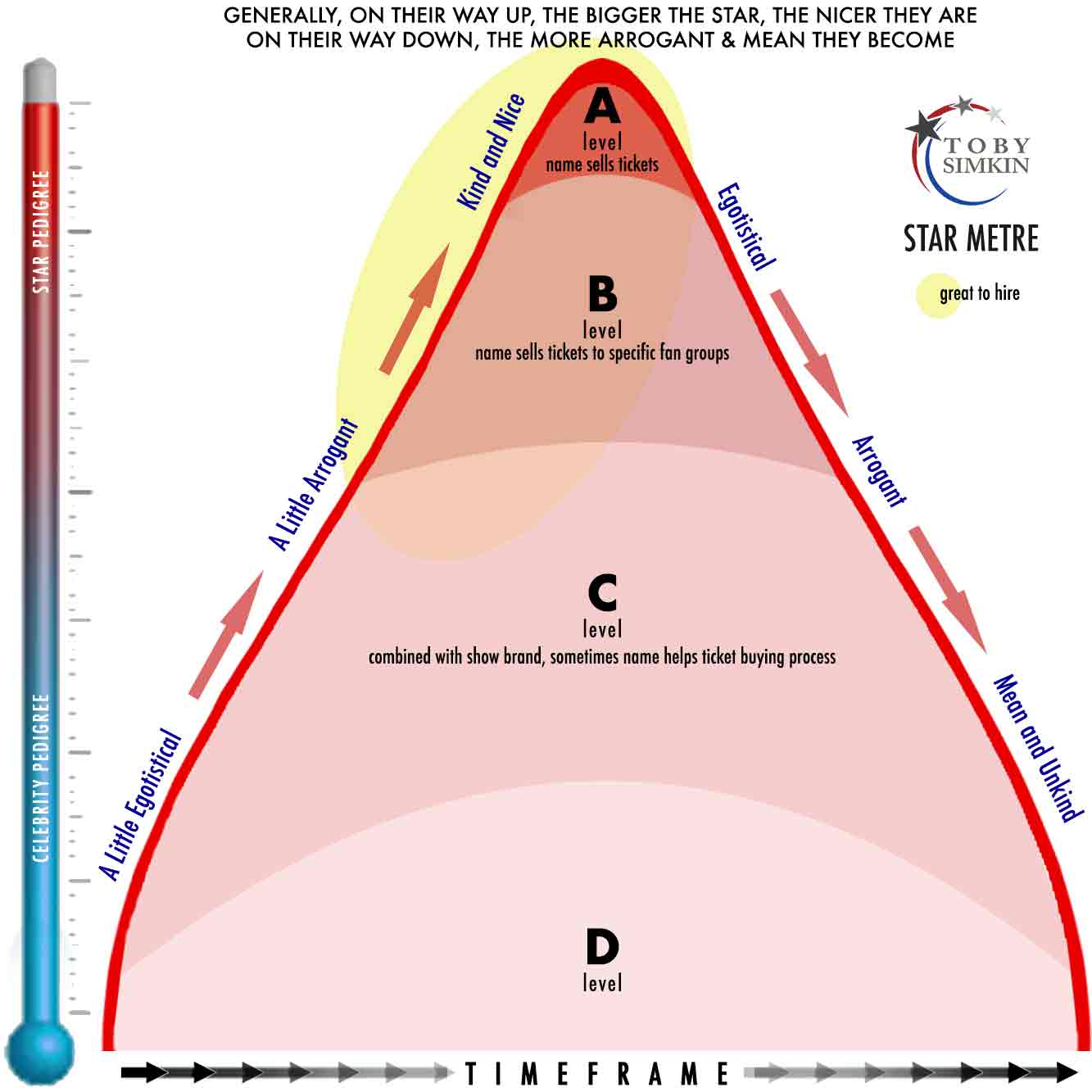 In my opinion, most actors / singers / dancers billed ‘above title’ today on Broadway and the West End would be classified in the “B” level. While most billed in caps below titles would be “C” level.

London & Broadway stars should be nice

Nearly all A/B/C and even D levels have some form of unique talent, that generally separates them from the pack, but the personality of the individual is often equally important, particularly on touring productions.  I’ve been in enough meetings in my career to see a hugely talented, well known name struck off a short list because of their temperament in favor of a lesser known name that is truly considerate, kind and nice.

Often above title casting of a certain name is a prerequisite of investors money, marketing as well as creative direction.

I decided to ignore peers in my little global theatre community who are quick to slander others for the sake of themselves feeling superior.

For more than a century, Broadway productions have not only made young, unknown actors household names but also produced real stars associated with performances, songs, and dances that have entered mainstream American culture. The following legendary household names, have consistently starred in many shows over many years, and in combination with the creative music, writing and design elements that enhanced their work, have placed them all at the pinnacle of Broadway / West End stardom for eternity:

Any name on this incomplete star of stars list, would, in the peak of their time, sell tickets.  Plus, the vast majority (but not all) were known to be (or are) very nice people, and could easily lead a company in the long term.