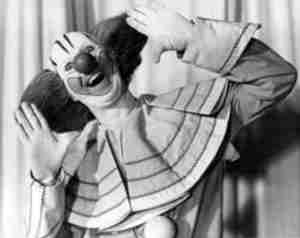 While living in Washington DC, at the age of 8 or 9, I was invited as part of a contingent of diplomatic children to watch a live taping (with my Mum) of the #1 kids show of the time, “Bozo’s Circus”.  Dick Dyszel played Bozo the clown on WDCA channel 20 in Washington, D.C. The studio audience for each show held anywhere from 75 to 150 children & parents who played in-studio games and enjoyed an occasional comical skit.  There was a 2½ year waiting list for audience tickets!

I was lucky to be picked that day to have an “interview” with Bozo and then do the “Bozo’s Grand Prize Bonanza Game” where I had to throw a ping-pong ball into a series of buckets to win a prize.

… now if I could just make my ball drop into bucket #6, I would win a bicycle and a silver dollar, while confetti and balloons dropped over the stage.

I failed, and left humiliated to go home with only the 5th bucket winnings. 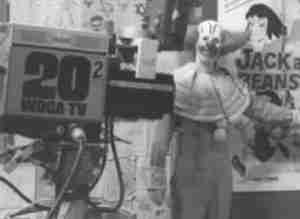