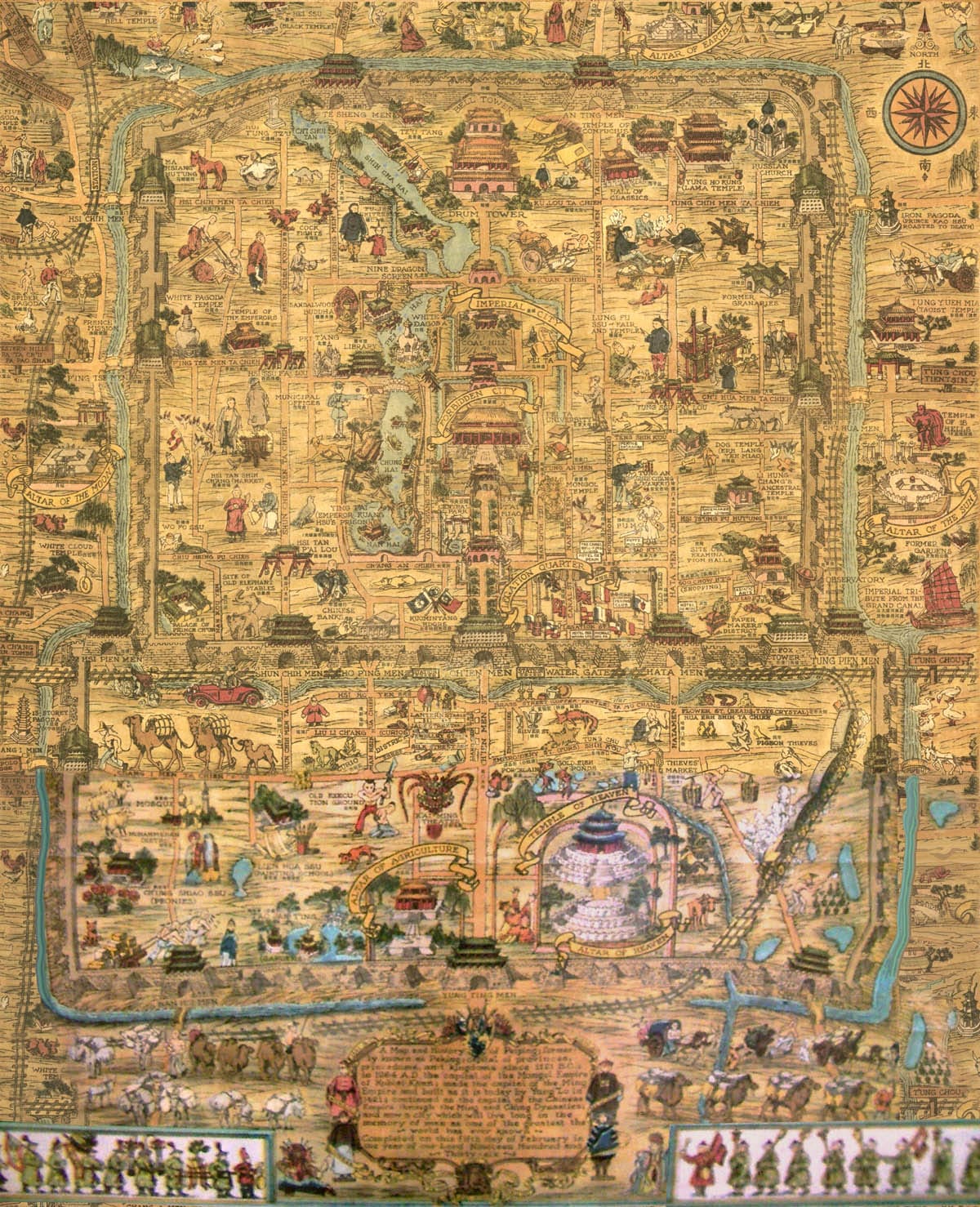 Beijing’s long and illustrious history started some 500,000 years ago. It is here that the ancestors of modern Homo sapiens, Peking men, lived in caves. Records show that Beijing has been an inhabited city for more than three thousand years and has endured invasions by warlords and foreign powers, devastating fires, the rise and fall of powerful imperial dynasties and has emerged each time as a strong and vibrant city. Beijing City was established over 3,000 years ago and was called Jin City in the Western Zhou Dynasty (11th century BC – 771 BC). Ever since Emperor Qin united China in 221 BC, Beijing has played an important role in north China. It was the capital city in the Liao (916-1125), Jin (1115-1234), Yuan (1271-1368), Ming (1368-1644) and Qing (1644-1911) dynasties. During these 800 years, 34 emperors lived and ruled here. The world renowned Forbidden City was built during this period. At the end of the Qing Dynasty, World War I broke out. Beijing became the focus of invaders. The war disrupted the society. Many residences of royal families were robbed and burned down. After that, the whole country was reduced to the status of semi-colonial and semi-feudal society. It wasn’t until October 1st, 1949 that the People’s Republic of China was founded and Beijing became its pride.

The name of China’s capital has changed over the centuries. At one time or another it has been known as Yanjing, Dadu, Beiping and Peiping. Peking or Beijing means “Northern Capital.” Beijing is the officially sanctioned pinyin spelling based on the Mandarin dialect. Beijing is the second largest city after Shanghai.

The city is marked by its flatness and arid climate. There are only three hills to be found in the city limits (in Jingshan Park to the north of Forbidden City) and mountains surround the capital on three sides. Like the configuration of the Forbidden City, Beijing has concentric “ring roads”, which are actually rectangular, that go around the metropolis and serve as good reference points as one attempts to move about the city. Beyond the ring roads are the most-visited portions of the Great Wall of China. 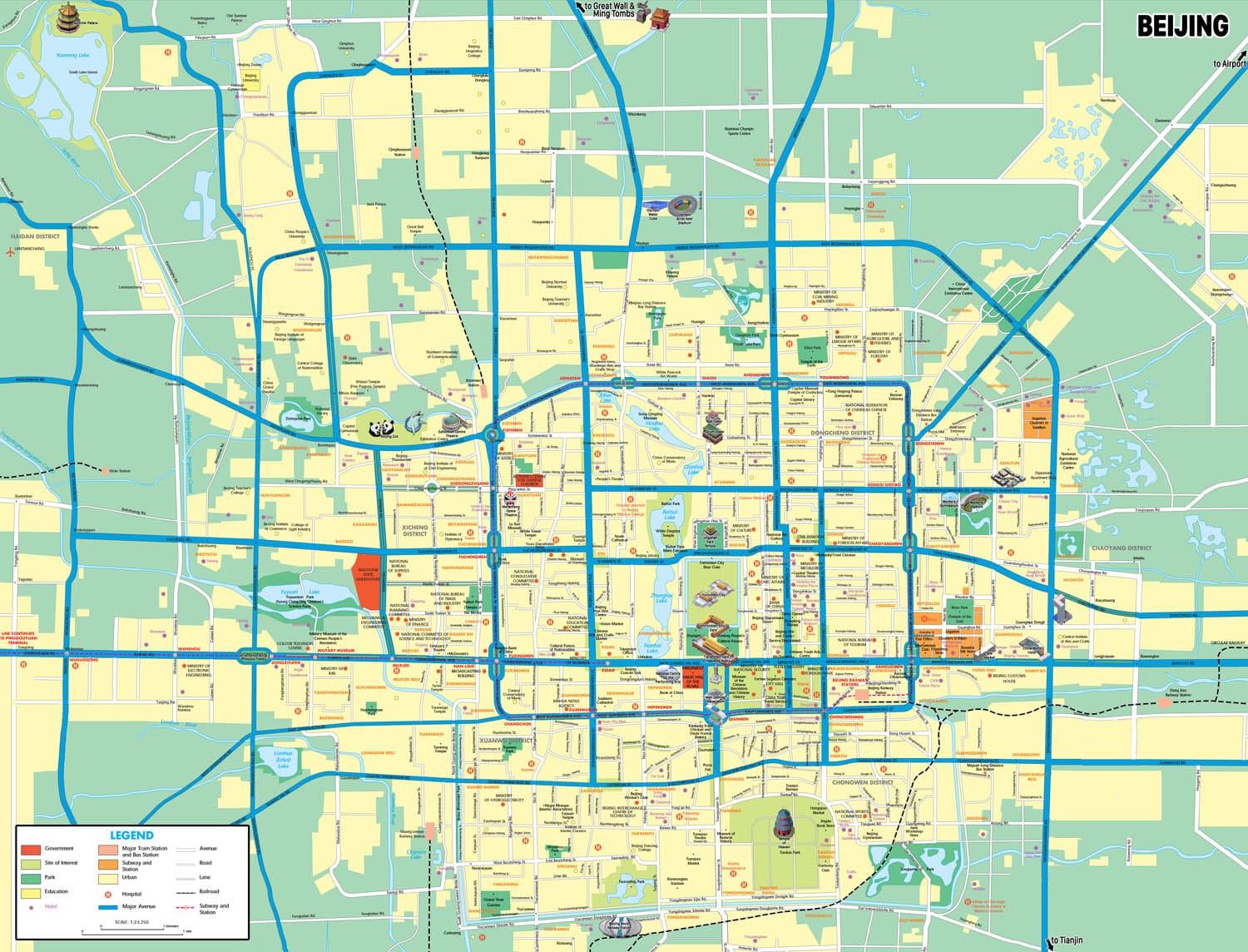 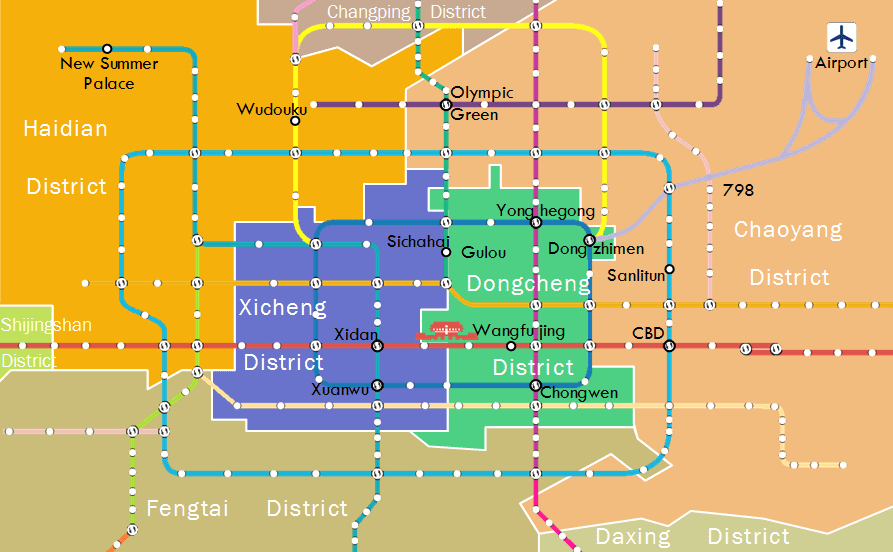 Beijing Municipality is a large region, equal to a province or state, the city is designed around a series of concentric Ring Roads, using the Tiananmen Square and the Forbidden City as it’s centre point, aligned on a perfect north/south axis, and is broken out into a series of primary districts:

Every Minute is Rush Hour

Traffic can be crazy in Beijing, and reckless driving is fairly normal. Loud, persistent honking is commonplace. It is simply another way to indicate that the driver is there. Be prepared for drivers to violate traffic laws even to the extent of going in reverse on highways to back up to a missed exit or driving on a sidewalk. Also expect occasional road debris (a piece of wood or torn out tire) to be laying in the roadway. At night, be careful of missing manhole covers or road work taking place without warning or without proper illumination at night. Pedestrians should be very careful crossing the street people will generally stop for you, but they will honk. Keep an eye on the locals and cross with them — there is strength in numbers. Also note some construction trucks will abuse the speed limit and also are known to at times ignore traffic signals. Proceed when clear, not necessarily when the traffic light is green.

WHAT TO BUY? Jade and Lacquer are known as the four best traditional handiworks of Beijing. In addition, Curios, Silk, Pearls, Snuff Bottles with hand painted pictures Inside, candied Fruits and confectionaries. 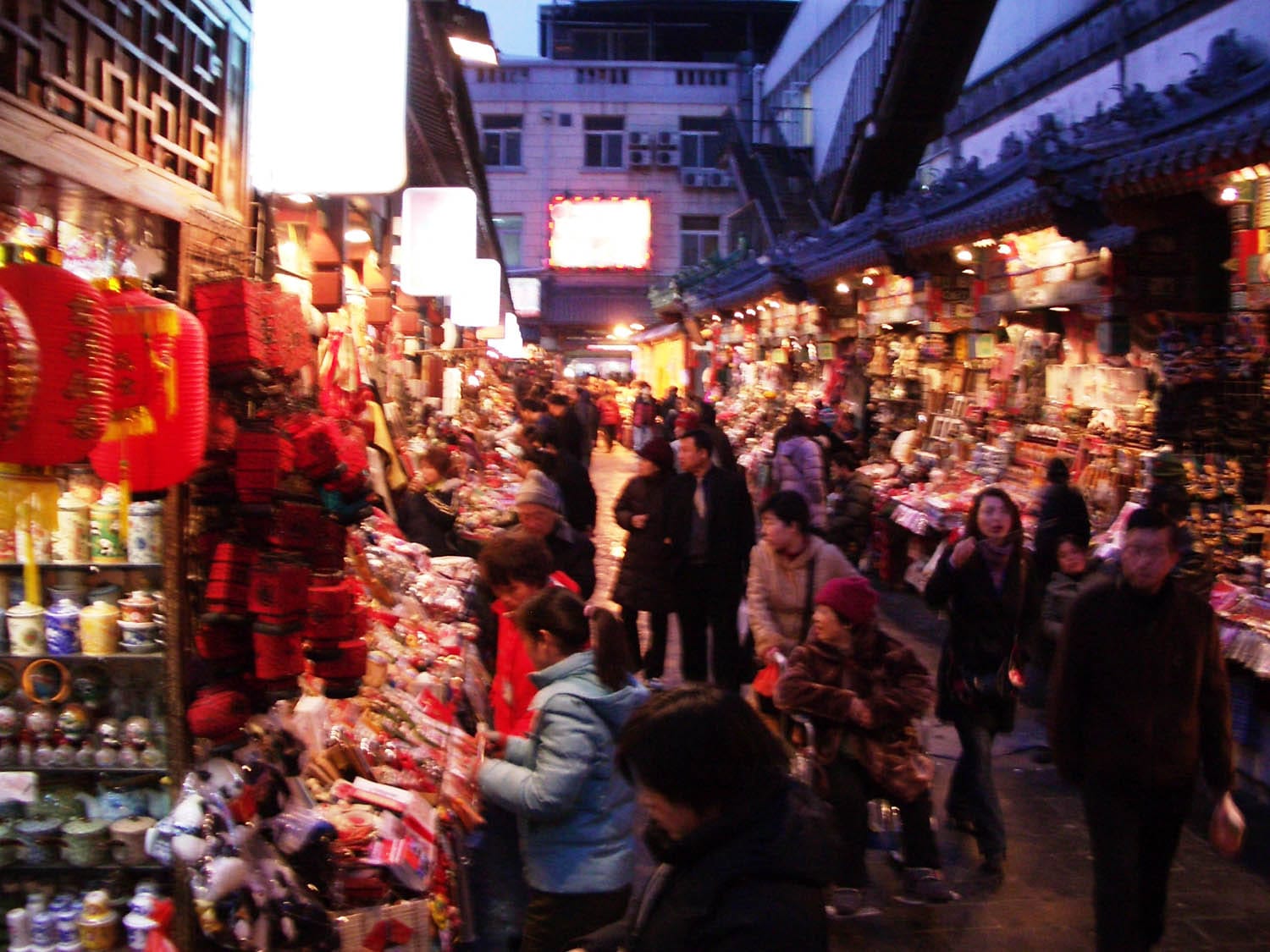 Wangfujing (王府井大街) starts with East Chang’an Avenue in the south and ends with China Art Gallery in the north. This shopping mecca houses a wide variety of shops and boutiques where you find commodities, some of which are of world-famous brands.

The Old Beijing Street which is located on Wangfujing Dajie is an underground street built in Ming and Qing styles. The outstanding characteristic of it is the centralized well-known longstanding stores selling shoes, caps, silk cloth, scissors, Chinese brushes and ink-stick, jade, teas, desserts, pickled vegetables and roast duck.

The Panjiayuan Market is a super shopping market for all Chinese arts and crafts. It is made up of over three thousand individual stalls covering 48,500 square metres. There really is something for everyone here. Even Hilary Clinton has shopped at Panjiayuan. There is a little overlap between stalls so you can compare and bargain but the range of goods is excellent. Stall owners come from twenty-four provinces around China to sell their wares.  Panjiayuan Market is at its best on weekends. Shopping for jade. Stone cups and bowls, Teapots in all shapes and sizes, swords and axes, Stone statues and Buddha’s, Chinese chests and baskets, Chinese paintings and scroll paintings, calligraphy brushes, posters, Chinese books, Porcelain vases hand painted, Rows and rows of Wood boxes and masks… etc.. etc.. 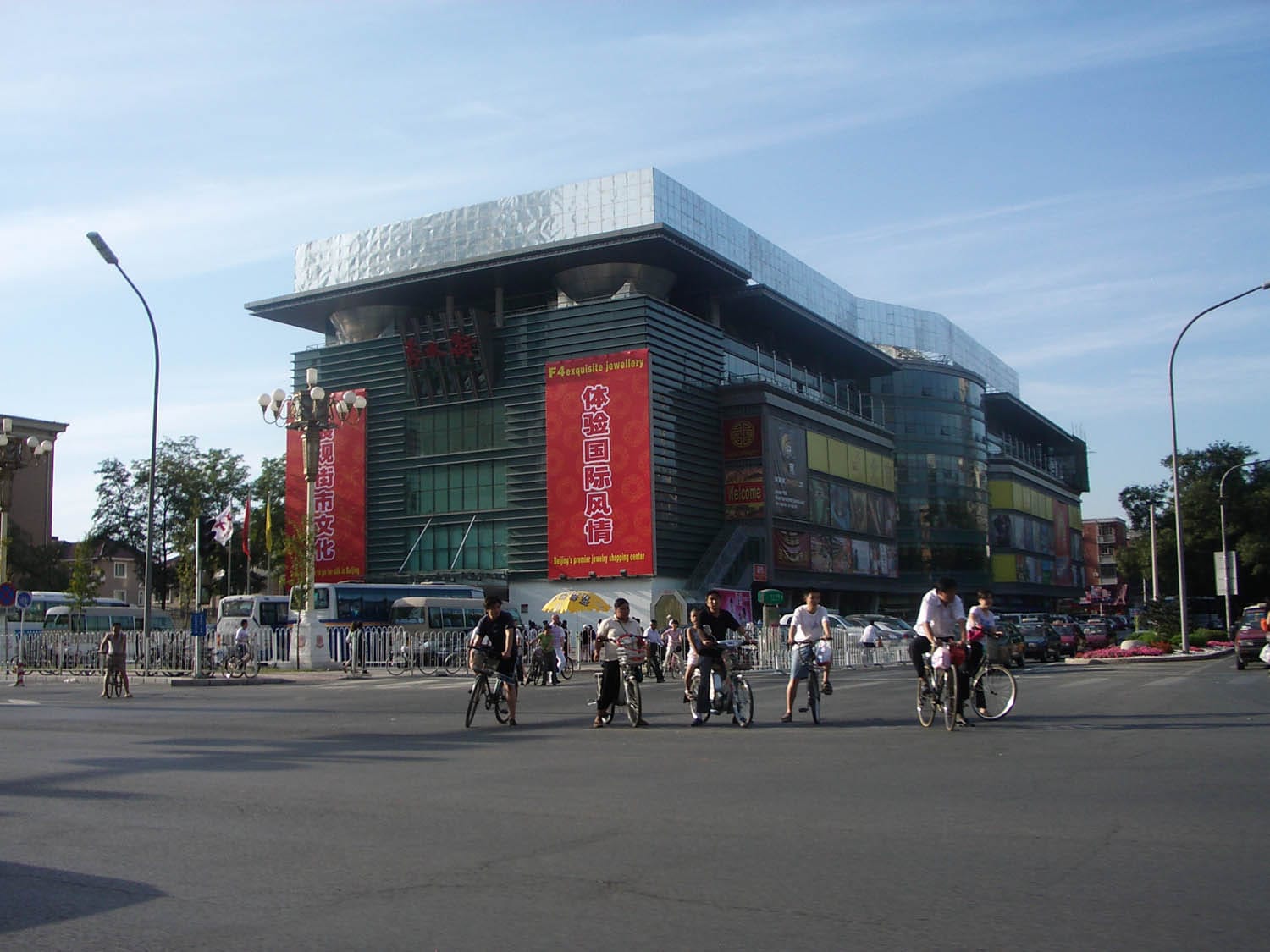 Silk Market, is a shopping market at 8 East Xiushui Street, Chaoyang. Because of its location, it is also called Xiushui Street or Xiushui Market by locals. Used to be an outdoor market, its now a shopping mall, which accommodates over 1,000 retailers.  Even a silk museum was built on the third floor. 18 retailers who have been offering high quality silk over many years are located in the building.  Predominantly making caps, Shengxifu, a ninety-year-old shop, is famous for its selection of material and handmade craftsmanship. And Neiliansheng, established in the Qing Dynasty (1644 – 1911), is famous for its Chinese cloth shoes. On the 3rd floor, you can buy authentic Chinese silk clothes like Tangzhuang suits and cheongsams. Directory of floors includes:

Beijing food has it’s own local style of cooking. 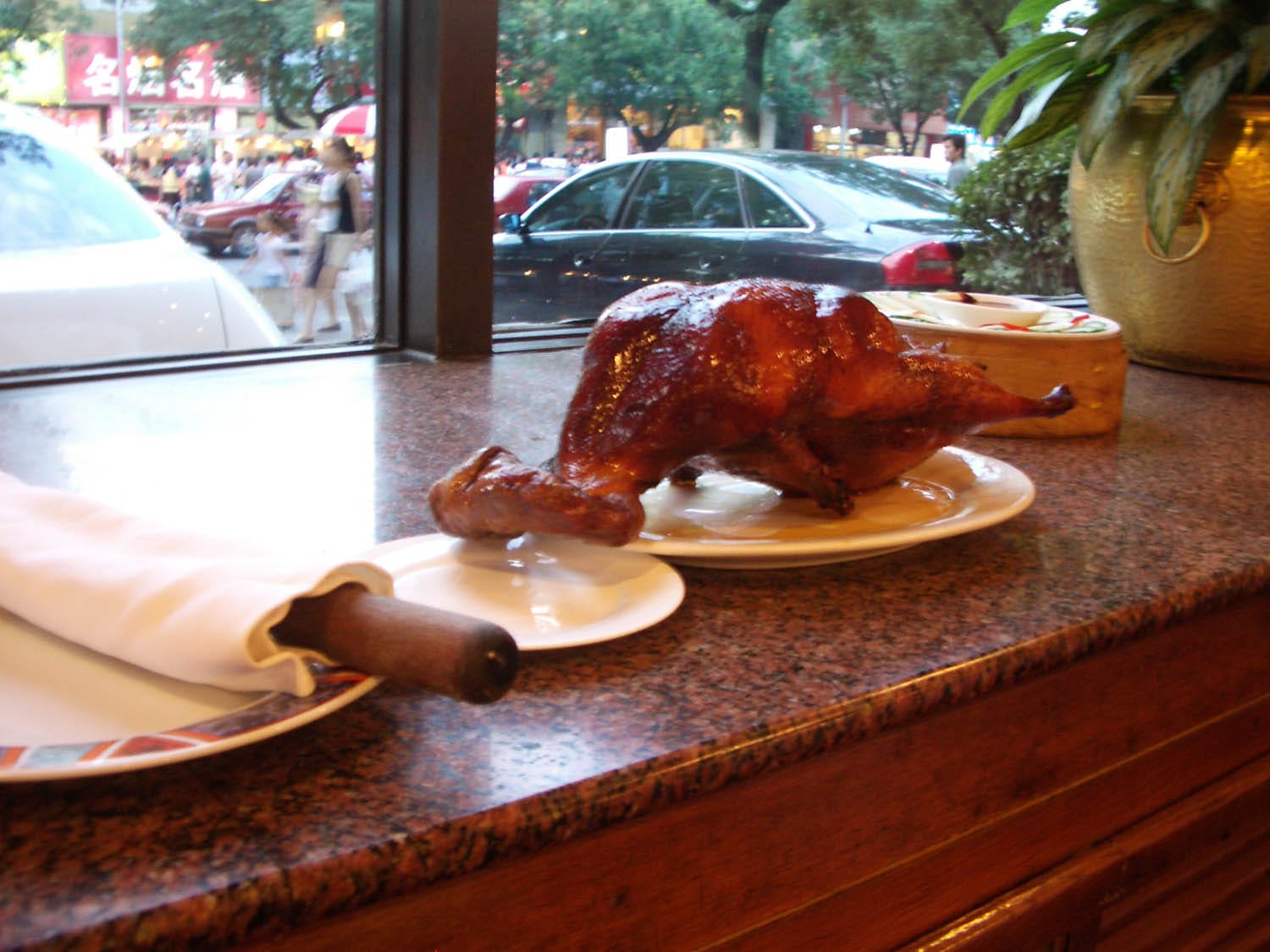 Peking Roast Duck (北京烤鸭) is a famous Beijing specialty served at many restaurants, but there are quite a few restaurants dedicated to the art of roasting the perfect duck. Expect to pay around RMB 160-200 at restaurants. Beijing duck is served with thin pancakes, plum sauce (甜面酱)，and slivers of scallions and cucumbers. You spread the sauce on the pancake, put a few pieces of duck, cucumber, and scallions. The end result is a combination of the cool crunchiness of the cucumber, the sharpness of the scallions, and the rich flavors of the duck.  Quanjude Roast Duck (全聚德) is the most famous roast duck restaurant in China. Once people reach Beijing, they would like to taste the original roast ducks. This is the best place to experience traditional Peking Duck, with every duck being given a serial number to track it’s authenticity.

Savory pancakes (煎饼果子) are one of the most popular street snacks, eaten from morning till night with most carts operating during the morning commute and then opening again at night for the after-club crowds. This is a North China specialty. This pancake (bing) is cooked with an egg on a griddle, a fried dough crisp is added, and the whole thing is drizzled in scallions and a savory sauce. Hot sauce is optional. Not all street vendors are licensed and more than a fair share use recycled oil.

Lamb kebabs (羊肉串儿) and other kebabs are grilled on makeshift stands all around Beijing, from the late afternoon to late at night. Wangfujing has a “snack street” selling such mundane fare like lamb, chicken, and beef as well as multiple styles of noodle dishes, such as Sichuan style rice noodles, but the brave can also sample silkworm, scorpion, and various organs all skewered on a stick and grilled to order.

A winter specialty, candied haw berries (冰糖葫芦 bīngtáng húlu) are dipped in molten sugar which is left to harden in the cold and sold on a stick. You can also find variations with oranges, grapes, strawberries, and bananas, or dipped in crumbled peanuts as well as sugar. This sweet snack can also sometimes be found in the spring and the summer, but the haw berries are often from last season’s crop. 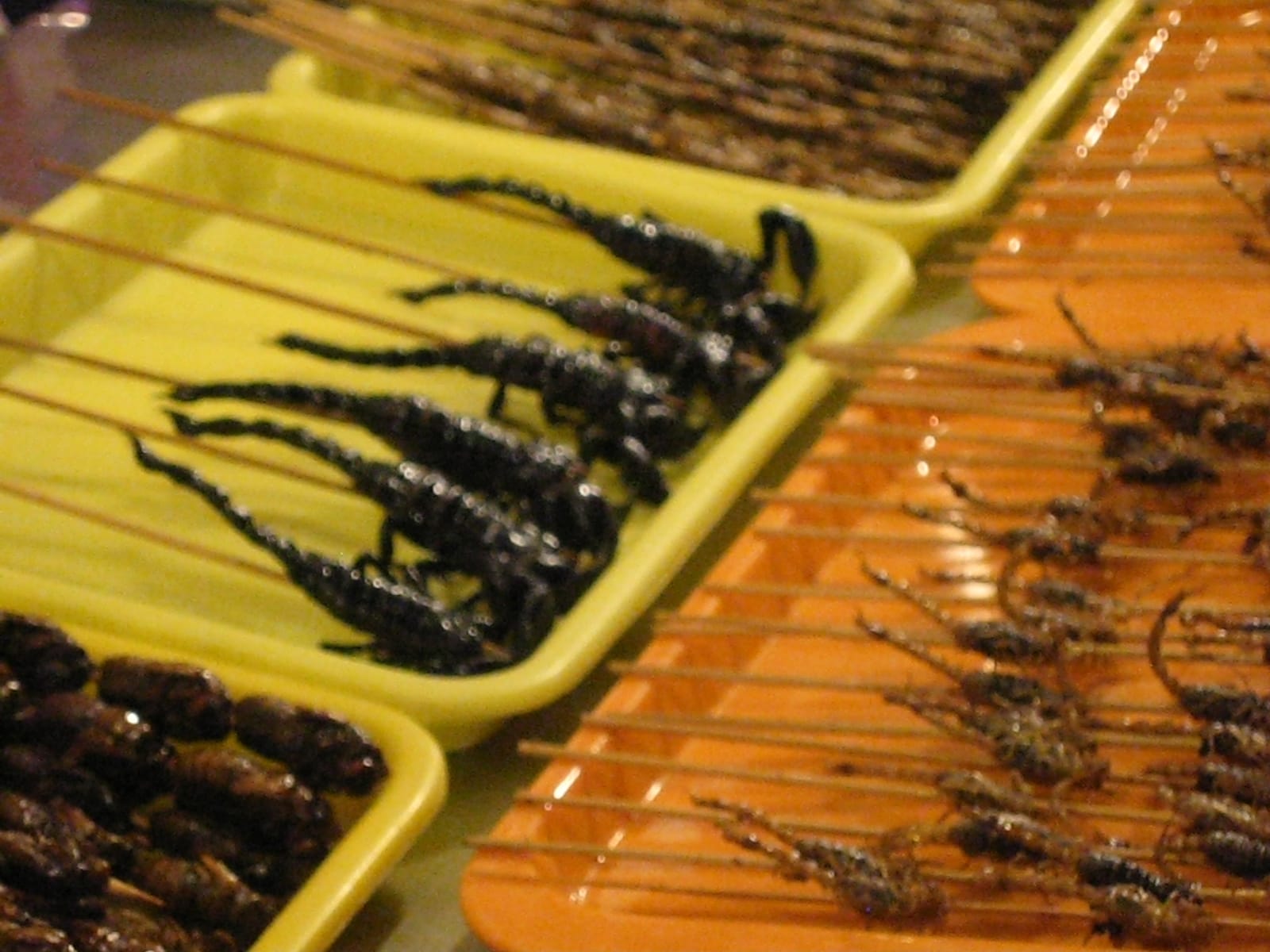 For the more adventurous, Wangfujing Snack Street (王府井小吃街) there is a street with hundreds of snack stands and shops, which mainly sells local insects and reptiles on skewers including scorpions, beetles, starfish, seahorse, centipedes, snakes, turtles, and tarantulas.

Teahouses are common in Beijing.

Beijing Capital Airport – PEK (北京首都国际机场) is approximately 26 km to the northeast of central Beijing.  It is the world’s 2nd busiest airport and has 3 terminals. Travel between Terminals 1 and 2 is via a long corridor with travelators. A free shuttle bus runs between Terminal 2 and 3.  A taxi from the airport should cost RMB 70-120. Get the Chinese name in characters of your hotel. Do join the regular taxi queue and certainly avoid the various touts.

Beijing South Railway Station (北京南站) offers high-speed train services every day to Tianjin, Qingdao, Nanjing, Shanghai, Hangzhou, Fuzhou and other destinations. The station is Beijing’s largest and has plenty of restaurants, cafes, and a bit of shopping to help pass the time.

All official taxis in Beijing have license plates beginning with the letter “B” which is reserved for public transportation vehicles, as in “京B“. Fake or “Black cabs” may look like taxis but their license plates will start with letters other than B. They generally hang out around tourist sights like the Great Wall and the Summer Palace. Black cabs will charge you a much higher fee.

Air pollution is a big problem in Beijing as the Beijing-Tianjin-Hebei area has a lot of industrial production. Coal burning (used to generate majority of energy and heat), automobile exhaust, and dust storms from the Gobi desert combine to make some of the worst city air problems. In winter the cold air creates an inversion layer and traps the pollution in the city. A white surgical face mask may help with the dust storms. A much higher-grade filter is needed to prevent 2.5 micrometer particulates (known as PM 2.5) from entering the body. Tourist are strongly recommended to install iPhone apps that monitor air quality to check hourly and daily reports of air quality index to know what preventative measures are necessary.