If you are looking for a quieter, ultra friendly and more upscale evening in Shanghai to meet new friends, Asia Blue should be your destination between midnight and sunrise.  An alternative spot to the stale LGBT scene of Shanghai, Asia Blue is a hidden gem thriving with local in-the-know Chinese and foreigners, old and young alike.

A very gay local bar with camp decor under an canopy of high-tech LED rods, located at the epicenter of the Gayborhood, across the hall from Lucca 390+ (the upstairs sister to Lucca 390 on the 1st floor).  Asia Blue is the city’s oldest gay bar (having re-located many times) still currently in operation.  Other than owner (and fabulously friendly character) Andy Wong, little English is spoken.  Customers are generally a good mix of age, size and friendly levels.  Lots of dice games, and expect popup karaoke late in the night.  Private KTV room in the raised loft space.

Andy has no interest in packing out the bar and making it compete with it’s very close neighbors Lucca 390, HUNT, Rice, etc…  — he sees Asia Blue complimenting those bars as an alternative space that allows for chill-out before and after in comfort and privacy. For those in the know, Asia Blue has rapidly become the new “Eddy’s” of Shanghai since Eddy’s closed in 2016. Best after midnight. Be prepared to loose track of time and watch the sunrise with your new friends.

In my opinion, entering Asia Blue is like entering Andy’s living room. I go for the friendship with him and his fabulous over-the-top personality. In all the time I’ve known Andy (~15 years), he respectfully treats his bar guests just like we are entering his home. He does not focus on business profit — his focus is on quality of life and fun — for all guests and himself. As long as the bar can maintain it’s monthly costs, he is happy and content.

This is what makes Asia Blue such a rare treat to find in the world — a friendly, local, neighborhood, uber gay, fun and happy environment, where you may not know Andy when you arrive, but you will be a good friend of his by the time you leave.

Other bars cannot be compared — they are more traditional, and are focussed only on profits (door sales, drink margins etc..) — rarely will you ever even see the owner at them. They are run like machines. They are often impersonal. They are often heartless, souless and cold feeling.  I personally don’t like this style and far prefer the friendly sisterhood of Andy and his wide collection of friends that meet at Asia Blue.

Some of my most fun nights in Shanghai were in various Asia Blue iterations.  9:30pm until daylight, daily. 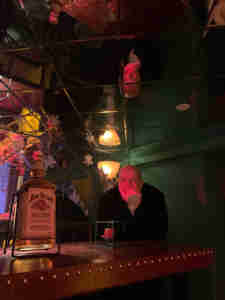