All buildings, either government, residential or business used architecture concepts of feng shui and Taoism as critical guidelines to layout, width, height and construction technique. These principles provides designs of perfect symmetry, hierarchal designations of buildings based on directional facing of it’s doors, use of courtyards or central atriums, use of certain colors, numbers and the directions. Imagery of good fortune are typically added, and play a vital role in the architecture of the building.

There were certain architectural features that were reserved solely for buildings built for the Emperor of China. An example is the use of yellow roof tiles within the Forbidden City, yellow having been the Imperial color. The Temple of Heaven in Beijing, however, uses blue roof tiles to symbolize the sky. The ancient Chinese favored the color red.

Only the buildings used by the imperial family were allowed to have nine jian (間 – space between two columns); only the gates used by the Emperor could have five arches, with the centre one, of course, being reserved for the Emperor himself. Further, the Chinese dragon, was reserved for Imperial China, and heavily used on Imperial architecture, especially on the palace roofs, beams, pillars, doors and walkways.

Chinese imperial roof decorations or roof-figures (檐獸 / 檐兽) are small statuettes placed along the ridge, near the corner, in a line only on official buildings (palaces, government buildings, and some temples). These are usually made of glazed ceramic and form an outward marching procession. Highest possible status imperial roof decoration – man riding bird, nine beasts, immortal figure and dragon. At the tail of the procession will be an imperial dragon, representing the authority of the state. At the head of the procession will be a man riding a Phoenix. In between will be mythical beasts. The number of beasts indicates the importance of the duties performed within the building. The maximum number of beasts is nine which ONLY appears in architecture form on the Hall of Supreme Harmony, being the throne hall and therefore the building with the highest status in the entire empire.

Highly superstitious, Chinese place these so that ghosts do not enter the house, there is always a ledge/hurdle at the bottom of the door which stops ghosts going inside, since apparently ghosts slide, and cannot lift their feet. Also, traditionally men will step through with their left foot first, and women with their right. These architecture ghost blocks can either be permanent or removable (so deliveries can be wheeled through), and typically made of wooden beam or stone.

The number of posts above the door are used to symbolise the status of the person who lived inside, up to a maximum of 12 for the emperor. Typically you will see even numbered Ranking Posts – either 2 (low level official) or 4 (high level official) – but occasionally you will find a single Ranking Post or other odd numbered ones. Look for them in the architecture of Hutongs and older structures.

The main entrances to ancient palaces, temples and mansions have doors with studs arranged in rows. Like other decorations in architecture on traditional buildings, the studs served to indicate ranks in the feudal hierarchy. For example, all the doors and gates used by the emperor have 9 x 9 studs, as the number 9 represented the supremacy of the monarch. Other titled personages, princes and barons had fewer studs on their gates. 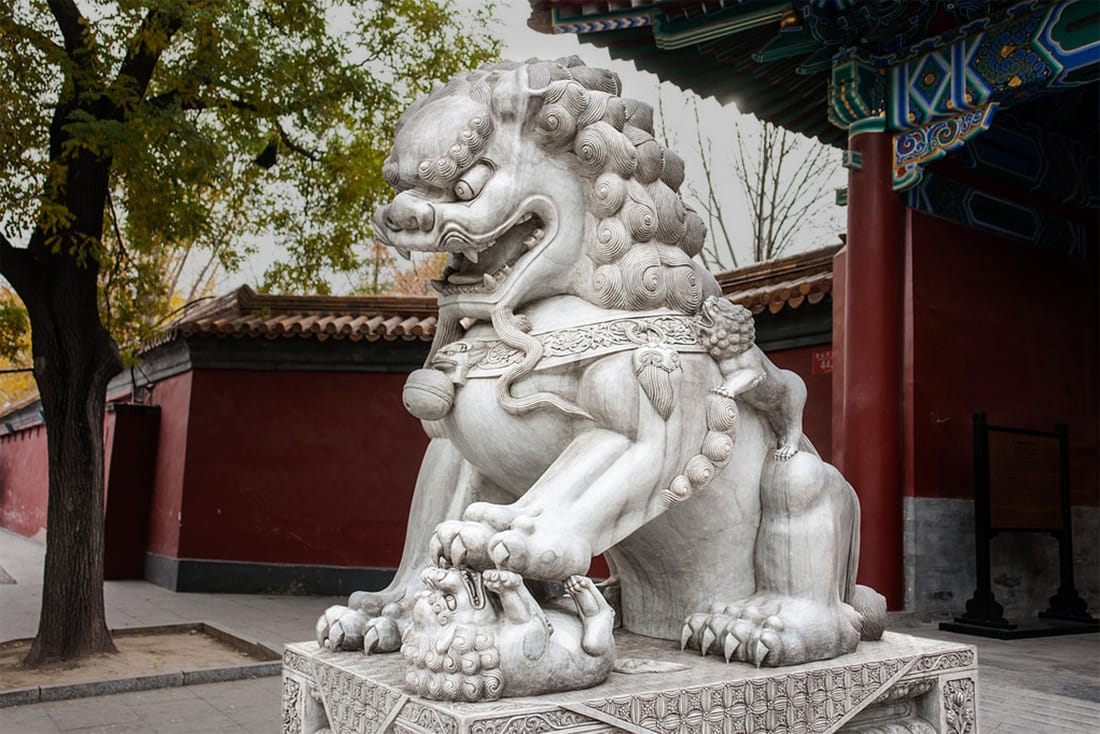 Chinese guardian lions, traditionally known in Chinese simply as Shi (獅 – “lion”), are a common representation of the lion in imperial China. The concept which originated in China, subsequently spread to other parts of Asia. Statues of guardian lions have stood in front of Chinese Imperial palaces, tombs, government offices, temples, and the homes of government officials and the wealthy, since the Han Dynasty (206 BC-AD 220), and were believed to have powerful mythic protective benefits. Pairs of guardian lion statues (yin and yang) are common elements in architecture at the entrances to restaurants, hotels, supermarkets and other structures, with one sitting on each side of the entrance. The pair would consist of a male leaning his paw upon an embroidered ball (in imperial contexts, representing supremacy over the world ) and a female restraining a playful cub that is on its back (representing nurture). Symbolically, the female lion protects those dwelling inside (the living soul), while the male guards the structure (the material elements). Sometimes the female has her mouth closed, and the male open. According to feng shui, correct placement of the lions is important – when looking at the entrance from outside the building, the male lion with the ball is on the right, and the female with the cub is on the left. The claws, teeth and eyes of the Chinese lion represent power. Sometimes you may also see a crane (鹤) near the lions, which is believed to live to a very old age and therefore is a symbol of longevity. A crane standing alone can represent success in becoming a high government official. Because the pronunciation (he) is the same as that for the word “harmony” (he 合), the crane implies harmony.