Toby “Lost in Space” with Apollo 12

Thanks to the extensive family history in my mothers detailed memoirs, flashback memories of long-ago events.  This one was when we were living in Washington DC (my Father was the Australian Defense Attache at the time) — we visited the NASA research facility at Langley Field (still in operation today). 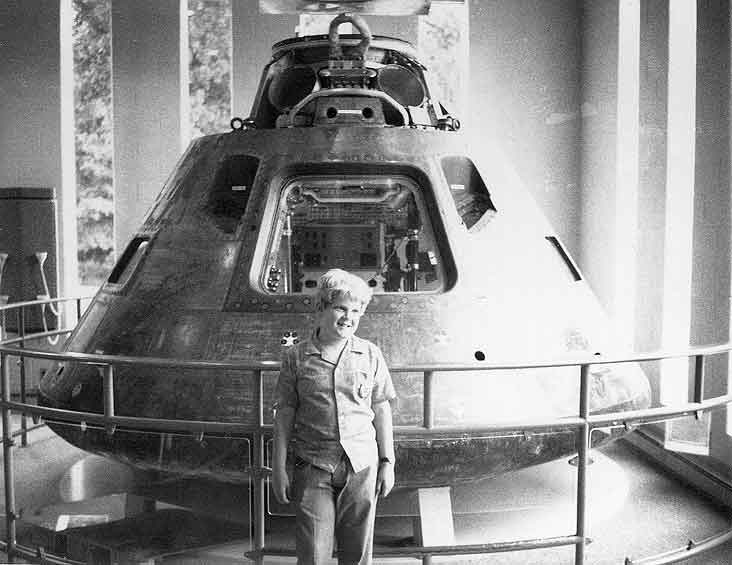 The next day we went to NASA Research Facility at Langley Field, where the Director, Mr. Ritter, gave us a most interesting private tour. We were fascinated to hear of all the discoveries made through space research. So many everyday things which we now take for granted have come about through it.  A wonderful and practical plan for the future is to use infra-red photography from space to show fertile and infertile areas on the earth, pollution, where minerals are, etc. This isn’t just a dream – it’s actually happening, and the potential is enormous.

The most fascinating exhibit was the Command Module from Apollo 12 which was the second manned mission to the moon. On November 14, 1969, Apollo 12 launched from Kennedy Space Center, carrying astronauts Richard “Dick” Gordon, Alan Bean and Charles “Pete” Conrad. The capsule weighed 13,500 pounds at launch, orbited the moon 31 times in 61.6 hours, and traveled 960,000 miles on its lunar mission. Apollo 12 returned to Earth on November 24, 1969 with a successful splashdown in the Pacific Ocean.

Mr. Ritter opened the window hatch and allowed Toby to peek inside the Apollo 12 Command Module, then had a photo of Toby standing next to it, and gave him a NASA baseball cap and Mission 12 badge.   He was thrilled to bits as you can well imagine!