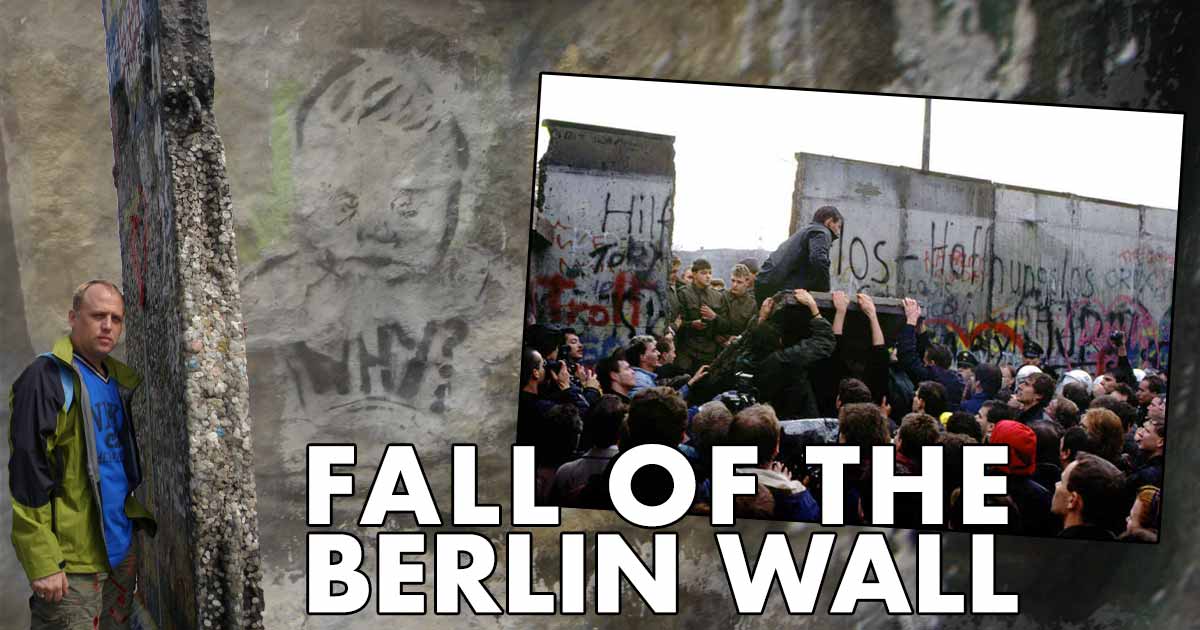 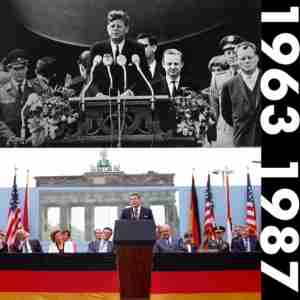 On August 13, 1961, Soviet Premier Nikita Khrushchev gave the East German communist government permission to build a barbed wire and concrete fence between East and West Berlin. Officially it was to keep Western “fascists” from entering East Germany undermining the socialist state, but it primarily served the objective of reducing mass defections from East to West.

On June 12, 1987, President Ronald Reagan challenged the General Secretary of the Communist Party of the Soviet Union, Mikhail Gorbachev to ”Tear Down This Wall”

On November 7, 1989, East German Prime Minister Willi Stoph and 2/3rds of the Politburo resigned. Egon Krenz was unanimously re-elected as General Secretary by the Central Committee.

The Berlin Wall stood until November 9, 1989. On that day, during a prime time live TV public conference at 6pm, the East Berlin party leader and top government spokesman, Günter Schabowski, accidentally announced a mistaken unrestricted new travel policy. In the mayhem & confusion, shortly after, Krenz had no option but to allow citizens to cross the border whenever they pleased. Later that night around 11pm, ecstatic crowds swarmed the wall. Some crossed freely into West Berlin, while others brought hammers and picks and began to chip away at the wall itself.

The events of November 1989 had taken the East German leadership by complete surprise. During demonstrations, East German troops mostly remained in their barracks. Strikes in garrisons, reforms, and major upheaval changed the former “party’s army” considerably. For a brief period in 1990, the Ministry of National Defense was renamed into “Ministry for Disarmament and Defense”.

In July 1990, Mikhail Gorbachev agreed with West German Chancellor Helmut Kohl to grant full sovereignty to a united Germany and acknowledged its right to become a member of NATO. In return for its military withdrawal, the nearly bankrupt Soviet Union received financial and material compensation from the German government and credits from major West German banks to the amount of DM15 billion (about US$8 billion at the time).

On September 12, 1990, the four Allied powers (the victors of WWII), signed the “2+4-Treaty” with the two German states in Moscow. It granting removal of East Germany from the Warsaw Pact on 24 September 1990 and its dissolution and incorporation into the West German army one day before German unification in October 1990.

The reunification of East and West Germany was made official on October 3, 1990 almost a year after the fall of the Berlin Wall, yet the wall remains one of the most powerful and enduring symbols of the Cold War. 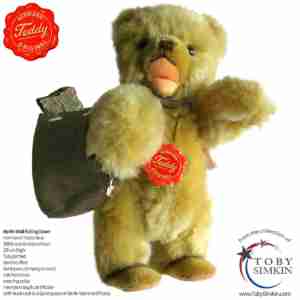 This rare Hermann handmade, limited edition collector teddy bear, in German mohair was added to (and takes pride in) our vast collection shortly after the fall of the Berlin wall…

Its paws were intentionally designed to be bent in order to hang on the wall, and it’s knapsack contains a piece of the Berlin Wall that fell from where it was hanging, along with the signed certificate of authenticity.

updated November 9, 2020 expanding to elaborate on the events following the fall of the wall towards German reunification accordingly.