Airline seats are narrower, less leg room, and stuffier than those in the west.  Be prepared, there is not much choice here. 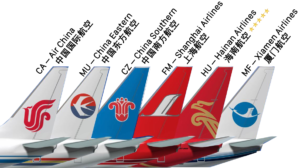 Domestic air travel on major airlines is SAFE in China – due to sudden growth of the industry, the major airlines tend to use newer planes, and opt for A300’s or B747’s largely on most routes.  Airlines are reasonably good – but be warned on smaller city routes, delays and cancellations are the norm.

Try to avoid the last flight of the day, particularly from smaller airports.  They are often canceled and held over to the following morning to combine flights and fill the planes.

Remember your flight number, and listen careful to Chinese announcements referencing the number (in Chinese in smaller airports).

The “air corridor” between Shanghai and Beijing is heavily restricted with only 2 flight paths, that unfortunately intersect over a military training area near Qingdao – as a result, flights between the 2 cities are quite often delayed by 30 minutes to a couple of hours while they await clearance.

Enjoy the pre-flight announcements regarding “please do not throw coins into the airplane engines for good luck” and “please do not open the emergency exit doors on ground or during flight for fresh air” (sic).

Planes will be held in China for Government officials.  So if flying around National Day (October), May Day (May) or National Peoples Congress time (Jan-Feb each year), expect more delays than normal – particularly with flights to or from Beijing. 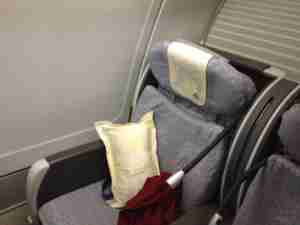 Pack light and warm (remember domestic airline luggage limits of total of 20kg), Many times you’ll be forced to carry your luggage up & down stairs — for instance in subway stations and train stations.  If possible, consider ultra-light 4 way roller suitcase.

Check in at airports for domestic travel is a minimum of 1 hour prior to departure, but given the uncertainty of flight times and language barriers, 2 hours prior is better usually.  Once you are checked in, you need to process through provincial immigration (Public Security) where the police will scan your passport invalidating your previous hotel’s temporary registration permit, and giving you clearance to travel to the next city.

Note that most airport terminals in China are HUGE, and walking to your gate may be a 1km trek.  Be prepared, and look for travelators (if working), or if long distance walking is difficult, pre-book a wheelchair (a wheelchair will also expedite getting through PSB security points, by avoiding long line-ups.)

Also note that the lower star airlines, the further the walk (major airlines pay more for gate fees nearer security and the centre of terminals).  Also, some airlines opt for bus gates, which drive crowded busses to the steps of the plane.

See my notes on WHEN the best time to book airlines tickets to get the best price.   After you have booked, particularly for long-haul flights, consider your seat selection.

When booking, for domestic travel within China, I suggest using cTrip or eLong, and if choice, I recommend my personal ranking based on quality/experience based on first/business class:

Airlines points today are traded like currency — they are valuable and each point adds up.  I strongly suggest that you become a member of each major airline Alliance, and if your particular airline company is not a member of the “big 3” than sign up for the individual airline loyalty program too — it’s all free, and the points add quickly…

Not a member of the “big 3” but given it’s 5 star ranking, and international routes, worth joining.

While joining any or all is free, I suggest only joining one of each of the “big 3” major alliance member airlines.  Pick the airline you are most likely to fly regularly on.