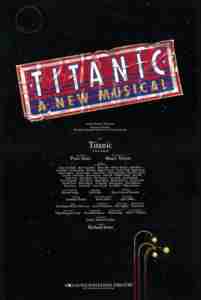 TITANIC with a story & book by Peter Stone and music & lyrics by Maury Yeston opened on Broadway at the Lunt-Fontanne Theatre on April 23rd 1997 and played through March 21st, 1999 achieving 26 previews and 804 performances.