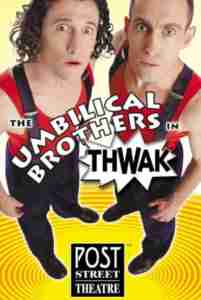 Inspired by cartoons and the movies, THWAK combines physical feats of agility, remarkably accurate aural imitations, and a healthy dose of humor to create a series of set-ups, each more surreal than the last. Using mime, precision lip-synching, uncanny sound effects, pratfalls, high-speed chases, and hand puppets, the duo soar though a raucous hour and a half of comic mayhem. An invisible dog plays catch with an invisible hand grenade (not to worry, the imaginary dog is unharmed, but cleverly replaced by a fake imaginary dog).

Audiences take an audio tour through the intestinal, pulmonary, and cardiac sounds of Collins’ body and the paranoid turmoil of his brain. A battle with a persistent housefly becomes a kung-fu extravaganza worthy of Jackie Chan. Cowboys lose their mounts and Kermit the Frog gets sautéed for dinner. And somehow, in THWAK’s mad world, it all makes sense.

Dundas and Collins, aka The Umbilical Brothers, have been described as “Bugs Bunny and Elmer Fudd on the set of Terminator 3.”  Their partnership dates from their college days in Sydney, Australia; since that time they have performed around the world, created all the voices and sound effects for Nickelodeon’s cartoon series “Maisy,” and appeared on the Late Show with David Letterman and the Tonight Show with Jay Leno. 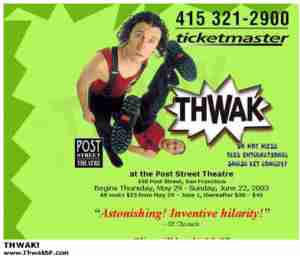 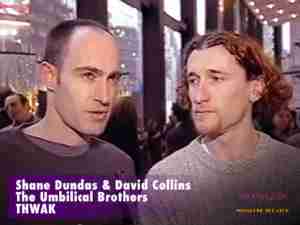 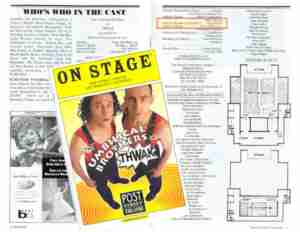