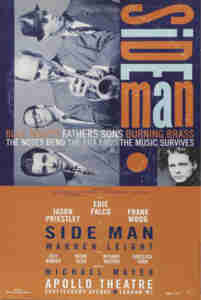 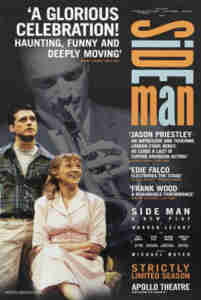 A transfer of the Tony Award-winning Broadway production of Warren Leight’s play Side Man previewed 17 February 2000, Opened 28 February 2000, Closed 10 June 2000 at the Apollo Theatre in London

Set in New York, Side Man is about jazz musicians from their heyday in the 1950’s to their dark years in the 1980’s. This covered the period when many great musicians had to cobble together a mix of club dates, unemployment cheques and cash gigs to make a living. These musicians, known as sidemen, and their families made great sacrifices to serve their passion for music. The play includes jazz classics by Roy Eldridge, Miles Davies, Clifford Brown, Lee Morgan, Donald Byrd, Ella Fitzgerald and Duke Ellington.