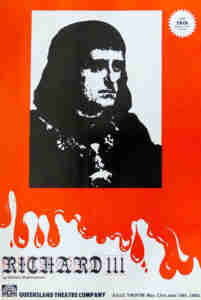 RICHARD III by William Shakespeare from May 23 to June 14, 1980, at the S.G.I.O. Theatre, Brisbane, for the Queensland Theatre Company. 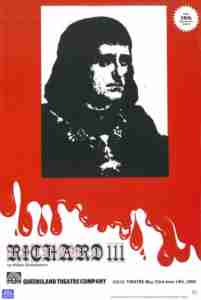 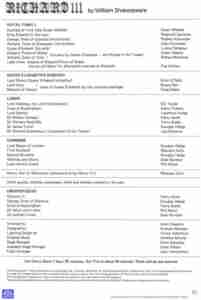 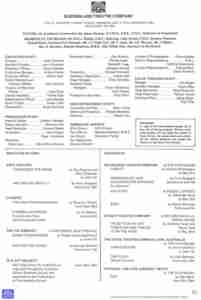 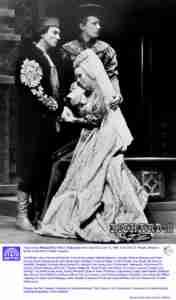 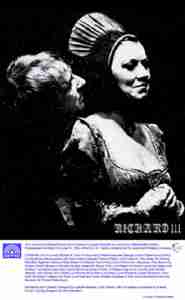 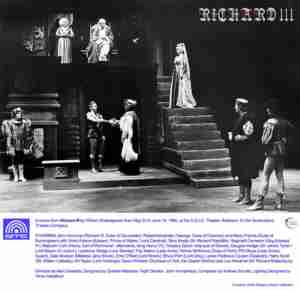 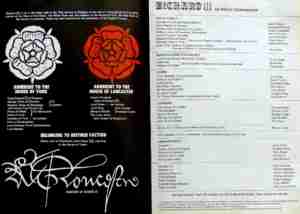 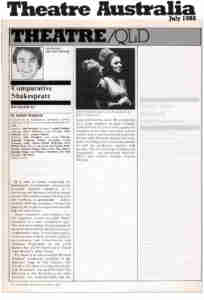 A quick primer on the real Richard III 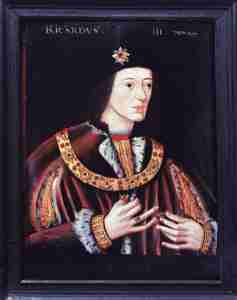 He started off as the 11th child of the Duke of York. He was a prisoner of was at age 7, a general at age 17, and at age 30, he became one of the unlikeliest kings in the history of England, and his death resulted in the end of Medieval England.

Richard III, the last king of the House of York and the Plantaganet dynasty, ruled England from 1483 to 1485. Perhaps better known portrayed as a dark and twisted tyrant in the 1592 Shakespearean play, Richard’s reputation is controversial.

Richard was part of a big family – was the 12th of 13 children. Among his siblings was the future King Edward IV and George Plantagenet – who would later become the Duke of Clarence and engage in several conspiracies against Edward.

Richard III lived in a savage time, born in 1452, right around the outset of the Wars of the Roses. This conflict, which saw the throne of England change hands several times over, would define Richard’s entire life. He was forged in the Wars’ bloodshed, and it turned him into an incredibly ruthless man. It provided the backdrop for his infamous rise to power—and his gruesome end.

Anne Neville sat at the center of the twisted Wars of the Roses. Anne’s father was Richard Neville, the 16th Earl of Warwick. Unbelievably rich and utterly gorgeous, extremely friendly, and an all-around catch, kings on both sides of the War desperately vied for her hand in marriage. Anne eventually found herself as the Queen of England, one of the most powerful people in the country—then it all suddenly unraveled.

The Nevilles were distantly related to the rebellious Richard, Duke of York, the man many believed would become king by the time the Wars of the Roses were over. As such, York sent his two youngest sons, Richard and George, to live and train at Middleham Castle. There, the two boys came to know the sisters Anne and Isabel very well.  In just a few years time, each of the brothers would marry one of the sisters—and yet all of their unions would end horribly.

Young Richard spent an especially long time at Middleham, training to be a knight. Even back then, the Duke of York and Richard Neville might have discussed a marriage contract between Richard and Anne.   Against all odds, Richard and Anne would end up ruling England as King and Queen—albeit for a brief, tragic period.

Richard and Anne made a perfect match, but there was just one problem: The Wars of the Roses weren’t over. Not by a longshot. Despite their shared youth, Richard and Anne would end up on completely opposite sides of the conflict—though they’d cross paths again before long.

King Edward made his brother Richard Lord Protector when he passed. Basically, Richard was supposed to look after the country while his 12-year-old nephew—the new King Edward V—came of age.  Poor Edward V never even got the chance to be king. Richard brought Edward and his younger brother to the Tower of London for “protection”—then promptly threw away the key. Edward IV wasn’t even cold yet, and Richard dealt him a chilling betrayal.

He had his brother’s marriage invalidated, declared that his nephews were illegitimate, and made himself King Richard III instead. 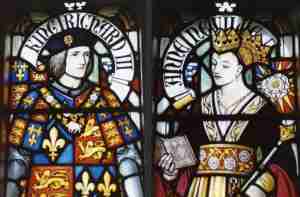 Standing outside Old St. Paul’s Cathedral, a priest announced that Edward IV’s marriage to Elizabeth had been illegitimate all those years. That meant his children, including the two boys now known as the Princes in the Tower, were illegitimate as well, and Richard III was the rightful heir to the throne. The people of London ate up the totally bogus story and demanded that Richard take up the crown. Richard, of course, humbly accepted this burden in light of these shocking new revelations….

Richard was crowned the Archbishop of Canterbury at Westminster Cathedral on July 6, 1483 in one of the most extravagant coronations England had ever seen. Richard has to be one of the unlikeliest men to ever sit on the throne of England. Normally, the crown gets passed down to the King’s oldest son, or brother, or maaaybe daughter. Richard was none of those things. Not only was his father, Richard, Duke of York, very much not the king, but he was also York’s 11th child and 8th son; not exactly high up in the line of succession.

Queen Anne wore a magnificent train behind her coronation dress. She brought one of her most trusted ladies-in-waiting, Margaret, Countess of Richmond, along with her to carry said train. Why’s that interesting? Margaret had a son. His name was Henry Tudor. The same Henry Tudor who would steal the crown from Richard III’s head just two years.

Richard and Anne funded Cambridge University’s King’s College and Queen’s College.  He generously supported the construction of the iconic chapel at Kings College for instance.

On August 22, 1485 at Bosworth Field three armies were laid out before each other. The largest by far were under King Richard III’s banners, numbering between 7,500 and 12,000 men. They faced down the smaller force, likely between 5,000 and 8,000 men, of Henry Tudor, while a third force loomed off to the side, on top of Dadlington Hill. This army, another 4,000 to 6,000 men, was an enormous question mark looming over the day. Richard’s army was divided into three sections, one led by the Duke of Norfolk, one by the Earl of Northumberland, and a smaller force led by Richard himself. But while Richard was an accomplished warrior, Henry Tudor was a stranger to the arts of war. 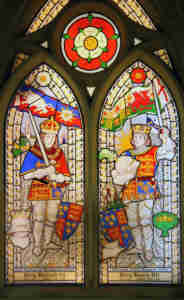 With the battle surprisingly getting away from him, Richard figured that his best chance at victory was to cut the head off of the snake. He took a small group of heavy cavalry and personally charged directly at Tudor and his bodyguard. Henry Tudor was no warrior, but Richard had seen many battles throughout the Wars of the Roses, and he was out for blood. It appeared that Bosworth Field was going to be determined in a skirmish between the two actual men that were vying for the crown.

Richard fought with a wild abandon. He killed Henry’s standard-bearer, Sir William Brandon, in his initial charge. He unhorsed his brother’s old standard-bearer, the imposing John Cheyne, striking him in the head with a broken lance. Henry’s bodyguard was not prepared for such a sudden and vicious attack. Henry himself got off his horse and attempted to blend in amongst his men so he would be less obvious of a target.

Richard fought on, and he even managed to get within a swords-length of his rival, the helpless Henry Tudor. But Henry’s bodyguard managed to keep the warrior-king at bay. Even after Richards horse had tumbled into the marsh and thrown him to the ground, the king fought on. Reports of that day say that he cried “God forbid that I retreat one step. I will either win the battle as a king, or die as one.” In these final, frantic moments, Richard III was finally cut down in the fray. Different accounts exist as to who delivered the final blow, but it was said to be so brutal that Richard’s helmet was driven into his skull. There were still thousands of men on the battlefield, but the king’s death signaled the battle’s end. His forces completely fell apart and retreated. Henry Tudor was proclaimed king and crowned beneath an oak tree near the field where the battle had been fought. Thus ended the Wars of the Roses.

Thanks to the play, some people associate Richard III’s legacy with the cold-blooded anti-hero who was behind the murder of his nephews (the Princes In The Tower), but the truth is there is no evidence to support he was behind the murders at all.  Some people believe it was Henry Tudor or his mother Margaret Beaufort who ordered the murders of the princes, while others believe it was the Dukes of Buckingham and Norfolk. But let’s not forget that there’s still no proof to suggest that the princes were even murdered in the first place…

Let’s just say for argument’s sake that Richard III did kill his nephews. If he did do it, he royally (excuse the pun) screwed himself and in turn led to the downfall and extinction of the House of Lancaster.  Because Richard III’s only son died at a young age and the rightful heirs to the throne were (supposedly) murdered, Henry Tudor (or the future King Henry VII of England) took the opportunity to seize the throne for himself, leading the Tudor bloodline to reign until the death of Elizabeth I.

Richard III had a reeeeeally crooked back 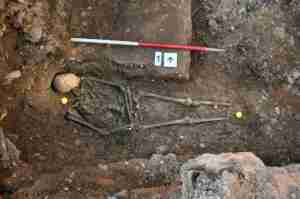 His bones were found under a car park.  When Richard III was killed in the Battle of Bosworth Field during the War of the Roses in 1485, his remains were buried within the former Greyfriars Friary Church in Leicester. But as the centuries went on and the church was demolished, his tomb was “lost”.  In August 2012 the University of Leicester, the Richard III Society and Leicester City Council started an archaeological dig to find the lost grave of King Richard III, and they ended up finding his bones (as well as the original church) underneath the Leicester City Council’s staff car park.

After the discovery of his bones it was clear that apparently Richard III developed scoliosis when he was young, and because of this one of his shoulders was higher than the other, so much so that he wouldn’t have been able to disguise it with his clothing.

Despite his short stature and twisted spine, the 18-year-old Richard III proved himself a warrior at the Battles of Barnet and Tewkesbury. He shined in battle and played a pivotal role in the Yorkist victories. He also revealed his dark side for the first time. After the fighting stopped, several Lancastrian lords claimed sanctuary in Tewkesbury Abbey. Two days after the battle, Richard ordered his men to drag the lords out of the abbey kicking and screaming, sanctuary or no sanctuary. He then had these men unceremoniously executed as traitors to his brother’s crown.

Just five months after Anne Neville passed, Richard III met the forces of Henry Tudor on the battlefield at Bosworth Field. No one expected the upstart Tudor to put up much of a fight, but the unbelievable happened. The battle-hardened King Richard III was cut down in battle, and Henry Tudor became King Henry VII.

The death of Richard III also marked the end of medieval England.

The exhumation licence granted to the University of Leicester made provision for Richard’s bones to be reinterred in Leicester Cathedral where he was interred on March 22, 2015. 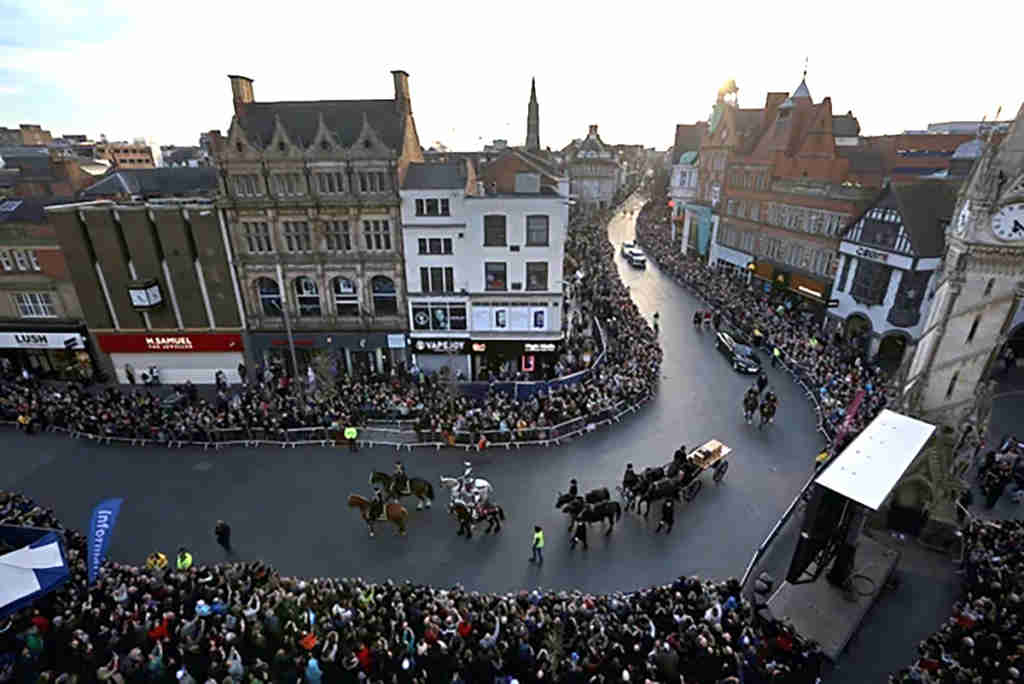