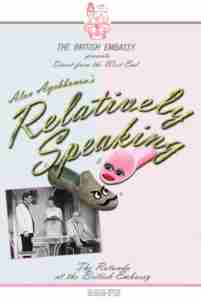 This production was on the heels of Prime Minister Margaret Thatcher’s visit to the embassy with a bomb threat during the run made the production all the more special.

The action of the play takes place during a summer weekend in the bed-sitting room of Ginny’s London flat and on the garden patio of Sheila and Philip’s home in Buckinghamshire, outside London. The time is 1965.

Greg and Ginny find themselves most compatible but she is determined to be off today, against his wishes. She insists she is going to see her parents. Well, Greg just bets he beats her to that address, and he does so. The “parents” do not at first understand him correctly; for Ginny’s parents are really in Australia, and she has come not to visit parents but to tell her former employer and lover that all is over between them: she is going to marry Greg. The “father” finds himself trapped between the two women, and has to play the role of father. But he does not give up easily. He makes a deal with Greg to take his daughter on a tour of the continent as a wedding present. It is at this point that “mother” is given the old pair of slippers left under Ginny’s bed by her “father,” and begins to put two and two together. After the lovers leave and the “parents” are again alone, “father” discovers the slippers, staunchly declares they are not his, and begins to inquire what his wife is doing with the slippers of another man. But this is one secret “mother” will not divulge. A British hit, with reviews describing it as “deliciously heady,” “a near miracle,” and provoking “the proverbial gales of laughter.”