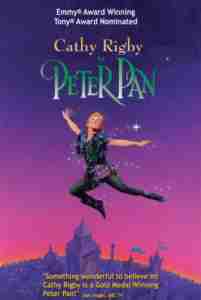 Based on the play “Peter Pan; or The Boy Who Wouldn’t Grow Up” by Sir James M. Barrie, with music by Moose Charlap, lyrics by Carolyn Leigh and additional music by Jule Styne and additional lyrics by Betty Comden and Adolph Green, this exhilarating revival of PETER PAN played the Marquis Theatre from November 23, 1998 until January 3 1999 for 5 previews & 48 performances.

PETER PAN again returned to Broadway a few months later to re-open at the Gershwin Theatre on April 7 and played through August 29, 1999, a further 166 performances, in the middle of a national tour.

In 1929, the author, Sir James M. Barrie presented all rights to “Peter Pan” to the Great Ormond Street Hospital for Sick Children in London, which continues to receive income from royalties from all of the various productions mounted all over the world. A royalty means a percentage of the ticket price is payable to hospital for performances, published books or films based on Peter Pan wherever applicable. 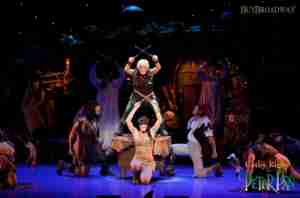 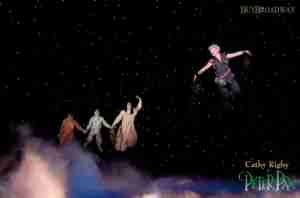 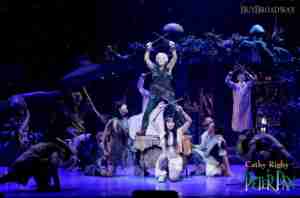 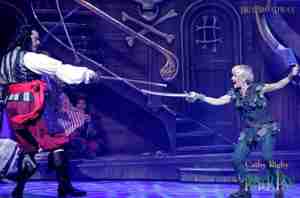 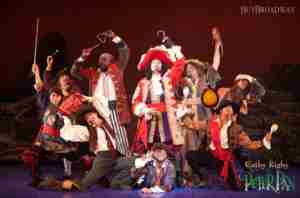 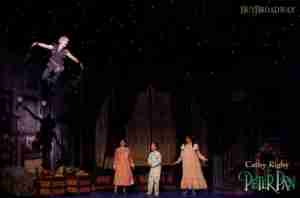 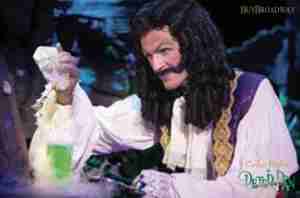 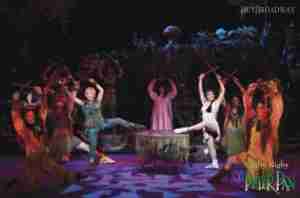 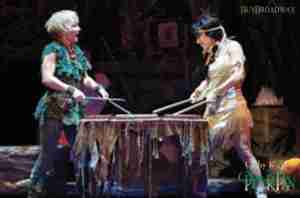 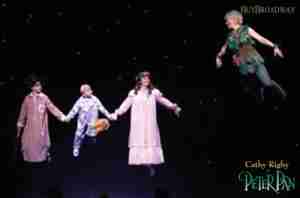 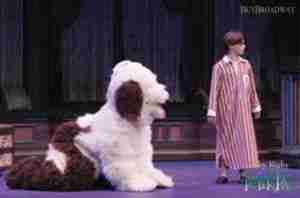 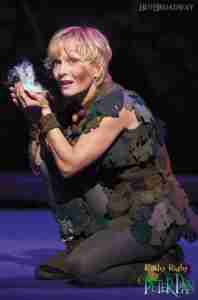 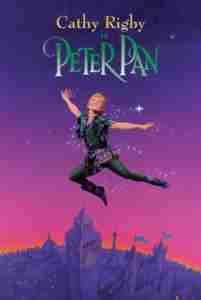 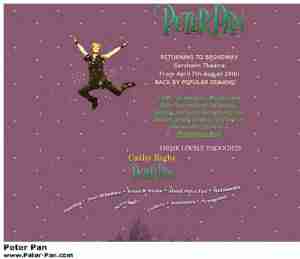 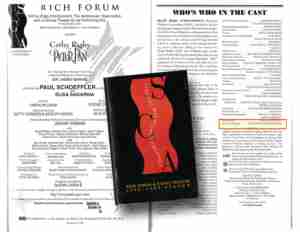 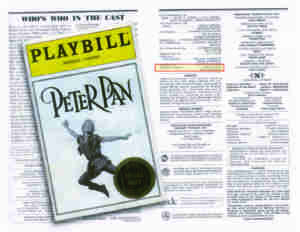 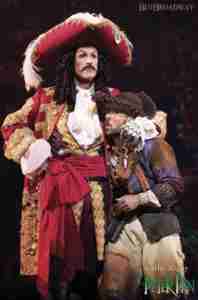 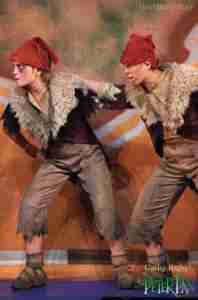 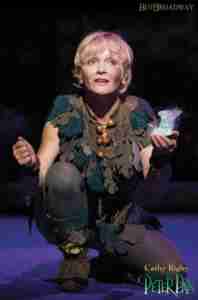 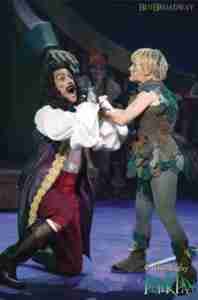 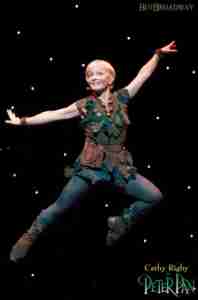 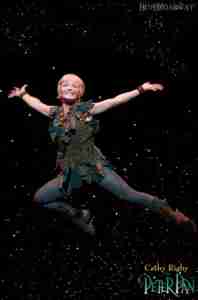 “The remarkable production is as lush and complete and as wonderful as one can imagine! Cathy Rigby’s voice has the range and power to move me and the subtleness to make me tear up.”
-The Orange County Register

“With its perfectly cast roles, crackerjack stagecraft and robust choreography, the show leaps off the stage and into the heart! Cathy Rigby completely embodies the spirit of the forever-young flyboy and from her first swooshing entrance on, you never want to take your eyes -or ears, for she has a fine powerful singing voice -off her!”
-The Seattle Times

“The first major revival to reimagine the show for a new generation and it soars!”
-Detroit News

“Rigby hits new heights in PETER PAN. She was nominated for a Tony Award during her last PETER PAN tour and if anything her portrayal has intensified since then. This is a $1.3 million production that looks like $4 million!”
-USA Today

“This dynamite production is a sharp double-edged sword that makes us laugh with delight while breaking our hearts at the same time.”
-Christian Science Monitor

“PETER PAN sparkles with fairy dust! Rigby has mastered the singing, dancing and aerial shenanigans, but has also gotten to the core of the boy who wouldn’t grow up.”
-The Washington Post

ONE HUNDRED YEARS OF PETER PAN:
A BRIEF HISTORY

The story of Peter Pan has always held a special fascination for children of all ages, and with good reason -it offers a swashbuckling adventure combined with some of man’s most secret desires, to fly and explore another world somewhere beyond the stars, and never to grow oldDidier C. Deutsch, American theater historian

The character of Peter Pan was first mentioned in a 1902 book by Sir James M. Barrie (he was knighted in 1913) entitled “The Little White Bird.” In 1904, the character of Peter was perfected and became the lead character in the full length play, “Peter Pan, or The Boy Who Wouldn’t Grow Up.” In 1906, the section of ‘The Little White Bird” that originated Peter Pan was published separately as a book called “Peter Pan in Kensington Garden.” Then in 1911, Barrie turned his popular play “Peter Pan” into a novel called “Peter and Wendy.”

James Barrie never had his own children (one of the reasons his marriage to actress, Mary Ansell ended in divorce), but spent a great deal oftime playing with the children of his good friends, Sylvia and Arthur Llewelyn Davies. He loved to create skits for the children’s entertainment. It was while writing and acting out skits with the Davies children that Barrie developed the characters and plot he would use in the writing of the full-length play version of “Peter Pan;”

Barrie even acted out the part of the over-the-top comic villain Captain Hook to the delight of the boys. As he explained in his dedication to the play, “I made ‘Peter Pan’ by .rubbing you (the Davies boys) violently together, as savages with two sticks produce a flame.” (Of the five boys, Peter was the one most closely linked with his fictional namesake, an identification he hated all his life. Though he was a highly successful publisher, Peter spent most of his life depressed and committed suicide in 1960.)

Barrie also drew his inspiration from the boys’ parents. He modeled Mr. Darling after the young lawyer, Arthur Llewelyn Davies. Mrs. Darling was based on the refined, nurturing mother Sylvia Davies.

After Sylvia and Arthur’s early deaths, Barrie adopted their five boys. Wendy, who was modeled after a young girl name Margaret Henley, had died at a very early age. The name Wendy originated from Margaret calling Barrie her “Freindy” which, when you add a lisp, comes out “Fwendy” -thus, we have Wendy.

The play also has strong roots in the reality of Barrie’s life. Like Peter Pan, Barrie was a boy who refused to grow up. He took such elements of life as his awkwardness with, yet dependence upon women, his love of children, and his own longing for childhood, shaping these elements into one of the most-loved stories of all time.

Barrie came up with the last name Pan based on Greek mythology. Pan was the Greek god that symbolized natural forces. Pan was the ancient god of forest, flocks and shepherds. Peter’s enchanted Pan-side granted him the power to remain a child forever.

Despite the quality and originality of the piece, Barrie still had a hard time getting it produced. Unlike today, plays in 1904, usually did not have special effects like flying and major scene changes.

Finally, English producer Charles Frohman agreed to produce the play. He cast one of England’s most popular actresses, 37-year-old Nina Boucicault as Peter. Nina’s brother, Dion Boucicault , directed the first production, giving the cast only a few pages of script at a time. He was a perfectionist as a director, often having cast and crew rehearse up to 15-18 hours at a time.

Even with its major technical requirements and unique plot and characters, “Peter Pan” was a great success. It was a big hit throughout England and then in the United States in 1905, with famed actress, Maude Adams, performing the lead to great critical acclaim.

Throughout its history, the role of “Peter Pan” has continued to be played by grown women. Such actresses as Pauline Chase, Jean Forbes-Robertson, Hayley Mills and Maggie Smith performed the role in London.

The first musical version of “Peter Pan” came to New York in 1950. This version starred Jean Arthur as Peter, Boris Karloff as both Mr. Darling and Captain Hook. The songs were by Leonard Bernstein.

Four years later, another musical version (the one Cathy Rigby now stars in) opened on Broadway at the Winter Garden Theatre. This popular 1954 version was composed by Mark Charlap and Jule Styne and with lyrics by Carolyn Leigh, Betty Comden and Adolph Green. It starred Mary Martin and Cyril Richard. Nine days after the show closed, it aired as a two hour NBC special and was watched by an estimated 70 million people.

Why is “Peter Pan” still so popular all over the world? It might be because it speaks to the smallest child with its spectacle and fantasy, especially the thrill offlying. Older children can also relate to the characters that are their own ages and the great adventures that Peter and his friends have with Captain Hook and the pirates. Adults enjoy “Peter Pan” because it rekindles the magic of the first time they saw it when they were children, and, let’s not forget, the glorious songs and the universal theme of ones desire to never grow up.

For fun, here is my parody of PETER PAN from early 2020 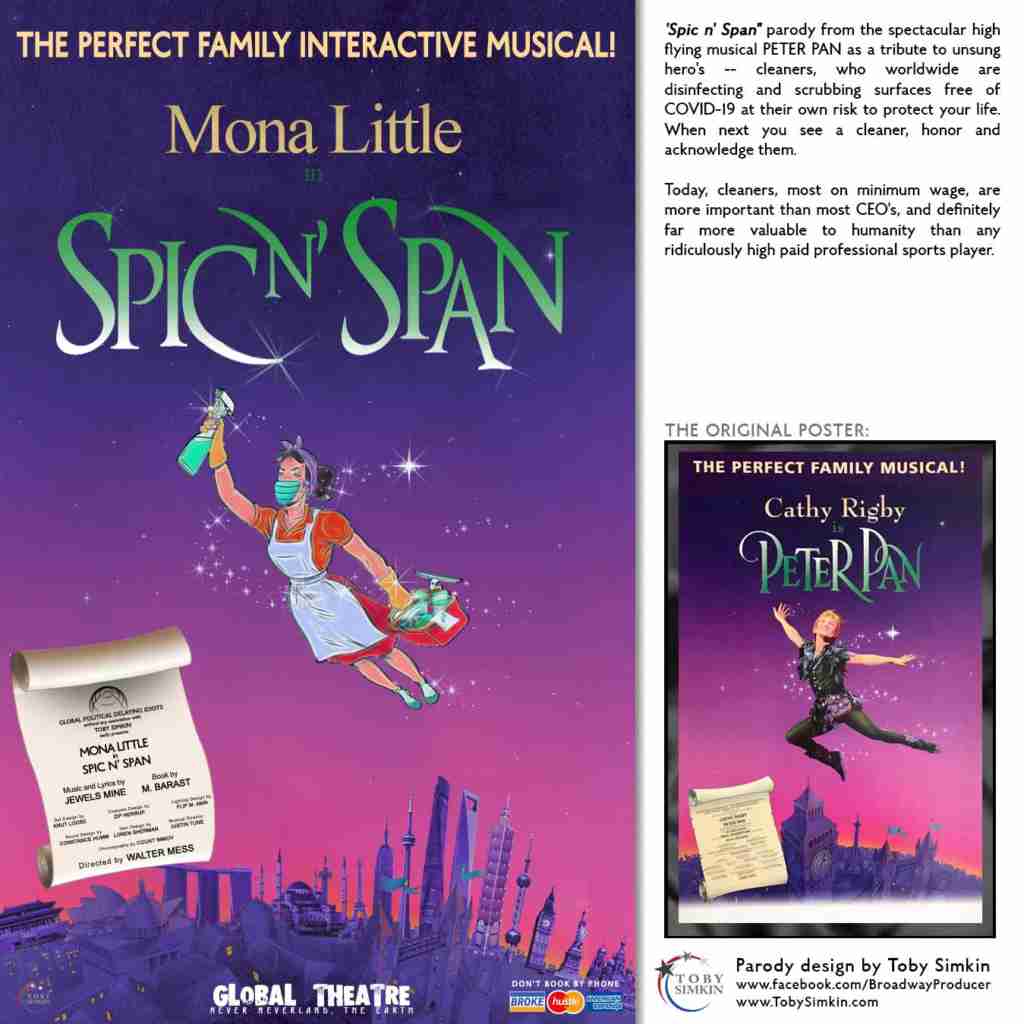