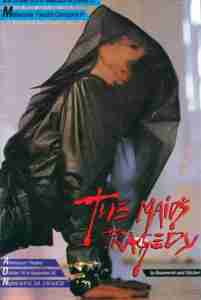 Assistant Stage Manager for The Maid’s Tragedy, a Jacobean tragedy written by Francis Beaumont & John Fletcher, from October 26 to November 26, 1983 at the Athenaeum Theatre for the Melbourne Theatre Company (Artistic Director John Sumner).

Note: Simon Chilvers filled in for a few nights after Peter Curtin fractured his ankle.

Set in Rhodes. The king asks Amintor to break his engagement to Aspatia and marry Evadne, who is sister to his friend Melantius. On their wedding night, Evadne reveals that she is the king’s mistress, cannot sleep with him, wants him to pretend they are married. He later tells Melantius, who urges his sister, now repentant, to kill the king. She disguises herself as her brother, fights a duel with Amintor, who wounds her; as she is dying, Evadne arrives from killing the king, hoping now to be accepted by Amintor but he spurns her and she kills herself. Aspatia reveals her identity and dies.