Kat and the Kings (Broadway) 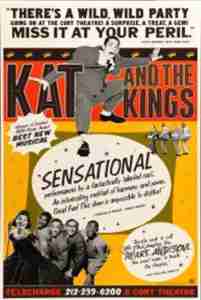 Kat and the Kings (Broadway)

KAT AND THE KINGS with book & lyrics by David Kramer and music by Taliep Petersen opened on Broadway at the Cort Theatre on Aug 19, 1999 and closed on Jan 02, 2000 after 15 previews and 157 performances.

Kat and the Kings is set in late-1950s South Africa, it focuses on teenager Kat Diamond, who believes he’s the best singer and dancer in District Six, a multi-racial slum in Cape Town. With his friends Ballie, Magoo, Bingo, and Lucy, he forms the a cappella group the Cavalla Kings, and the quintet – emulating the American doo wop and rock and roll they adore – becomes a sensation, graduating from street corners to “whites only” nightclubs (where the dictates of apartheid force them to use the rear entrance) and a recording contract.

Kat and the Kings 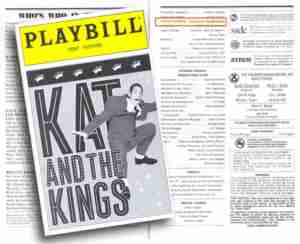