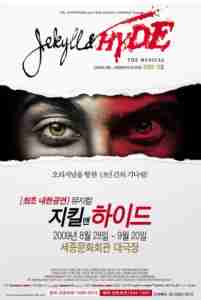 JEKYLL AND HYDE based on the work by Robert Louis Stevenson, conceived for the stage by Steve Cuden and Frank Wildhorn, book and lyrics by Leslie Bricusse, opened in Seoul, South Korea at the 3,000 seat Sejong Arts Centre on August 28, 2009 prior to tour.